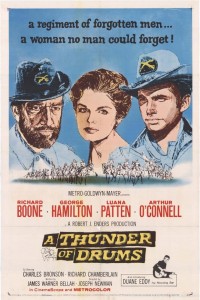 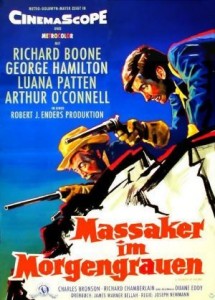 “Bachelors make the best soldiers out here.  They have nothing to lose but their loneliness.”  The line might have been interesting if used once; it’s used twice by Maddocks.  Maddocks leads the garrison on a sortie against the hostiles.  As the lieutenants learn their trade in frontier Indian fighting, there is a climactic battle.  Predictably, Gresham is killed; a little less predictably, McQuade lets Tracey go back east so that he can follow Maddocks’ grim dictum and be a soldier without family entanglements.

There are references to a former officer saying “Never apologize.  It’s a sign of weakness.”  That presumably goes back to John Wayne in She Wore a Yellow Ribbon.  It turns out that McQuade’s father made sure that Maddocks stayed a captain for the rest of his career because of an unspecified mistake long ago.

A bearded Richard Boone is good as the embittered Maddocks, although he’s relentlessly downbeat and mostly hostile.  He’s the center of the movie, as he would be in Rio Conchos three years later, and he’s the primary reason to watch this.  A young George Hamilton isn’t particularly good as McQuade; he will show up again in A Time for Killing, a 1967 cavalry western, as a Confederate major pursued in Utah and Arizona by Yankee Glenn Ford.  Charles Bronson, as a trooper obsessed with women, and Richard Chamberlain (who would soon become famous as television’s Dr. Kildare), as a wounded lieutenant, have small parts.  Arthur O’Connell is probably the strongest supporting player here as a veteran sergeant, the sort of role that would have been played more broadly by Victor McLaglen in John Ford cavalry movies a decade earlier. 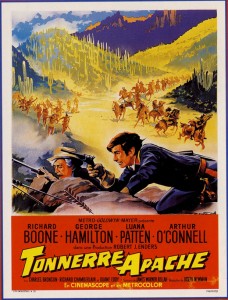 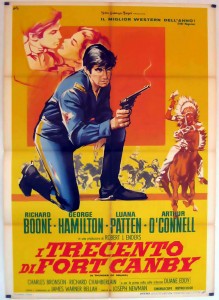 The print was a bit muddy (on Encore Westerns; watch it on TCM, if possible, where they use a better print).  Written by James Warner Bellah, who also wrote The Man Who Shot Liberty Valance, Sergeant Rutledge and the stories for Fort Apache, Rio Grande and She Wore a Yellow Ribbon.  Shot in color in Santa Clarita, California, and near Old Tucson and Sabino Canyon, Arizona.  97 minutes long.  Notwithstanding the title, there aren’t any drums; lots of “talking smoke,” though.