Jesse James and the James-Younger Gang in Movies 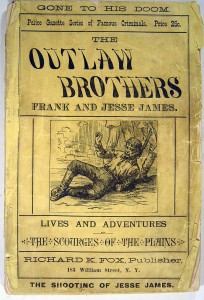 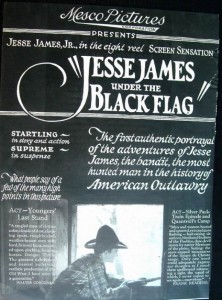 Jesse James has captured the popular imagination since the days of 19th-century dime novels, to the extent that, beginning during his lifetime, he has become one of the two most famous outlaws in U.S. history (with Billy the Kid).  After visiting Jesse’s home town in Missouri, Oscar Wilde wrote in one of his letters home to England that “Americans are certainly great hero-worshippers, and always take [their] heroes from the criminal classes.”  Much like the Australians with Ned Kelly, perhaps.

Jesse and his older brother Frank rode with William Quantrill’s Missouri bushwhackers and with Bloody Bill Anderson during the Civil War.  Frank is thought to have participated in such atrocities as the raid on Lawrence, Kansas, and both of them in the Centralia massacre.  Jesse was not yet 18 when the war ended.  After the war, the brothers formed a gang with the Youngers, robbing banks and trains.  The dime novels tended to depict them as romantic Robin Hood-type figures, but that reputation fit them less than it did, say, Butch Cassidy later in the century.  Some wanted to see them as righting lingering Civil War wrongs, or fighting the railroads and Yankee carpetbaggers that oppressed settlers and farmers in the region after the war, but it’s not clear that they were anything other than outlaws with guns, more successful than most and looking for personal gain and loot.

Jesse was a leader of the gang, a hard man leading other hard men.  He had a flair for public relations, and several of his letters were published in a Kansas City newspaper, burnishing his image.  The gang’s most active period was from 1866 to 1876, when their raid on the bank in Northfield, Minnesota, went disastrously wrong.  His brother Frank was said to have been better (faster) with a gun.  Cole Younger, whom they had initially met while riding with Quantrill, was seemingly just as tough.  As Cole put it after the gang’s Northfield raid, during which Cole and two of his brothers were shot up and captured and only the James brothers themselves escaped, “We tried a desperate game and lost.  But we are rough men used to rough ways, and we will abide by the consequences.” 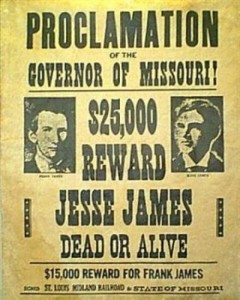 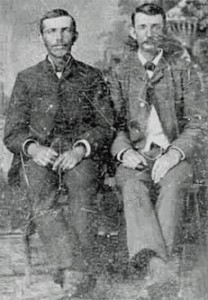 A Missouri wanted poster for the James brothers, and the brothers (Jesse on the left and Frank on the right) in the 1870s.

Jesse was famously killed by Bob Ford, a young quasi-member of his gang, in April 1882, a death that sealed his romantic legend.  Brother Frank stood trial in Missouri and was acquitted (a highly fictionalized version of this process is presented in Fritz Lang’s The Return of Frank James from 1940); Frank later toured with Cole Younger after Cole’s release from jail, lecturing on the evils of their former lives of crime.  (Frank and Cole during this phase are depicted briefly at the end of the remake of True Grit.)

Jesse is hard to depict on film, with his elusive charisma; his brother Frank usually comes across more sympathetically.  If you’ve never seen a Jesse James movie, start with 1939’s Jesse James, with Tyrone Power and Henry Fonda as Jesse and Frank, for the romantic image and very little historicity.  Although there have been some interesting depictions of Jesse and the James gang, the best on film is probably Walter Hill’s The Long Riders (1980).  Perhaps the best performance as Jesse James was given by Brad Pitt in The Assassination of Jesse James by the Coward Robert Ford (2007), a beautifully shot but slow-moving film. 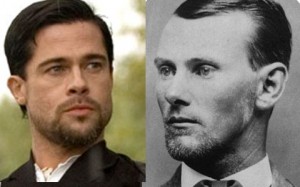 Each generation seems to feel the need to make its own cinematic versions of Jesse and Frank.  Most of these films play fast and loose with the actual history of the James brothers and their gang, and many of them are pretty bad as movies.  (See, for example, Jesse James Meets Frankenstein’s Daughter [1966], directed by William “One-Take” Beaudine.)  Jesse James was often used as an incidental character in completely fictional movies, as in Fighting Man of the Plains (1949), where he (played by Dale Robertson) rides in at the end to rescue Randolph Scott from hanging.  His long exposure in dime novel stories and his colorful end are such that he easily lends himself to fiction.  The most historically accurate so far is probably The Long Riders again, which uses four sets of actual brothers to depict the brothers involved with the James gang.

If you want to know how it really was with Jesse, the definitive biography to date is Jesse James:  Last Rebel of the Civil War, by T.J. Stiles (2003).  A recent engaging account of the botched Northfield, Minnesota, raid is Shot All to Hell:  Jesse James, the Northfield Raid, and the Wild West’s Greatest Escape, by Mark Lee Gardner (2013). 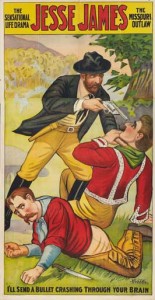 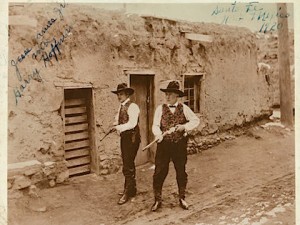 Jesse James as the Outlaw (1921, again with Jesse Edward James) 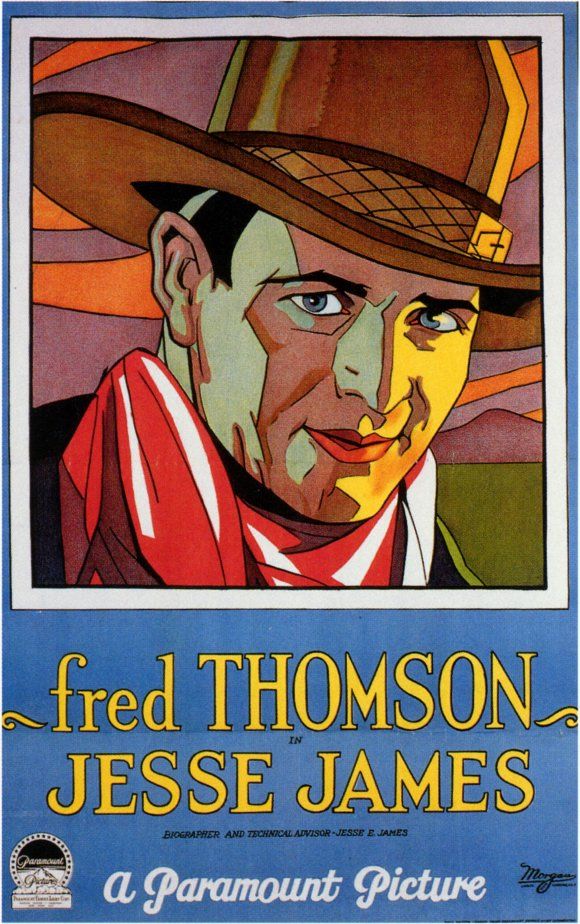 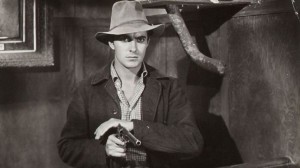 Robert Wagner as Jesse and Jeffrey Hunter as Frank in The True Story of Jesse James.

The Assassination of Jesse James by the Coward Bob Ford–Brad Pitt, Casey Affleck (2007) 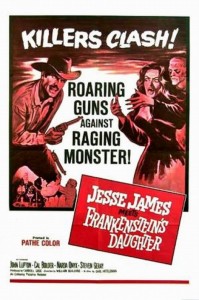 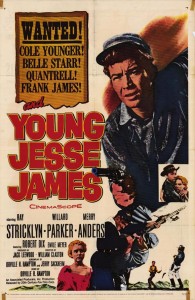 Actually, Quantrell (normally spelled Quantrill) wasn’t really wanted because he was dead by the end of the Civil War.  A lot of people wanted to kill him during the war, though.