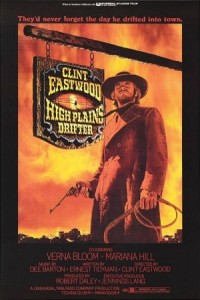 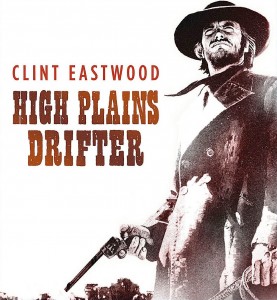 Ben Manciewicz referred to this as an “allegorical morality tale,” heavily laced with understated mysticism.  It was the second movie directed by Clint Eastwood, his first western as a director, and the movie by Eastwood that most overtly shows the influence of Sergio Leone, one of his mentors.

This first shot is Leone-esque, with a lone rider approaching the camera from a distance through a haze.  (There will be a bookend of that shot at the end of the movie, with the lone rider leaving at a distance into a similar haze.)  Clint Eastwood is the Mysterious Stranger, one of his specialties, and, as with the earlier Leone trilogy, he is never really named.  He rides into the mining town of Lago (“Lake”), where the general vibe is fearful and unfriendly.  After an initial drink, he goes to get a shave and bath.  At the barber shop, three thugs insult and attack him until he shoots all three of them.  Outside he is repeatedly insulted by Callie Travers (Marianna Hill); he drags her into a stable and rapes her, although she appears to get into it. 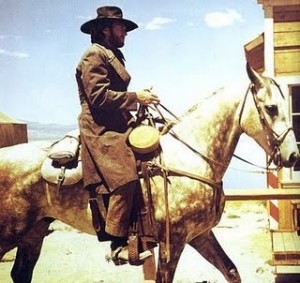 The Mysterious Stranger rides in.

The name Billy Borders is mentioned to the Stranger:  “Don’t know the man,’ he confesses.  “You didn’t have much time to,” the sheriff replies, “because you shot him yesterday.  Billy, he wasn’t a loved man.  He didn’t have much personality and what he did have was all bad.”

It turns out that the three thugs had been hired by the town to defend it against three outlaws (Stacey Bridges and the Carlin brothers) being released from the territorial prison, and whom the town suspects harbor resentments against the citizens of Lago for sending them to prison.  Now the citizens approach the stranger to defend them, promising him anything in town that he wants.  He puts that to the test, giving blankets and candy to Indians and taking new boots for himself, and requiring the town to paint all building and structures red.  He appoints the town dwarf Mordecai (Billy Curtis) sheriff and mayor.  As he sleeps, the Stranger dreams of a man with a badge being whipped to death by three men with bullwhips.  Various townspeople refer to young Marshal Duncan, who was killed by being whipped to death.  There is some kind of collective guilt in their past related to this event.  The Marshal had discovered that the basis of the town’s prosperity, a mine, was actually on government land and not on the private property owned by the town.  He was going to report this to the authorities, so no one felt obliged to intervene when he met his vicious end.  His body is now lying outside the town in an unmarked grave: “They say the dead don’t rest without a marker of some kind…  He’s the reason this town’s afraid of strangers.”  The Stranger sees it differently:  “It’s what people know about themselves inside that makes them afraid.”

The Stranger is not a typical western hero, but a morally ambiguous man given to cruelty.  He also rapes Sara Belding, who deserves it even less than Callie Travers, but who similarly seems to get into it.  Some of the townspeople turn on the Stranger, and he blows up three who try to kill him in his hotel room.  He shoots and wounds at least one of another group of assailants, who escapes out of town only to be killed by the three approaching outlaws.  The Stranger sets up the town’s defenses but leaves before the outlaws arrive.

Mordecai:  “What happens after?

The Stranger:  “Then you live with it.”

[Spoilers of a sort follow.]  The citizens are unable to carry out the Stranger’s plan, and the three outlaws take over, with several of the townspeople being shot or otherwise killed.  With much of the town in flames, as the outlaws drink in the saloon a whip comes out of the night and drags out one outlaw standing near the bat-wing doors.  Sounds of him being whipped to death are heard, and we see his body lying in the street.  As the two remaining outlaws hunt the source of the whip, it comes from above, wraps around the neck of one and lifts him off the ground, hanging him.  That leaves only the outlaw leader Stacey Bridges (Geoffrey Lewis), who sees the long-coated stranger, pulls a gun on him and is shot several times for his pains.

As the Stranger leaves Lago, he passes the sign where the town name “Lago” has been painted over in red with “Hell.”  Mordecai is putting the final touches on a tombstone in the local cemetery as the Stranger rides past.  Mordecai says, “I still don’t know your name,” and the Stranger responds, “Yes, you do.”  And the camera shows that Mordecai’s tombstone reads “Marshal Jim Duncan,” who no longer has an unmarked grave.  Among the other graves near Duncan’s are those of S. Leone, Donald Siegel and Brian G. Hutton (director of Where Eagles Dare and Kelly’s Heroes)–all directors of films Eastwood has appeared in to date.  The Stranger rides off into the haze, just as he came. 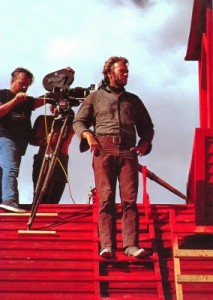 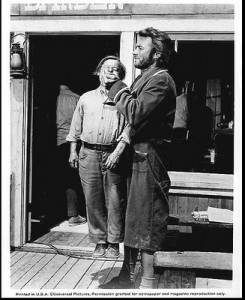 Director Eastwood setting up a scene from the top of a red building; horsing around with Mordecai (Billy Curtis) behind the scenes.

The identity of the Stranger is left ambiguous.  One version of the script had him as Duncan’s brother, but Eastwood liked the ambiguity of not being too explicit and took that reference out.  The Stranger is a figure of heartless retribution for crimes left mostly vague, not an admirable hero.  Echoes of this Stranger will reappear in kinder and more sympathetic form in Eastwood’s Pale Rider more than a decade later.  The camera work (the long shots of lone riders, the frequent tight 2/3-face closeups) are reminiscent of the spaghetti westerns that made Eastwood’s movie career, as are other surreal touches, such as the dwarf.  The heavy ambient noises (the hoofs of the Stranger’s horse, the constant sound of the wind, the disproportionately loud jangle of the Stranger’s spurs, for example) also make it seem like a spaghetti western.  It is the most existential and supernatural of Eastwood’s works as director.  While not his strongest western, it’s a cult favorite in some circles.

It confirmed him on his path to becoming a major director.  He brought High Plains Drifter in two days ahead of schedule and under budget, and it was one of the highest-grossing westerns of the 1970s.  His next western would be the classic The Outlaw Josey Wales (1976).  He was a bright spot in a decade not otherwise known for westerns.  His star was rising as John Wayne’s was fading (The Cowboys [1972] and The Shootist [1976]).  Shot on location at California’s eerie Mono Lake, 300 miles from Los Angeles on the Nevada border.  Bruce Surtees was the cinematographer.  Written by Ernest Tidyman (Shaft, The French Connection).  105 minutes.