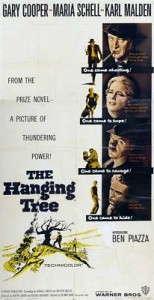 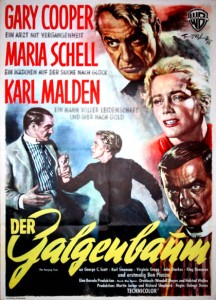 Gary Cooper in one of his last roles plays wounded-in-spirit gunslinging frontier doctor Joseph Frail—apparently not the doctor’s real name.  He comes to the Montana gold camp of Skull Creek in 1873 and sets up his medical practice in a cabin overlooking the town.  It’s a rough place, plagued by outlaws, giving rise in turn to a vigilante movement.  We see quickly that this has resulted in a rough, quick and sometimes misdirected form of justice, represented by the hanging tree.

Doc Frail is known by several of the townspeople.  The town itself is full of undesirables; among them Frenchy Plante (Karl Malden), with whom the doc has some history.  We can tell from the beginning that Frenchy is an undesirable because of the ugly ear-flap hat he wears.  We first see him taking shots at a young man stealing gold out of his sluice boxes.  The doctor takes in the young man (Rune, played by Ben Piazza ) and removes the bullet; as payment he says Rune must be his bondservant for an undetermined period of time. 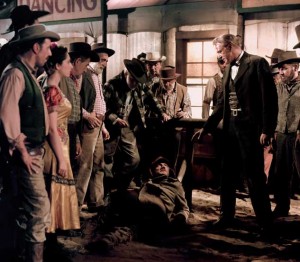 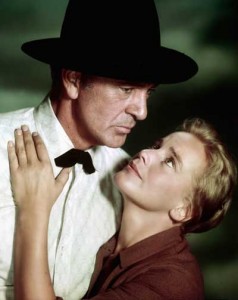 The haunted doctor gambles (he seems to be good at it) and drinks some, and he’s not very good tempered.  Some of his backstory comes out, involving his dead wife and brother and a house on a hill overlooking the confluence of the Ohio and the Mississippi in southern Illinois, deliberately set on fire.  Meanwhile, a stage is robbed and crashes down a hill.  Passengers include Elizabeth Mahler (Maria Schell), a young Swiss woman, and her father.  The father is killed and Elizabeth is left blind and otherwise in bad shape due to exposure by the time she is found.

The doctor takes over her care in a cabin near his.  Aside from those consumed with lust (Frenchy), those envious (Society Red, played by John Dierkes, and George Grubb [George C. Scott in an early role], a faith healer and alchoholic who sees the doctor as competition and a tool of the devil), there is also a self-righteous wife, Edna Flaunce (Virginia Gregg), of an otherwise decent general store keeper, suspicious that there’s something improper going on.  After all, the doc was known to treat loose women, too. 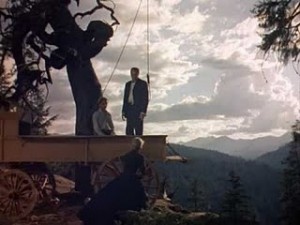 When Elizabeth can finally see again, she and Rune are released by the doctor, who also, unknown to them, provides them with a grubstake.  They use it to set up a mining partnership with Frenchy.  Just as Frenchy is on the verge of quitting for good, they have a big strike.  In the partying afterward, Frenchy tries to rape Elizabeth and the doc shoots him.  Grubb leads a mob to hang the doc; he is rescued when Elizabeth and Rune give the mob their claim.  Presumably the doc and Elizabeth live happily ever after, even without the claim. 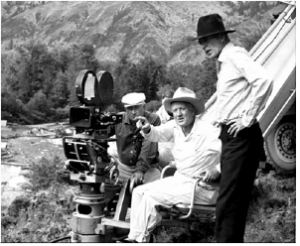 The story is based on a novel by Montana author Dorothy M. Johnson.  Montana native Cooper seems old for the part, as he has for most of his western romantic leads during the 1950s (High Noon, Garden of Evil, Man of the West, etc.), but he’s still effective.  Although Cooper was ill with lung cancer, he’s ironically shown smoking in several scenes.  Maria Schell is very good as Elizabeth, and Ben Piazza is fine as Rune.  The community seems a little too deliberately loathsome and the doctor a little too unreasonably haunted.

Not much seen these days, and the print I saw (on TCM, even, which makes an effort to show the best prints available) was not great.  Still, it’s a pretty decent western.  It’s also one of the last westerns directed by Delmer Daves (3:10 to Yuma, Cowboy, The Last Wagon, The Badlanders) in a very productive career as a director of westerns.   In color, filmed around Yakima, Washington.  Score by Max Steiner, with a theme sung by Marty Robbins (better than most such, and nominated for an Oscar).  Finally released on DVD in 2012. 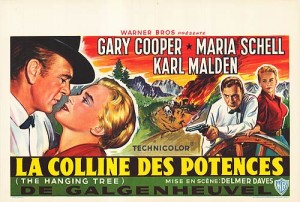