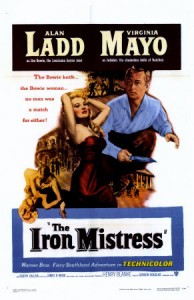 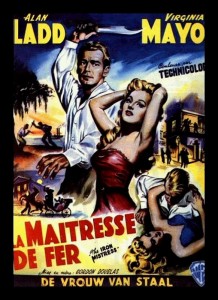 Biopic about Louisiana gambler, land speculator and knife fighter James Bowie, based on the novel with the same title by Paul Wellman.  Shane (also with Alan Ladd in the lead) was made first, but this reached theaters earlier when Shane’s release was delayed.  The poverty-stricken Bowie goes to New Orleans in the 1820s, where he meets poor painter John James Audubon, develops a few social pretensions for his backwoods family, and moves into the fringes of a higher social circle.  Virginia Mayo has one of her best roles as the faithless Judalon de Bornay, a spoiled French creole aristocrat in New Orleans for whom Bowie isn’t socially upscale enough.  Most of the conflict in the film comes from wondering if they’ll ever get together, even after de Bornay marries a weakling.  And from the periodic outbreaks of violence that Bowie’s involved in, which are of course unavoidable as matters of honor but never really his fault.

Finally Bowie has had enough and drifts toward the frontier–specifically, to Texas.  The film ends with Bowie’s marriage to the daughter of the Mexican governor of Coahuila, which includes Texas—not with the Alamo in 1836, where Bowie met his real end and became a Texas hero.  Just before that, dismayed by the carnage he has wrought (and his own not-very-savory reputation), Bowie tosses his legendary knife (the “iron mistress” of the title) into the Mississippi and is done with it forever. 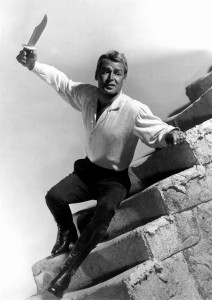 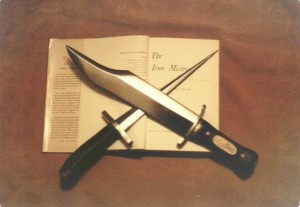 Ladd as Jim Bowie in a production still; the knives used in the film–Bowie’s big Bowie knife and Bloody Jack Sturdevant’s Arkansas toothpick.

Much of this (especially his throwing the legendary blade in the Mississippi) is contrary to history, although the film contains some references to real elements of Bowie’s supposed story:  John James Audubon, the Quaker painter of Mississippi birds and wildlife, for example; the legendary Arkansas knifemaker James Black; the Bowie brothers’ not-entirely-savory history as land speculators; and the Sandbar fight on which Bowie’s reputation as a knife-fighter was made.  There’s a visually interesting sequence in which Bowie, armed with his knife, fights a duel with a man with a rapier in a darkened room, lit only by the occasional flash of lightning through the skylight.  Some writing is clunky, the obsession with Judalon becomes tiresome, and there are several outdoor scenes that were very obviously done on an indoor soundstage, but it’s watchable.  In color, with a score by Max Steiner.  Not really much seen these days. 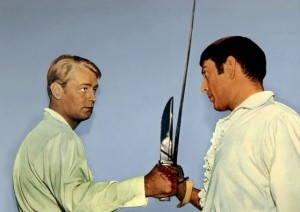 Bowie takes on swordsman Contrecourt in a duel, Bowie knife against rapier, to be fought in the dark.

Alan Ladd is now remembered among fans of westerns principally for his role as Shane, but he made a number of other westerns:  Whispering Smith (the last film version of an often-remade story about a railroad detective), Drum Beat (about the Modoc War), Saskatchewan (with Ladd as a misunderstood Mountie dealing with Sitting Bull’s Sioux in Canada), and The Badlanders (a western version of the caper story The Asphalt Jungle), for example.  For other versions of Jim Bowie on film, see Richard Widmark in John Wayne’s 1960 version of The Alamo or Jason Patric in the 2004 The Alamo (which is a better movie).