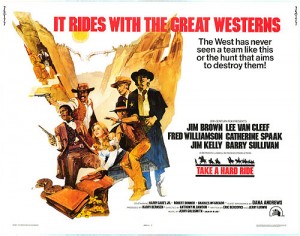 It may have had aspirations, but it’s not really in the league of the great westerns, despite the claims on the posters.

This features another of Jim Brown’s forays into Mexico (see, for example, 100 Rifles and Rio Conchos), this time in a merger of two genres from the early 1970s:  blaxploitation movies and spaghetti westerns.  Jim Brown plays Pike, trail boss for cattleman Morgan (Dana Andrews) in this late spaghetti western.  Pike is also a reformed wanted man in improbable red pants (they must have been a 1970s thing–see Clint Eastwood in Joe Kidd).  He’s trying to take $86,000 into Mexico in fulfillment of a promise to Morgan, who dies early on.

His unwilling accomplice in this task is Tyree (Fred Williamson), a black gambler and gunfighter, along with a tongueless black Indian named Kashtok (Jim Kelly of Enter the Dragon; he keeps being referred to as an Indian, although he looks completely black) with mysterious martial arts moves, and, for a while, Catherine Spaak as Catherine, a former New Orleans prostitute whose husband is killed by nasty outlaws before she is rescued by Pike and Tyree.  (Unaccountable accents in westerns are frequently attributed to New Orleans origins–see, for example, The Magnificent Seven [Yul Brynner] and North to Alaska [Capucine].)  There seems to be some sort of connection between Catherine and Kashtok, but we don’t know how or why. 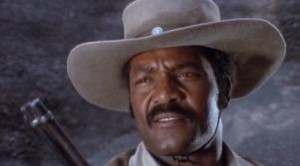 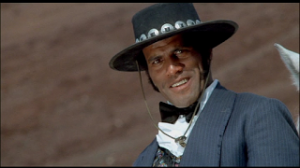 Pike, Tyree et al. are pursued by a legion of bounty hunters and robbers led (more or less) by harmonica-playing Kiefer (Lee Van Cleef).  They include Barry Sullivan as Vane, a former lawman, and Dumper (Harry Carey, Jr.), a corrupt Bible-thumper and his assistant with a gatling gun, a bunch of venal and untrustworthy robbers and a troop of conscienceless Mexican bandits.

In the end, everything is blown up, Kiefer is shot in the back by Dumper before Dumper dies, and things don’t seem all that resolved.  It does appear that Kiefer is only wounded, and the film doesn’t seem to know what to do with him at the end.  After spending the entire movie setting up some kind of confrontation between Pike and Kiefer, it doesn’t happen.  But plot is not the movie’s strong point; this film is more interested in action than in making sense.  Characters seem to be dropped in and out fairly arbitrarily.  The movie is watchable but not remarkable.  Filmed in Spain and the Canary Islands.  Jerry Goldsmith does the music.  Director Antonio Margheriti is listed as Anthony M. Dawson in the credits. 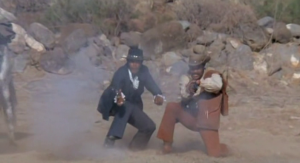 The previous year (1974) Brown, Williamson and Kelly had appeared together in Three the Hard Way, a modern-era blaxploitation action thriller.  This movie was apparently conceived as a genre-jumping follow-up project.  In the western genre, Brown and Van Cleef would reunite in 1977 for Kid Vengeance, which was also released as Take Another Hard Ride.