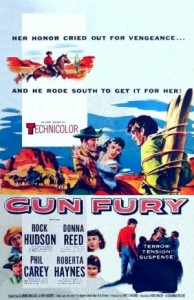 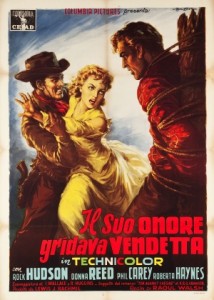 Three of the principal characters in this western from the early 1950s are still wallowing in the aftermath of the Civil War. Ben Warren (Rock Hudson in an early starring role) fought for the Union, has had more than enough killing and now wants only to marry his fiancée Jennifer Ballard (Donna Reed) and live on his large California ranch.  He doesn’t even wear a gun any more.  Jennifer is from Atlanta and is anxious to start a new life where the the desolation of Sherman’s March is not remembered.  And Frank Slayton (Phil Carey) is an embittered former Confederate, now an outlaw in the southwest.

As the film starts, Jennifer is on a stage carrying a large amount of gold and two former Southern gentlemen, along with a cavalry escort.  They stop in Haynesville, Arizona Territory, where Jennifer is meeting her future husband Ben.  He joins the stage passengers, and after it takes off Ben and Jennifer discover that the two Southerners are the noted outlaws Frank Slayton and Jess Burgess (Leo Gordon), and their new cavalry escort are Slayton’s men.  They rob the stage and think they’ve killed Warren, and Slayton abducts Jennifer, for whom he has developed a fascination. 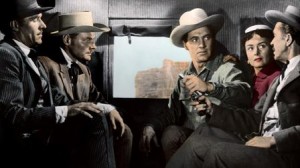 Slayton and Burgess have a falling out over the abduction, and Slayton leaves Burgess tied to a corral post for the buzzards.  Meanwhile, Warren discovers he isn’t really dead and takes one of the stagecoach horses in pursuit.  He releases Burgess, and they join forces to pursue Slayton for vengeance and to rescue Jennifer.  They are joined by an Indian Johash (Pat Hogan), whose sister was also taken by Slayton’s men in an earlier raid on Taos. 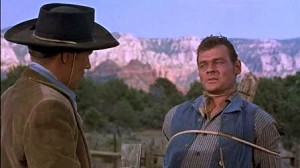 As Slayton and his men get closer to the Mexican border, Burgess and Warren find a couple of his men buying supplies in a town and kill one of them.  Now Slayton knows they are following.  He stops by a village notable for its cantina and Mexican ladies of easy virtue, where Slayton has a girl Estella Morales (Roberta Haynes).  He has Jennifer cleaned up and has his way with her, although the camera doesn’t show that very explicitly.  Estella is enraged at being abandoned so casually.  Slayton makes a deal with Warren and Burgess: he’ll trade Jennifer back to Warren in exchange for Burgess.  Although Warren isn’t minded to make that trade, not trusting Slayton in the slightest, Burgess insists he can take Slayton.  It doesn’t work, and Burgess is killed.

Now it’s Warren and Johash against Slayton and the remainder of his band of outlaws.  Estella tries to get Slayton and is killed for her pains.  It comes finally, as we knew it would, to former pacifist Warren and the ruthless outlaw Slayton.  Just when it looks like Slayton has the advantage, it turns out he has forgotten Johash, and Slayton ends with a knife in his back.  Warren and Jennifer ride off to their California ranch. 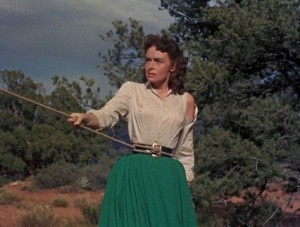 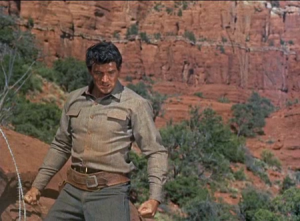 This is one of three movies from 1953 in which director Raoul Walsh used his new discovery Rock Hudson. (The Lawless Breed and Sea Devils are the other two.)  None of them are particularly memorable.  Like Hondo, this film was made in the 3-D process that was all the rage that year, and the camerawork, especially in the second half, shows the usual evidence of that in the angles of thrown objects, striking rattlesnakes and such.  Carey as the sociopathic outlaw Slayton and Leo Gordon as the vengeful Jess Burgess give the best performances in the cast.  Leo Gordon was just breaking into movies, the same year that he played Ed Lowe (Geraldine Page’s despicable husband, shot by John Wayne) in Hondo.

Donna Reed is beautiful but nothing special as Jennifer (she’s more notable in Hangman’s Knot and Backlash later in the decade, for example), and Rock Hudson was never a dazzling actor, but he was more wooden here than he would be later in his career.  Lee Marvin and Neville Brand have early roles as members of Slayton’s gang, but they have neither enough lines nor enough camera time to distinguish themselves here.  Roberta Haynes is modestly interesting in a limited role as Mexican spitfire Estella, but one does feel that actual Mexican Katy Jurado could have done it better, and that the smoldering Linda Darnell did do it better in My Darling Clementine. 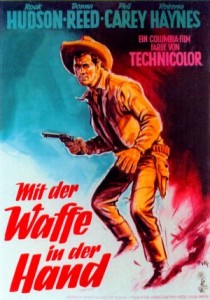 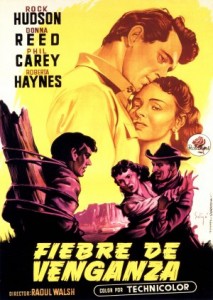 The script by Irving Wallace and Roy Huggins is fine, based on Kathleen George’s novel Ten Against Caesar.  Warren has interesting exchanges with lawmen and townsfolk of the small towns he and Burgess go through in their pursuit, as he tries without success to get some help.  The title of the movie doesn’t mean anything in particular, which was common enough with westerns of that era.  One does expect better camera work from the experienced director Walsh; camera placement and angles here often telegraph what’s coming.  The one-eyed Walsh could not himself see the 3-D results of his work, but he had done better westerns—Colorado Territory, for example.  Shot on location in Sedona, Arizona.  83 minutes.