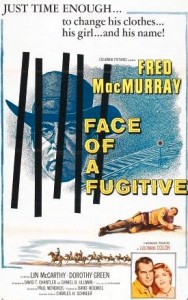 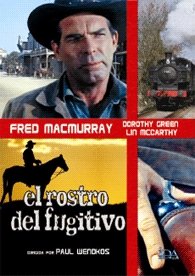 In the 1950s Fred MacMurray was in a series of low-profile westerns that tended to be in part meditations on community and in part a consideration of whether a bad man can walk away from his past.  They included At Gunpoint, Quantez, Good Day for a Hanging, The Moonlighter, and this one.  Partly they work because MacMurray could project the kind of decency he did later as the father Steve Douglas in the television show My Three Sons in the 1960s.  Partly they work because he’s also good at portraying somebody on the edge, who could go either way.  His greatest movie role was as Walter Neff, the insurance investigator who gets pulled to the dark side by his fascination for bad woman Barbara Stanwyck in Double Indemnity (1944), one of the best films noir ever made.  We know how that one ended up, so we’re always aware that he could go that way again.

As in The Moonlighter and Quantez, here he’s a man with a past.  Jim Larsen (MacMurray) is a bank robber in the custody of a deputy marshal on a train, being taken to prison.  He overpowers the deputy and gets away, just as his younger brother Danny (Ron Hayes) arrives with horses to give him help he doesn’t need or want.  The deputy pulls a hidden gun and shoots Danny; Danny shoots back and kills the deputy, putting Larsen in bigger trouble than he was in before.  Larsen and his wounded brother get on the rear car of a train and try to sort out their situation. 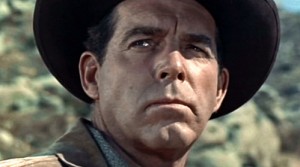 They have a patchy family history, with a father who looked out for himself and a mother who wore herself out and died young.  Larsen left home when she died and harbors continuing resentment against his father.  As he tries to figure a way out, Danny dies and Larsen stuffs his body in a mail bag and tosses it off a bridge into a river.  At a railroad switchyard, he pretends to be Ray Kincaid, mine inspector, and eludes capture until he arrives at the town of Tangle Blue.  (This picturesque name is the name of a lake in northern California’s Trinity Alps, but there’s no overt connection with this location in the movie.)

His seatmate is six-year-old Alice, who lives in Tangle Blue, where her mother Ellen Bailey (Dorothy Green) is a widow and her uncle Mark Riley (Lin McCarthy) is the new sheriff.  The plot takes its time developing, as Ray makes the acquaintance of Ellen and witnesses a confrontation between the young sheriff and Reed Williams (Alan Baxter), a large rancher who wants to fence off public land.  Ray can’t leave town because the passes have been shut down while the search is on for Jim Larsen.  So he applies to Mark for a job as a deputy.

At the dance in Tangle Blue that night, the answer on the job is no.  But Williams shows up with several of his men, including Purdy, to threaten Riley.  Ray steps in to back Williams off, and Riley gives him the deputy job.  As they talk about the nature of responsibility, law and family life, Ray talks Riley into marrying his long-time girlfriend, even with the uncertainties of his life as sheriff. 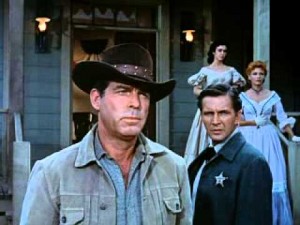 Helping the sheriff face down the bad guys.

As Ray takes Ellen home from the dance, they see that the body of a young man has been found in a local stream, stuffed into a mail bag.  (Of course, we knew it would show up.)  Ray and Ellen seem to have a relationship developing, but he still has to get out of there.  In town, Williams’ men jump him in a bar.  He beats Williams, but Williams’ men pound him.  (Reminiscent of Robert Ryan’s fight against the outlaws in Day of the Outlaw, the same year as this film.)

Early the next morning Ray and Riley are guarding the pass out of town.  Ray tries to talk Riley into either backing off with Williams, or as an alternative, taking it to him hard.  Riley, who is about to become a lawyer, is stubborn in rejecting both of these, and heads off to cut down Williams’ fence, which will precipitate some form of showdown.  Purdy draws on Riley when he moves to cut the fence, but Ray is in the rocks above and displays extraordinary marksmanship with a rifle, hitting Purdy’s gun and cutting the three strands of wire with shots.  Riley leaves to get the wanted flyers from the train that will show Larsen’s likeness on them, and Ray starts to cut Purdy loose from his entangling wire when Williams’ men ride up.  Ray gets away to a small ghost town; he’s badly outnumbered but he starts to get Williams’ men one by one.  However, as he runs across a rotted roof, he falls through and breaks a leg.  As he drags himself into another room of the building, Purdy follows and Williams comes into the abandoned building through the front door.  It’s dim, and Williams shoots Purdy by mistake.  Riley, Ellen and deputies arrive, and it’s not clear whether Ray gets Williams or Riley does, but Ray has wounds in addition to his broken leg and is past caring for the moment. 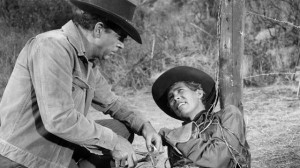 In the 1950s, of course, outlaws in westerns weren’t allowed to get away with their crimes as they might be now.  (See the end of The Moonlighter, for example.)  There’s still the dead deputy to account for, even with Ray’s subsequent heroism in Tangle Blue.  It makes for an equivocal and mildly unsatisfying ending.

MacMurray and Coburn (showing up here after his introductory role in Ride Lonesome) are very good, and Dorothy Green is good enough.  Ron Hayes is good in a brief role as Danny Larsen before he dies.  The rest of the cast isn’t as strong, particularly Lin McCarthy as the stubborn sheriff Mark Riley and Alan Baxter as the principal bad guy.  Both these roles could have used more nuance in their development, but the movie’s budget probably wasn’t big enough to get better actors for these roles.  MacMurray is really the only significant name in the cast.  By now he is not thought of as a star in westerns, but he was in several good ones in the 1950s.  This and Quantez are probably the two best, but they’re all worth watching.  This was MacMurray’s last western.

In general, the writing is good but not flashy, as Ray develops relationships in town.  As he is treated decently, he responds the same way and is better than he has to be, convincingly.  The pacing is good as the plot and relationships develop, heading toward the inevitable conflict with Williams.  Director Paul Wendkos spent most of his career in television, but he also made one of the Magnificent Seven sequels (Guns of the Magnificent Seven) and three Gidget movies.  Music is by Jerry Goldsmith.  In color, at 85 minutes.

For a similar good story of a man with a past riding into town under a false identity and helping out a beleagured sheriff against considerable odds, see Richard Egan in Tension at Table Rock (1956).