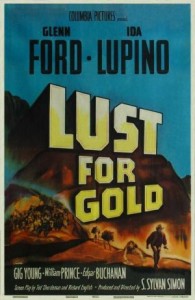 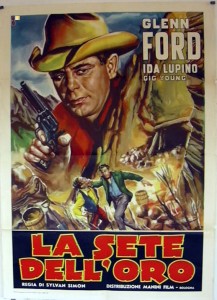 This mystery-noir western is a retelling of the story of the Lost Dutchman Mine on Superstition Mountain in Arizona.  It has a modern (ca. 1949) framing story with the supposed grandson of the Dutchman, and the historical portion of the film, which takes place in 1886 and 1887, features a sordid romantic triangle and several murders.  The movie starts with a certification from the governor of Arizona that the events of the film are true “according to the histories and legends of Arizona.”  This is about as truthful as most such movie declarations are.

In modern times, Barry Storm (William Prince), the grandson of German-born Jacob Walz, is hiking on Superstition Mountain when he hears a gunshot and finds the body of adventurer Floyd Buckley (Hayden Rorke), shot with a hunting rifle.  He reports this to the Sheriff Lynn Early (Paul Ford) in Florence, Arizona, and leads an expedition to retrieve the body.  Revealing himself to be the grandson of Walz (the Dutchman after whom the mine is named), deputies Ray Covin (Will Geer) and Walter (Jay Silverheels), an Apache, go back to the site with him and tell him the history of the mine and show him a couple of the landmarks associated with it.  Storm goes off to a retirement home in Phoenix, looking for more of the story. 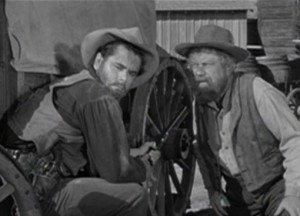 Walz (Glenn Ford) and Wiser (Edgar Buchanan) follow the last of the Peraltas to the lost mine.

Long known by Apaches, the fabulous mine was rediscovered by the three Mexican Peralta brothers around 1850.  Manuel Peralta and his miners are killed by Apaches led by Cochise, however.  More than thirty years later, Ramon Peralta returns to Superstition Mountain (about 40 miles from Phoenix) with an American partner (Arthur Hunnicutt), who can file on the claim.  They are followed by Wiser (Edgar Buchanan) and his friend Jacob Walz (Glenn Ford), who trail them to the mine.  Once there, they kill Ramon and his partner and Walz kills Wiser, leaving the three bodies in a ravine. 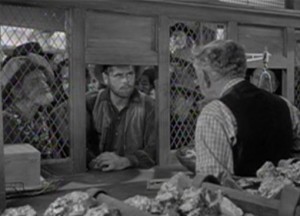 Walz cashes in the first of his gold.

[Spoilers follow.]  Walz takes his initial load of gold back to Phoenix, where gold fever builds.  Among those affected is Julia Thomas (Ida Lupino), who tells her ineffective husband Pete (Gig Young) to disappear while she gets to know Walz.  She’s successful, and Walz is infatuated with her, while Pete becomes a local laughingstock.  Walz makes five trips to the mine, returning each time to Julia.  After the fifth trip he sees Julia and Pete together and realizes he’s being played.  He gives Julia a map back to the mine, and Pete and Julia arrive there before him.  Walz takes their mules and supplies and traps them at the mine without water.  Finally Pete runs out of bullets and Julia tries to go to Walz.  Pete stops her, and she stabs him in the back (literally, with a knife).  As Julia climbs toward Walz, there’s an earthquake and she’s crushed by rocks;  Walz is also killed and the entrance to the mine buried. 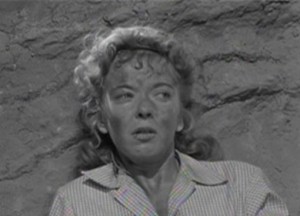 Julia Thomas (Ida Lupino) is trapped at the mine.

Storm now thinks he can find the mine, and he heads back to the mountain.  However, there is still Buckley’s killer, who has apparently killed a total of four men over two years.  The killer also finds Storm, and they fight.  It is deputy Ray Covin, who is larger than Storm.  During their lengthy fight, it appears that Ray is winning until he is bitten by a rattlesnake and falls over a cliff.  It develops that Lynn Early had his suspicions about Ray but could not prove them until he could use Storm as bait.  Storm still hasn’t found the mine, though.

The structure of the movie is a bit complicated, with its multiple flashbacks, but it works if you’re paying attention.  This film has a large cast of good actors and a very noir feel, with few admirable characters.  British-born Ida Lupino is particularly effective as the faithless Julia Thomas, and Glenn Ford is appropriately moody as a Walz who is alternately sympathetic and murderous.  Ford’s German accent is slippery.  The weakest link in the cast is William Prince as Barry Storm; but he’s not terrible and spends most of his time narrating.  This was based on Thunder God’s Gold, a 1945 book by the real Barry Storm that renewed interest in the Lost Dutchman Mine, but there are many versions of the story.   The real Jacob Walz supposedly died of pneumonia in 1891 after flooding on his Arizona ranch.  Author Storm was not in fact a grandson of Walz, and sued the studio.

There are some painted backgrounds and obvious studio shots, and the earthquake sequence does not look particularly real.  But the movie is nevertheless quite watchable.  This was director S. Sylvan Simon’s last film; he died a short time later of a heart attack at 41.  Shot on location in Arizona, in black and white by Archie Stout; 90 minutes in length.