What’s so revisionist about revisionist westerns?  They started out in the late 1960s, partly as a reaction to all the westerns and western traditions that had come before them, and partly in connection with the anti-authoritarian, anti-military and anti-traditional sentiments of the baby boomers as they came of age in the era of the Vietnam War.  Whatever the traditional way of looking at the West and its development had been, the new generation wanted to look at it differently.  There was a strong streak of nihilism in them, suggesting that there was no real meaning in traditional western tales.  The heyday of revisionist westerns was the 1970s, with a new style of cinema taking over generally at the theaters.  Most revisionist westerns haven’t aged well, but as a group they remain interesting cultural artifacts of their era.

As a reaction against traditional themes, some of them wanted to emphasize, in a back-to-nature sort of way, the nobility of the Indians and their mistreatment by whites (see Little Big Man, for example).  Others, in a reaction to the John Ford school of looking at the military patriotically, wanted to show the cavalry as similar to the tainted US military in Vietnam (Soldier Blue).  Some wanted to show that traditional institutions are inherently corrupt (There Was a Crooked Man, Posse).  And some just wanted to do away with any sense of nobility or purpose connected to the western expansion of the United States.  Some did that by undermining traditional western heroes, like Wyatt Earp (Doc).  They tended to have R ratings because they showed the gritty West “the way it really was”–the down and dirty way they imagined it to have been.

“Put simply, the revisionist Western steers away from, or plays against, formula, refusing to romanticize the Old West or depict it as a place with clear good guys and bad guys. It also tends to emphasize the grimier, more unpleasant aspects of life in the American West. One litmus test: If you see flies buzzing around a corpse, you’re probably watching a revisionist Western.”  (Vulture.com) 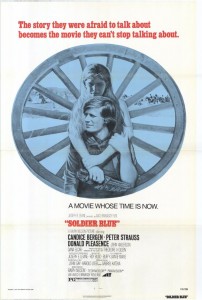 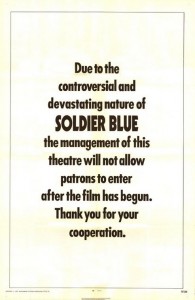 These are not great movies generally, like most films that have an ideological or cultural ax to grind.  But you should see some of them if you’re a fan of westerns.  The best of the genuinely revisionist westerns is probably Ulzana’s Raid, although many place McCabe and Mrs. Miller on the list of great westerns.  Little Big Man is interesting for Dustin Hoffman’s performance and its depiction of the Cheyennes.  Clint Eastwood’s magnum opus Unforgiven is not of the 1970s and is in a category of its own.  But it is revisionist in stripping away any supposed nobility from the image of western lawmen and killers, even while it tells a gripping story.

Even while the revisionist westerns were in vogue, traditional westerns tended to be bigger hits when they were good.  The 1970s also saw John Wayne in The Cowboys and The Shootist, and Clint Eastwood in The Outlaw Josey Wales.  They were great westerns, and not remotely revisionist.  The western story retained its power and popularity when it was done well. 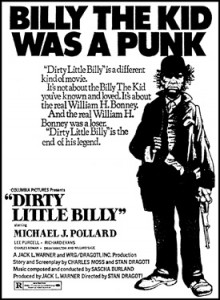 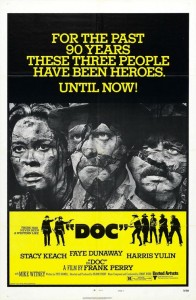 Little Big Man (1970).  Based on a novel by Thomas Berger, this is successful, if not completely accurate, in its depiction of the Cheyennes.  It is less so in its trashing of a succession of venal white characters, including Custer.

Soldier Blue (1970).  Portraying the Sand Creek Massacre of 1864 as a counterpart of the American military action in Vietnam.  As a cavalry movie, it’s less successful than Duel at Diablo by the same director, Ralph Nelson.

There Was a Crooked Man (1970).  Kirk Douglas, in his anti-authoritarian mode, spends most of the movie jousting with the authorities inside and out of a prison.  Everybody’s corrupt.

Lawman (1971).  Directed by Englishman Michael Winner, this has some good performances (Burt Lancaster, Robert Ryan), but is not very successful in making the law seem inherently corrupt.

Doc (1971).  Doc Holliday and Wyatt Earp get the revisionist treatment in this little-seen version of the story of the gunfight in Tombstone.

McCabe & Mrs. Miller (1971).  Warren Beatty is the gambling anti-hero, and Julie Christie a prostitute without the proverbial heart of gold in Robert Altman’s famous western.

Ulzana’s Raid (1972).  This remains respectable because it is even-handed in its depiction of both Indians and cavalry tending to savagery in the Apache wars.  Burt Lancaster is excellent as the old scout trying to teach a young eastern lieutenant about guerilla warfare in the West.

Dirty Little Billy (1972).  Michael J. Pollard is Billy the Kid, the dirty little Billy of the title.  While the title may be correct in its description of Billy, it is not terribly watchable or historically accurate.

The Culpepper Cattle Co. (1972) This is a coming-of-age story, with Gary Grimes as the young man in question on a cattle drive with dirty, smelly cowboys.  He learns some undesirable things, as many cowboys probably did. 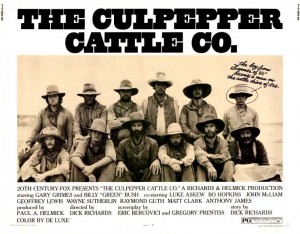 The Great Northfield Minnesota Raid (1972).  Robert Duvall as Jesse James and Cliff Robertson as Cole Younger head the cast of this highly fictionalized account of the James Gang’s 1876 disaster.

Bad Company (1972).  Jeff Bridges as a young man falls in with companions aptly described by the title

The Life and Times of Judge Roy Bean (1972).  The titular “Law West of the Pecos” is played by Paul Newman in this John Huston-directed biopic.  (Compare Newman’s performance with Walter Brennan in 1940’s The Westerner or Ned Beatty as an even more highly fictionalized Bean in 1995’s Streets of Laredo.)

The Spikes Gang (1974).  Another coming-of-age story with Gary Grimes, this one with Ron Howard and Charles Martin Smith, too.  They get tutored in bank-robbing by Lee Marvin, who turns on them.  Everybody dies.

Posse (1975).  Kirk Douglas is a marshal with a permanent posse and political ambitions, who spends the movie chasing outlaw Bruce Dern.  Dern then demonstrates the futility of it all.

The Missouri Breaks (1976).  Arthur Penn’s pro-rustler look at Montana ranching conflicts, with Jack Nicholson as the primary rustler and a wildly quirky Marlon Brando as a frontier hit man (or “regulator”) in the only movie in which they appear together.

Unforgiven (1992).  Neither the lawman (Gene Hackman) nor the gunman (Clint Eastwood) is admirable in this bleak story.  But Clint Eastwood does tell a compelling tale.  If this is revisionist, it’s the most completely successful of the revisionist westerns.

Wild Bill (1995). Excellent westerns director Walter Hill makes a fictional hash of a framing story of Wild Bill Hickok’s last days in Deadwood, while telling other elements of his story in flashbacks and opium dreams.  Jeff Bridges as Wild Bill is excellent, but the movie is not.

Dead Man (1995).  Jim Jarmusch’s surrealistic portrayal of a journey toward death in the West isn’t reacting against traditional westerns, so much as starting over with a blank slate.

Slow West (2015).  Michael Fassbender stars as a bounty hunter chaperoning a young Scot seeking his love in a coming-of-age and coming-of-death story with a slightly European sensibility.