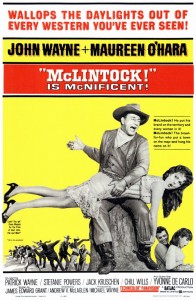 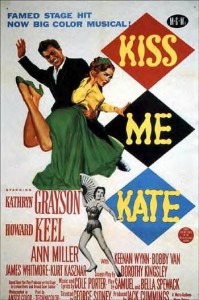 Variations on a theme of The Taming of the Shrew.

Many find this John Wayne-Maureen O’Hara western comedy enjoyable; others claim it has no plot and is just a string of situations that worked in previous Wayne movies (Rio Grande, North to Alaska) put together without a real story keeping them together.  With all the familiar actors in familiar roles, it does feel like we’ve seen much of it before.  The exclamation point in the title is not a good sign, either.

George Washington McLintock (known to most of his neighbors, friendly or not, as GW or just McLintock) is a local land and cattle baron in an unspecified territory out west near the turn of the 20th century.  That makes it either Arizona, New Mexico or Oklahoma, which were the only territories left then, and there are references to the Mesa Verde and Comanches.  GW’s wife Katherine (Maureen O’Hara) hasn’t been living with him for some time (years, in fact), and he is given to drunken roistering.  When he comes home to his ranch from that, he tosses his large hat at the house’s third-story weathervane and it generally lights there.  Whichever of the Mexican boys gets to it the next morning can have it.  By the end of the movie, he’s made 310 tosses in a row without a miss.

Things are happening in the town of McLintock.  Homesteaders are arriving to settle the Mesa Verde, the local Comanches on the reservation are restless, the Comanche chiefs are coming home from exile, GW’s daughter Becky (Stephanie Powers) is coming home from school in the east, and various anti-McLintock forces (developers, the territorial governor, bureaucrats) are making things more difficult. Early in the movie GW hires young Devlin Warren (Patrick Wayne), son of a recently-deceased homesteader, as a hand on the ranch and his mother Louise (Yvonne De Carlo) as the ranch cook. 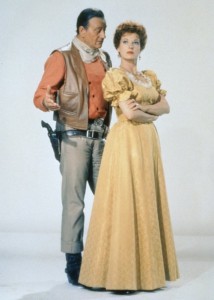 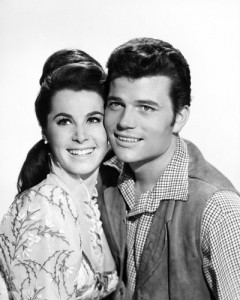 Stills of the estranged couple (John Wayne and Maureen O’Hara) and the young lovers (Stefanie Powers and Patrick Wayne).

During the remainder of the movie, taking place around the town’s traditional July Fourth festivities, GW argues on behalf of the Comanches before a commission headed by the territorial governor; participates in a rollicking fight at a local mudhole involving homesteaders, ranchers and an unfortunate Indian agent (Strother Martin); watches his daughter flirt with the clearly unfit son (Jerry Van Dyke) of someone he has long despised while it become obvious that Becky and Devlin should be together; and tries unsuccessfully to get back together with his estranged wife Kate. 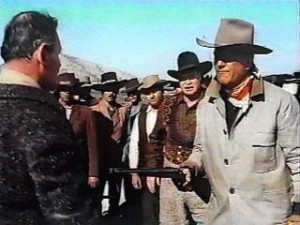 “Somebody oughta belt you in the mouth.”

GW McLintock:  [Yelling at homesteader played by Leo Gordon.]  “You’ve caused a lot of trouble this morning.  Might have got somebody killed.  Somebody oughta belt you in the mouth, but I won’t… I won’t.  [Reconsiders]  The hell I won’t!”  [Knocks the man down a muddy hill, precipitating a free-for-all.]

By the end, Louise Warren resigns to marry the local sheriff, Becky and Devlin are engaged and, in a taming-of-the-shrew fashion, GW and Kate are reconciled.  Even the Comanches may get a fairer shake from the government, although that is not established.  There are way too many characters and too many situations, leading to a lot of loose ends.  If you enjoyed all the action and supposed good humor without inspecting it too closely, you had a good time. 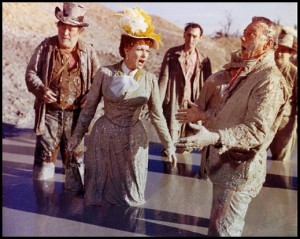 Director Andrew McLaglen was the son of Irish actor Victor McLaglen, long a friend of John Wayne’s mentor John Ford and of Wayne himself.   Andrew had gotten into the industry through directing television, especially episodes of Have Gun Will Travel.  With his comparative youth and inexperience, he was cheaper than Wayne’s first choice, Henry Hathaway, who had directed North to Alaska three years earlier.  There are evidences of his television background in the rollicking music, played very obviously to signal that the fight or whatever else is happening is not serious.  It’s a little heavy-handed.  The screenplay was written by James Edward Grant, another Wayne favorite, who also wrote and directed Angel and the Badman and had written The Alamo, Wayne’s big-budget production from three years earlier.

Of the large and rambunctious cast, Yvonne De Carlo and Jack Kruschen are particularly good as the new cook Louise Warren and Jake Birnbaum, the local Jewish merchant who is a long-time friend of GW.  Stefanie Powers and Patrick Wayne are fine as the young lovers, but Jerry Van Dyke plays Junior much too broadly for him to be considered a seriously competing suitor.  Chill Wills as GW’s majordomo Drago is less irritating here than he is in The Alamo, for example. 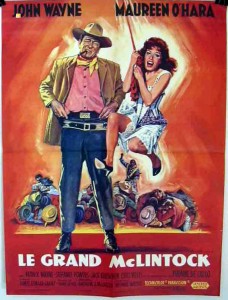 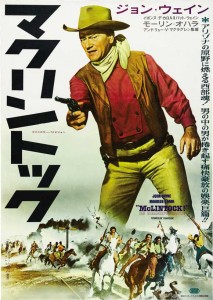 If you enjoyed North to Alaska, you’ll probably want to watch this as well.  But you may have a hard time remembering the plot afterward.  More likely you’ll remember it as a series of vignettes, like the mud fight or the two spanking-with-a-coal-shovel episodes.  It’s like an extended television sitcom.  That spanking probably won’t play well with modern feminists, either.  This was the fourth of five films in which Wayne and O’Hara starred together, and the estranged married partners shtick was wearing a little thin without real issues.

In color, 127 minutes.  The lively theme song “Love in the Country” is sung by the folk trio The Limeliters. 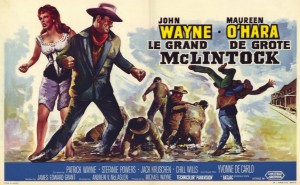