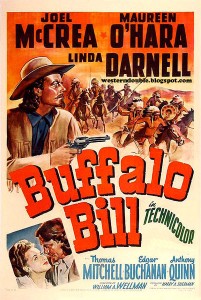 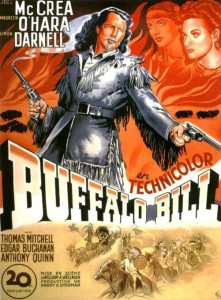 Director William Wellman directed some very good westerns, such as The Ox-Bow Incident, Yellow Sky and Westward the Women, but this isn’t one of his very best.  It has an interesting cast, but the story suffers from lack of a strong and cohesive story arc, as is often the case with biopics.   And, as with many historically-based movies in the 1940s, it takes numerous liberties with the real history involved.

The movie starts in 1877, with young Bill Cody (Joel McCrea) hunting buffaloes and rescuing a wagon of dignitaries and Sgt. Chips McGraw (Edgar Buchanan in heavy makeup, playing much older than he really was) from attacking Cheyennes with his excellent shooting.  Among those rescued are Senator Frederici (Moroni Olson) and his nubile daughter Louisa (Maureen O’Hara), with whom Cody is immediately taken, and writer Ned Buntline (Thomas Mitchell).  Cody is sympathetic to the Cheyennes and has friends among them, including chief’s son Yellow Hand (Anthony Quinn) and school teacher Dawn Starlight (Linda Darnell in a strange role). 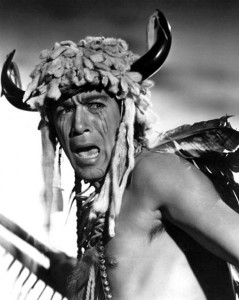 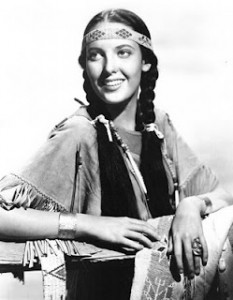 When railroad interests try to force the Cheyennes off part of their land, Dawn Starlight tells Yellow Hand to take the senator as a hostage.  Cody rescues him, but the Cheyennes forge an alliance with the Sioux for a new war.  Cody and Louisa marry, and Cody scouts for the Fifth Cavalry against the Cheyennes (and against Louisa’s objections).  The advance scouts for the cavalry and the Cheyennes meet at War Bonnet Gorge, and in order to give the rest of the column time to come up for support, Cody takes on his blood brother Yellow Hand in single combat.  Cody wins, and Dawn Starlight is killed in the resulting battle as well.

Cody scouts for the Russian Grand Duke Alexis on a buffalo hunt, taking Louisa along.  Louisa tells him she’s pregnant, and they head for home.  The baby arrives before they get there, and Louisa bears a son named for Kit Carson with the help of an aged Cheyenne woman.  However, she won’t stay out west and takes their son to Ohio, where he can have the benefits of civilization and be kept safe. 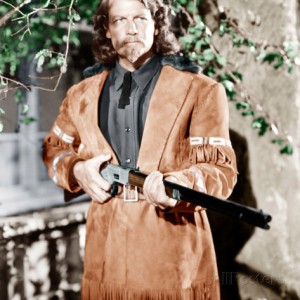 Cody goes to Washington, D.C. with Buntline to receive the Congressional Medal of Honor for War Bonnet Gorge, only to receive word that Kit is dying of diptheria in Ohio.  He arrives just after Kit’s death, and leaves again.  In his bitterness, he takes on the venal railroad interests, and in turn is vilified with his role in the recent war questioned.  Alone and penniless in New York, he takes a job in a sideshow as a sharpshooter; Louisa shows up and demonstrates her faith in his marksmanship.  And Buntline conceives the idea for a Wild West show, giving rise to a montage in which Cody’s show performs before European monarchs and Cody ages decades in a few minutes, before riding off into a figurative Technicolor sunset with Louisa.

Joel McCrea looks very good in long hair and goatee as Bill Cody, although he does not seem as outgoing and flamboyant as the real showman Cody was.  Even as a lowly scout and buffalo hunter in 1877, we are to believe that Cody wore outrageous pants.  Some of his actions with Indians, such as greeting them with “How!”, are jarring now, but were maybe less so when this was made.  He is depicted as having strong sympathies with the Indians and speaks up for them, although he always fights with the cavalry.

Red-haired Maureen O’Hara is appropriately fiery as Louisa Frederici Cody, although she seems inherently unreasonable in some of her attitudes.  Thomas Mitchell as Ned Buntline is much the same as he was as Doc Boone (in Stagecoach), as Plato Beck (Silver River) or a number of other heavy-drinking, classically-educated populist characters he played in westerns over the years. Anthony Quinn is good as Yellow Hand, but he stands out against other actors who are more clearly Indians.  Linda Darnell is a curious and unnecessary (but beautiful) character, an Indian school teacher in supposedly traditional Cheyenne dress—a carrier of civilization who has not herself fully partaken of various of its benefits. 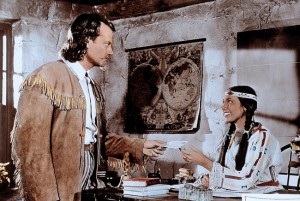 The supposed chronology of the movie doesn’t work well.   Although the movie is said to start in 1877 and a year or two passes before we hear of Crook’s defeat (actually more of a draw) at the Rosebud and Custer’s defeat on the Little Big Horn, those battles took place in 1876.  Cody did take on and kill Yellow Hand, but their relationship is exaggerated here.  Louisa Frederici’s father was not a senator, and they were married in the mid-1860s, not the late 1870s.  The Codys’ separation did take place, but they were estranged for most of their married life and never really got back together.  Cody started his first theatrical endeavors without Buntline in 1872, well before 1877, and briefly came back to the frontier after Custer’s defeat.  His manager/partner in the Wild West show was Nate Salisbury, not Ned Buntline.  He did have financial ups and downs with his shows, and he did love children as the movie shows.  At the turn of the 20th century, he may well have been the most recognizable celebrity on earth.  William Tecumseh Sherman is here claimed to have made the comment that the only good Indian is a dead Indian, but another general, Philip Sheridan, was supposedly the originator of that famous phrase.  As you might guess, there are other contenders for that honor, as well. 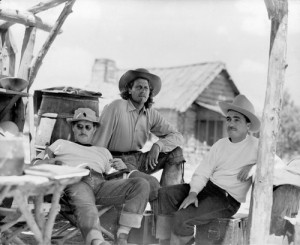 Cody’s Medal of Honor was awarded in 1872, for service as a civilian scout to the 3rd Cavalry, displaying “gallantry in action” at Loupe Forke, Platte River, Nebraska, not for Warbonnet Gorge.  After Cody’s death in 1917, Congress revised the standards for receiving the Medal and removed from the rolls 911 given to civilians and others that would not be awarded by the new standards.  Among those removed was Cody’s.

This was a large-budget production in its time, with an excellent cast.  As a whole, elements of the film don’t work all that well; the weakness is largely in the structure and story.  Shot in color at various locations in Arizona, Utah and Montana, at 90 minutes.  For another interesting view of the Cody marriage (with a young Anthony Quinn as another Cheyenne warrior), see Cecil B. DeMille’s The Plainsman (1936).  In They Died With Their Boots On (1941), Anthony Quinn was Crazy Horse and got to kill Custer and make off with the 7th Cavalry’s banner.  For a revisionist look at Cody as a showman and the supposed history of the West, see Robert Altman’s Buffalo Bill and the Indians, or Sitting Bull’s History Lesson (1976), with Paul Newman as Buffalo Bill. 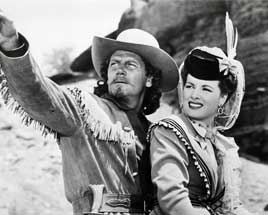 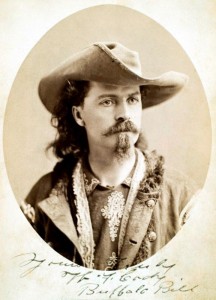 As an historical artifact, the real Cody made a film with footage of from his show in 1908 near the end of his career.  Four minutes of the footage can be seen at http://moviessilently.com/2013/10/19/silent-movie-time-capsule-105-years-ago-buffalo-bill-cody-appeared-in-a-movie/