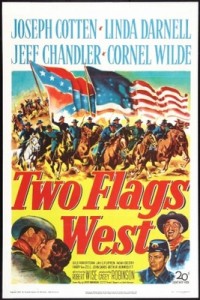 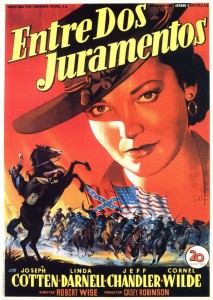 This is a large-budget cavalry western with a good cast and a generic title.  The two flags referred to are north and south during the Civil War, as Col. Clay Tucker’s Confederate cavalrymen (they rode with Jeb Stuart) are recruited by Capt. Mark Bradford (Cornel Wilde) from a prison camp in Rockford, Illinois, to fight Indians out west as galvanized Yankees in autumn 1864. 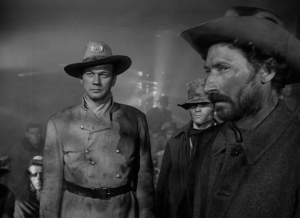 Col. Tucker (Joseph Cotten) and his men, in a Union prison in Rockford, Ill., are recruited to fight Indians.

They are headed for Fort Thorn in New Mexico Territory, to serve under Major Henry Kenniston (Jeff Chandler, the same year he played Cochise in Broken Arrow).  The ambitious Kenniston escaped from the famous Libby Prison in Richmond, and, in escaping, ruined his right leg so that he has been assigned out west instead of to duty in the main war.  His brother was killed at Chancellorsville, and he consequently hates Confederates.  The brother’s widow Elena Kenniston (Linda Darnell), a Spanish beauty returning home to Monterey, California, is temporarily staying with her brother-in-law at the post while she waits for a wagon train to California.  She becomes the center of romantic interest for the major, Capt. Bradford and even now-Lt. Tucker (Joseph Cotten). She seems to favor Bradford, and Tucker has other things on his mind dealing with all the conflicting loyalties, plots and counter-plots in this frontier post.

The primary source of tension in the film is whether the former Confederates will desert to Texas as soon as they get a chance, and it seems they will.  Major Kenniston assigns the southerners to carry out the execution of two men convicted of selling guns and booze to the Indians, only for the ex-Confederates to discover after the two are dead that they were southern agents.  There are more southern agents, one of whom convinces Tucker to return to Fort Thorn until a later time when he can help carry out a larger plot.  After duty escorting a wagon train part of the way to California, Tucker brings back Mrs. Kenniston, who was escaping her brother-in-law’s domination, so that the major will trust the southerners.

[Spoilers follow.]  Finally, Tucker gets the signal to leave and does so with his men.  However, the angry, wrong-headed major (who refers to the Indians as rebels, so we know who he’s really thinking about) needlessly antagonizes the Kiowas by angrily and gratuitously killing Kiowa chief Satank’s son.  Given a choice by circumstances, Tucker and his men, instead of heading for Texas, return to the aid of the fort.  Beseiged by 1500 Indians, things look grim for the remaining troopers. 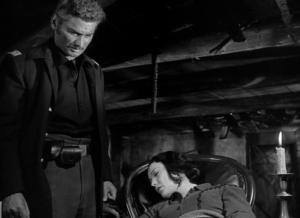 Major Kenniston (Jeff Chandler) decides to sacrifice himself for the greater good.

After one day of fighting, Bradford and many others are killed, and things look even more hopeless.  With the stockade in flames, Kenniston decides to give himself up to the overwhelming Indian force to save what’s left of the fort and its defenders, and Tucker is left in command.  It appears that Tucker and Elena may make a new life together, although things are left ambiguous between them as they learn that Sherman has split the south and the end of the war is imminent.

Director Robert Wise didn’t make many westerns (Blood on the Moon, Tribute to a Bad Man); he was more known for such large-budget productions as The Sound of Music, West Side Story, The Sand Pebbles and the first Star Trek movie.  However, there are signs here of movie-making intelligence at work.  Some of the shots are reminiscent of John Ford:  see the southern soldiers racing back to the fort, for example, with a low camera angle that captures them along a ridge against a luminescent black-and-white sky.  Later, as Major Kenniston marches (with a limp) out of the stockade gates to his certain doom, he is shot from behind with a low camera angle, making it look as though he is walking upward, although we’ve already seen that the gate is on level ground. 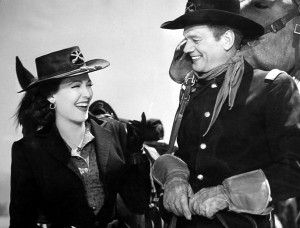 Linda Darnell and Joseph Cotten engage in some badinage between scenes.

Cotten and Darnell were at the peak of their careers, and Wilde and Chandler were first-rank movie stars at the time as well.  Darnell was allergic to horses, was not happy about her role in this western and reportedly didn’t get along well with either Wilde or Cotten, but she looks lovely and is fine in a better-than-average-female-in-a-western role.  She also wears one of the better hats seen on a woman in a western.  (Compare it, for example, with Donna Reed’s ineffective hat in Backlash.)  With her dark good looks, she was often cast as an Indian (Buffalo Bill) or Hispanic (The Mark of Zorro, My Darling Clementine) beauty.

This is Cotten’s best role in a western; he generally seems a modern, urban actor, and he didn’t make many westerns (Duel in the Sun, The Last Sunset and a few others).  Although he was born into a southern family in Virginia, his Georgia accent here is elusive and sporadic.  The supporting actors (Hunnicutt, Beery, Flippen) are excellent, too, particularly the horse-faced Arthur Hunnicutt as the Confederate Sgt. Pickens.  This is a good cavalry western, but not much seen these days.  Filmed on location in New Mexico in black and white, at 92 minutes. 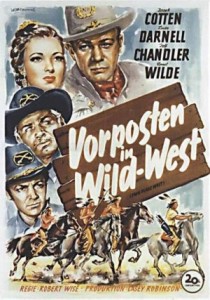 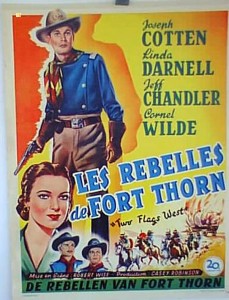 For other cavalry westerns featuring Yankees and Confederates fighting Indians together, see Escape from Fort Bravo (1953) and Major Dundee (1965).  For Chandler in another role as a not-so-admirable commander, catch him in 1959’s The Jayhawkers!