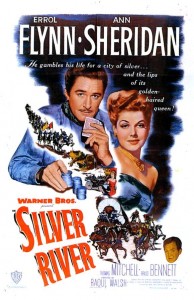 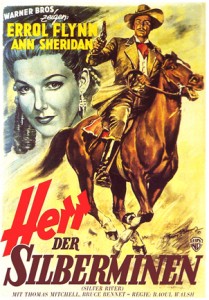 This is one of Errol Flynn’s lesser-known westerns, the sixth of eight that he made.  He and director Raoul Walsh had worked together before on They Died With Their Boots On in 1941 and couple of World War II pictures (Objective Burma and Northern Pursuit) before San Antonio (on which Walsh was uncredited) in 1945.  Instead of Olivia de Havilland or Alexis Smith, Flynn is here paired with Ann Sheridan.  They had actually worked together before, starting with 1939’s Dodge City, but Sheridan’s role there was quite small.  Here she’s the leading lady.

Capt. Mike McComb (Errol Flynn) is part of the Union guard on a pay wagon at Gettysburg during the Civil War.  Ordered to stay put, he is attacked by Jeb Stuart’s cavalry and flees.  When it looks like he’ll be captured, he torches a million dollars in paper money to keep it out of Confederate hands.  He is cashiered for his pains, so he and his junior partner Pistol Porter (Tom D’Andrea) head west, gambling on a river boat (presumably up the Missouri River).  Here, determined to be more ruthless, he runs afoul of Banjo Sweeney (Barton MacLane) and meets Mrs. Georgia Moore (Ann Sheridan), who’s hauling mining equipment to the silver mine she runs with her husband Stanley (Bruce Bennett). 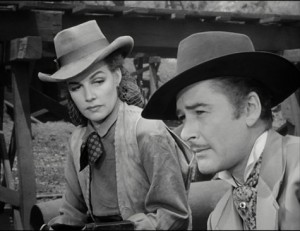 Disembarking from the riverboat, McComb finds that all the freighting capacity has been taken over by the acerbic Mrs. Moore.  Meeting the freighter Sam Slade, McComb wins Slade’s wagons, horses and mules at poker, so his gambling equipment and not the Moores’ mining equipment gets hauled to Silver City.  (There was an actual Silver City in Idaho and one in Nevada, but this one appears to be a fictional town in Nevada.)  Then McComb sells the freighting equipment to Stanley Moore for 6000 shares in his mining company, to the chagrin of Moore’s wife.  McComb also meets alcoholic lawyer Plato Beck (Thomas Mitchell, in one of his patented drunken, classically-educated westerner roles).  When McComb refuses to let the miners gamble in his establishment with mining company scrip, he starts a bank and negotiates a percentage of the silver mines with the mining owners who now need more cash on hand.

The silver empires, McComb’s and everyone else’s, grow ever larger.  He buys land to the horizon and builds a quasi-castle.  He is supported in this by Beck until, when Beck and McComb find Sam Slade dying of Shoshone Indian wounds, McComb fails to warn Stanley Moore fully of the Indian dangers when he heads into the Black Rock Range looking for more silver.  Moore is indeed killed, and Beck accuses McComb of being like the Biblical King David in lusting after another man’s wife and getting him killed.  (The analogy doesn’t seem to fit completely, although McComb isn’t sad when Moore dies.  He has always been interested in Moore’s wife.)  Beck goes his own way, and McComb marries Georgia Moore.  Pres. Ulysses Grant (Joseph Crehan played him eight times, something of a specialty for him) visits Silver City, and McComb and the other mine owners promise to produce ever more silver. 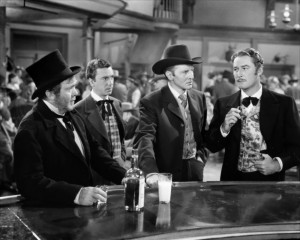 However, they have a falling out, and there is a silver war by the Western Combine against the McComb interests, with the silver mines shut down.  McComb is inadequately sympathetic to the plight of the miners, and Georgia leaves him.  He has to sell his holdings, there is a run on his bank, and he loses his castle.  Plato Beck runs for the Senate with Georgia’s support and wants McComb to understand his populist position.  As Beck begins to speak to a crowd of miners, he is shot down by Banjo Sweeney, now a henchman of the Western Combine and its leader Buck Chevigee (Monte Blue).

But McComb leads the miners in capturing Sweeney, his men and presumably the Combine leaders in Silver City.  The miners want to lynch them, but McComb insists on due process, and Georgia comes back to him.  Maybe he even takes Plato Beck’s place in running for the Senate. 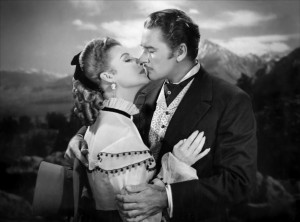 Mrs. Moore and McComb finally get together.

So it’s the rise and fall and at least partial redemption of silver king Errol Flynn, both morally and materially.  Flynn could really act; Ann Sheridan looks luscious with her hooded eyes, but Flynn is a better actor.  This was the fourth movie in which they starred together.  Flynn at only 39 was getting toward his last few movies by this time, and his career-long style of hard living, over-the-top drinking and constant debauchery was starting to take its toll on his looks.  But that works in this role, where he is supposedly aging over a period of years.  Tom D’Andrea is good as Pistol Porter, and Thomas Mitchell did what he usually did in alcoholic roles.  Bruce Bennett is decent but bland as the mining-engineer husband, but then he’s supposed to be.  And Barton MacLane chews the scenery as the conscienceless villain Banjo Sweeney.

This isn’t Walsh’s best western (maybe that was Colorado Territory the next year), and it was not a big hit in its time.  But Walsh often (but not infallibly) had a good feel for westerns.  You can sometimes see it in the composition of shots of the wild, mountainous landscapes with riders or wagons moving against them, or in the crane shots of crowds of milling miners with lots of action.  This isn’t often seen any more, but it’s worth watching both for Flynn’s performance and for Walsh’s direction.  And for the lovely Ann Sheridan.  It was the seventh and last time Flynn and director Walsh worked together. 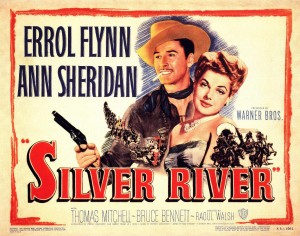 Shot in black and white, at 110 minutes, although there is apparently a slightly longer cut at 114 minutes somewhere.  A movie with this kind of scope in 1948 should have been shot in color, but it was a transitional period for such things in the movies.  It has been available on DVD from Warner Bros. Archive since 2017.