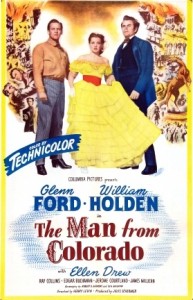 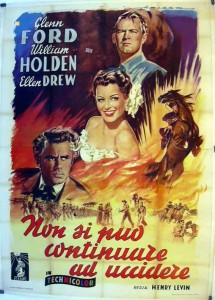 In 1865, a unit of Union volunteer cavalry led by Col. Owen Devereaux (Glenn Ford), a former lawyer, has 100 Confederates trapped at the mouth of a canyon in Colorado.  The southerners try to surrender with a white flag; the only man on the Union side who can see it with binoculars is Devereaux, and he gives the order to his artillery to fire anyway, killing all of them.  Later that day, the cavalry gets the news of Lee’s surrender, meaning the war is over and that day’s killing was unnecessary twice over.  Devereaux confides to his diary that he likes killing and wonders about his own sanity.

The men of the newly-demobilized unit are received back home in Glory Hill as heroes, except for Sgt. Jericho Howard (James Millican), who’s under arrest for celebrating too much.  He escapes and becomes an outlaw.  Devereaux is asked by Big Ed Carter (Ray Collins), a big mine owner, to become the local federal judge; he asks his best friend, Capt. Del Stewart, to be the federal marshal.  Stewart, who is starting to see signs that Devereaux might not be completely balanced, accepts with the proviso that Devereaux must put down his own gun and stick to interpreting the law.  Meanwhile, Devereaux and Stewart are rivals for the affections of Caroline Emmet (Ellen Drew); she decides she’ll marry Devereaux. 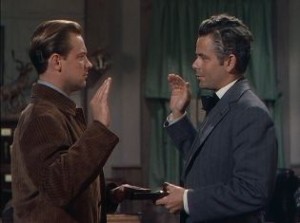 Stewart (William Holden) is sworn in as marshal by Devereaux (Glenn Ford).

Devereaux’s first big case concerns his own veterans.  Miners before volunteering, they have returned to their claims to find that Big Ed Carter and the Great Star Mining Co. say they own them now.  In court, it appears to be a matter of miner’s law (in effect before the war) against federal law, now that Colorado is a federal territory, which says that if a claim hasn’t been worked for three years then it is no longer good.  Over Stewart’s objections, Devereaux decides for Great Star and against his veterans, and most of them have no choice but to work for Carter and Great Star for $60 a month.

Meanwhile, outlaw Jericho Howard steals from Carter.  Stewart assembles a posse to give chase, and Devereaux joins it.  When Howard’s sidekick (one of Devereaux’s veterans) is captured, Devereaux gives him a trial on the spot and hangs him while Stewart is chasing Howard.  More men join Howard, and he robs Carter’s safe of $30,000, killing a mine employee in the process.

Dubious evidence implicates Jericho’s younger brother Johnny Howard and five others.  Stewart pursues Jericho and persuades him to come in to save his brother, but they arrive to find that Devereaux has summarily hanged Johnny and plans to hang the five others.  Even Caroline is horrified.  Carter reacts by firing all the Union veterans for fear they’ll help Jericho.  Stewart resigns as marshal.  Even Big Ed Carter worries about the near-civil war Devereaux’s decisions and behavior have created. 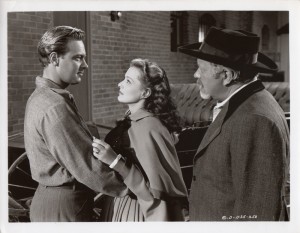 As Devereaux proceeds with the hanging, Jericho Howard’s outlaws arrive and rescue the five, led by Del Stewart.  Devereaux lures Stewart into a trap by getting news to him that Caroline needs help.  But Caroline gets Devereaux’s diary and convinces Doc Merriam (Edgar Buchanan) that Devereaux is unbalanced and they need to get word to the governor in Denver.  Caroline and Doc are helping Stewart escape from jail, when Devereaux arrives, wounding Stewart and blockading the mining camp where the three flee.

The camp all sympathizes with Jericho, Stewart and the veterans.  Devereaux sets fire to the camp and as it burns he sees and goes after Stewart.  As he does, Jericho Howard grapples with him, and a burning building collapses onto Devereaux and Jericho, rendering Devereaux’s removal as judge moot.  He has been removed in a more final sense. 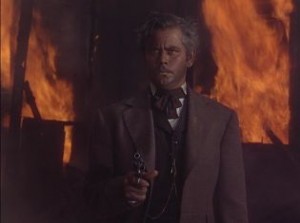 The increasingly psychotic Devereaux in the flaming mining camp.

Glenn Ford, with longish hair and silver brushed into his sideburns, is convincing as the more-and-more unhinged Devereaux.  Stewart is more straightforward, except for his continuing affection for another man’s wife.  Ellen Drew is the weak point in the cast, kind of a low-rent Maureen O’Hara.  Her character’s motivation is not well-developed; initially she looks like she’s just going for the flashier character with higher social status.  A more modern look would probably present Devereaux’s psychosis more as a form of PTSD (post-traumatic stress disorder), rather than irrational megalomania and an uncontrollable fondness for killing.  James Miilican is particularly good as the new outlaw Jericho Howard.

The title is a bit ambiguous, since both the protagonists are from Colorado, but presumably the title refers to Devereaux, who drives most of the action.  Shot at the Ray Corrigan ranch in Simi Valley in southern California. In color, at 100 minutes. 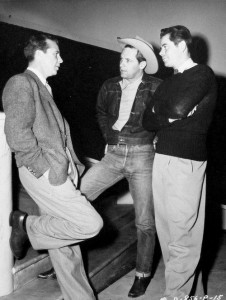 Dick Powell visits with stars William Holden and Glenn Ford during filming of The Man From Colorado.

For another film involving a western commander unhinged by the Civil War, see Robert Preston as Col. Marston in Anthony Mann’s The Last Frontier (1955), with Victor Mature.  For another early Glenn Ford western, see him with Randolph Scott in The Desperadoes (1943).  He and Holden had previously starred in Texas, 1941.  Ford’s post-World War II career began taking off a couple of years earlier than this film with Gilda (1946) and other films noir, but his mix always seemed to include westerns, the best of which was probably the original 3:10 to Yuma (1957).  William Holden had been in movies for about ten years (see 1940’s Arizona, for example) and was a couple of years away from his big breakthroughs in Sunset Boulevard and Born Yesterday (both in 1950).  His Oscar as Best Actor came in Stalag 17 (1953).  But he continued to make westerns as well; he’s very good, for example, in Escape from Fort Bravo (1953), directed by John Sturges.  The casting of The Man From Colorado now looks very smart. These guys became big stars.

Historical note:  The only Confederates vs. Yankees battle out west during the Civil War took place at Glorieta Pass in northern New Mexico Territory in March 1862, early in the war.  The Sand Creek Massacre against Black Kettle’s Southern Cheyennes was perpetrated by Colorado volunteers under Col. John Chivington in Nov. 1864, about 40 miles from Fort Lyon in Colorado Territory.  So the action depicted at the start of the movie appears to be entirely fictional.