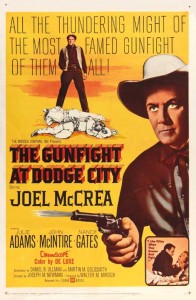 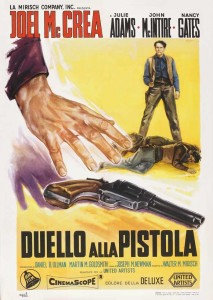 An aging Joel McCrea is Bat Masterson, out hunting buffalo when the movie begins.  He returns to Hays City, Kansas, to sell his hides and has a shootout with a sergeant who fancies a grievance over a girl.  Bat moves on to Dodge City, where his brother Ed (Harry Lauter) is the town marshal, but the Ford County sheriff Jim Regan (Don Haggerty) is corrupt.

Masterson is befriended by Doc Sam Tremaine (John McIntire, playing virtually the same role as he did in The Tin Star).  Ed introduces Pauline Howard (Julie Adams in an unusually sedate role), daughter of the local reverend, as his fiancée, and Bat buys into the Lady Gay (see Dodge City for a saloon of the same name in the same town), owned by young widow Lily (Nancy Gates), which is on the verge of being forced out of business by Regan.  After Ed is shot from ambush, Bat runs for sheriff and wins.  He hires sleazy Dave Rudabaugh (Richard Anderson) to deal faro, unaware that it was Rudabaugh who shot Ed.

As Bat cleans up the town, both Lily and Pauline become more interested in him, and it looks like he’s leaning toward Pauline.  When a friend from Hays City has a mentally-impaired brother who is sentenced to hang, Bat is asked to spring the kid so he can be dealt with in a more humane way.  He does it, but loses legitimacy in the eyes of his Dodge City constituency.  Regan comes back and they shoot it out.  Bat takes out Rudabaugh as well.  Bat is tired of Pauline’s judgmental attitude and ends up with Lily.

The plot doesn’t hang together terribly well.  Ed Masterson was killed in Dodge City, but not as depicted in this movie.  Note that in Wyatt Earp, when Earp meets Doc Holliday in Fort Griffin, Texas, he’s chasing Dave Rudabaugh, of whom Holliday has a very low opinion. In color.  This means that Joel McCrea played both Bat Masterson (here) and Wyatt Earp (in Wichita). 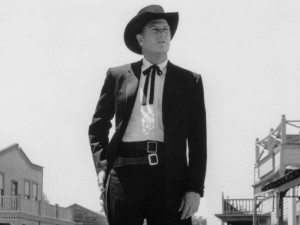 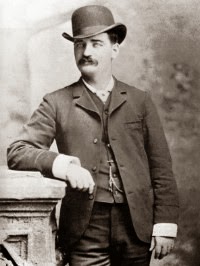