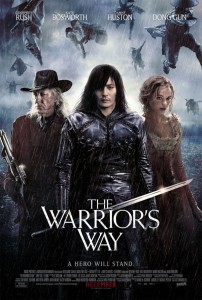 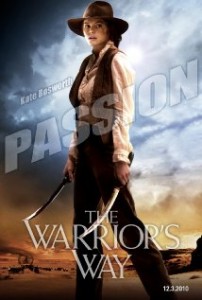 And now for something completely different:  A stylized Korean-made martial arts movie set in a ghoulish American West, complete with surreal circus, a dwarf, hordes of despicable outlaw thugs and invincible Asian assassins.  It was made in New Zealand, a truly international production.

“You are an assassin.  All you love, you will destroy.” 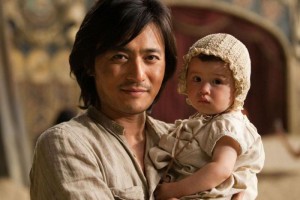 Swordsman Yang (Dong-gun Jang) and the baby he names April.

Yang (Dong-gun Jang), a member of the Sad Flutes clan of assassins, has made himself into the greatest swordsman in the world.  As this movie starts, he has been instructed to kill all his enemies in a rival clan, but, finding himself lonely and bored with the life of an invincible assassin, he deliberately does not kill a baby girl and thus incurs the wrath of his own clan.  As they attempt to kill him, he and the baby leave the shores of his own country for the deserts of the American West, arriving in the town of Lode, “the Paris of the West.”  It is practically a ghost town, home only to the crumbling remnants of a circus, with its aging performers, and a few others, including Lynne (Kate Bosworth), a comely young woman who aspires to become a knife thrower but has accuracy problems.

Yang is looking for an old friend, who appears to have run the laundry in Lode before his death the previous year.  The unofficial mayor of the town is Eight-Ball (Tony Cox), a former circus performer and dwarf.  Yang would take over the laundry, but he doesn’t know how.  Lynne teaches him, and they develop a relationship and mutual respect of sorts. 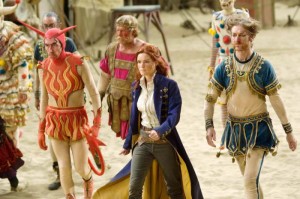 Lynne (Kate Bosworth) and a coterie of aging circus performers.

Yang:  “We are called Sad Flutes because when you cut the throat, the last sound is like a sad flute.”
Lynne:  “Dang!  Skinny, you sure know how to throw a dang cat in a party room, don’t ya.”

[Spoilers follow.]  By flashback, Lynne’s story is told, of how an invading band of outlaws led by the Colonel (Danny Huston) took over the town.  Lynne resisted his appetites for young females and escaped.  In doing so, she gave the Colonel massive facial burns and caused the death of her entire family.  Indeed, she was left for dead, too.  As is usually the case with such gangs, they will return (as was the case in The Magnificent Seven, for example).  Lynne wants to be ready, and Yang teaches her how to focus, and miraculously she becomes an expert at throwing knives and, with a little training, using short swords.

When the gang returns a second time, Lynne almost gets the Colonel, but he escapes.  He returns a third time with an even larger and nastier band of thugs.  Yang must defend his new home, and, in taking the seal off his sword, reveals his location to the Sad Flutes who are hunting him.  (Their leader can hear the voices of those Yang has killed with the sword when it is unsealed.)  With their arrival, a three-way battle follows.  The townspeople are organized to use dynamite strategically, along with the sharpshooting talents of aging marksman Ronald (Geoffry Rush).

The battle goes along formulaic lines, with the numerous outlaws being whittled down in picturesque fashion and also the Sad Flutes.  Several of the circus people are killed, too, including Eight-Ball as he tries to protect the baby.  Yang fights his way into the hotel, dispatching the Colonel’s remaining henchmen.  And when the Colonel threatens the baby he now holds,  Yang gets her back.  He otherwise leaves the Colonel to Lynne.  After an extended battle, she kills the unrepentant Colonel with his own sword.

The final part of the extended showdown is between Yang and his former master on a short hill outside of town.  Although Yang is the ultimate victor, his victory is not final in the sense that the remaining Sad Flutes are still hunting him.  He leaves the baby with Lynne and walks off into the glorious sunset with his sword.  In the movie’s final scene in the Arctic,  Yang finishes off yet another assassin with a frozen fish and goes off in search of another refuge.  The baby’s pacifier is a token on the guard of his sword. 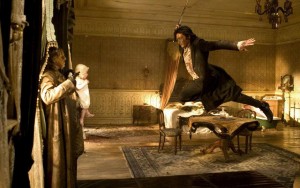 The movie is shot with a strong sense of style by first-time director Sngmoo Lee.  The movie is about action rather than plot, but there’s enough of each so that you’ll find it enjoyable if you have any taste for Asian martial arts films.  The body count is of course remarkably high, but as such things go, it is not unusually gory.  It is, for example, more restrained than Quentin Tarantino’s Kill Bill movies.  It is rated R for violence and occasional other distasteful elements, so it is not for young people.  It may be the best movie of its kind, though; it may also be the only movie of its kind among westerns.  There is an undercurrent of humor beneath it all.

The cast is quite good.  Dong-gun Jang is excellent as the swordsman Yang, although he is not required to show a great acting range.  Kate Bosworth and Geoffrey Rush are good in their parts; Rush is also the narrator at the beginning and end of the film.  Danny Huston, son of legendary director-actor John Huston and half-brother to Anjelica Huston, is kind of over-the-top as the principal villain, but that seems intentional and part of the overall stylized effect.  Tony Cox (Bad Santa) as the dwarf in charge does well, too. 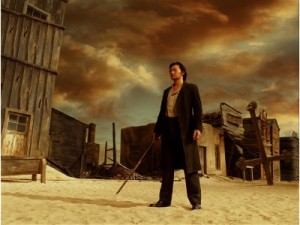 Shot in color in New Zealand, at 100 minutes.  It did not do well at the box office, costing $42 million to make and bringing in only $5,664,000 in the U.S.  If you’d like to see Asian martial arts in other westerns, check out the Jackie Chan-Owen Wilson comedies Shanghai Noon (2000) and Shanghai Knights (2003).  But they’re really not the same thing.