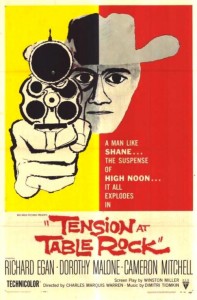 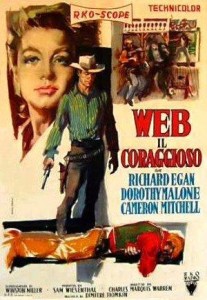 This is basically a bad-guy-goes-straight western, with overtones of the search for family and 1950s lawman-and-community tension.  Deep-voiced Richard Egan (his voice is reminiscent of Clint Walker’s) was never a big star, but he does well as the lead in this small western with an excellent and well-chosen supporting cast.  And it has an unusual and effective poster.

Wes Tancred (Richard Egan) has followed outlaw leader Sam Murdock (Paul Richards) since they both rode with Quantrill during the Civil War.  But when Murdock gratuitously kills a wounded gang member while fleeing a posse, Tancred decides to pull out.  Murdock’s girlfriend (a young Angie Dickinson in a very brief role) has a thing for Tancred and pours oil on the distrust between the two as Tancred tries to leave.  They shoot it out just as the posse arrives, and the girl tells them Tancred shot Murdock in the back.  However, he receives a complete pardon and even the reward for Murdock, which he spurns. 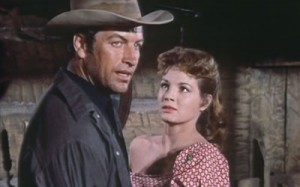 Now wherever he goes he hears “The Ballad of Wes Tancred,” referring to him as a cowardly backshooter.  He keeps moving and is at a stagecoach outpost when three robbers try to take a stage.  The caretaker tries to break it up and is killed, but Tancred, now going by the name John Bailey, gets the three and agrees to take the caretaker’s young son Jody (Billy Chapin) to his uncle, the sheriff in Table Rock.

The tension in Table Rock is because a herd from Texas is about to arrive, and the sheriff (Cameron Mitchell) is nervous about his ability to control the cowhands.  He was badly beaten and physically and psychologically scarred in an earlier incident, and has lost his confidence.  Tancred/Bailey understands because he has his own scars.  He helps Jody get a job with the local newspaper editor Harry Jameson (Royal Dano), who is vocal about keeping law and order.  Kirk (Edward Andrews), owner of the biggest saloon, welcomes the cowhands, whatever it takes.  The sheriff’s wife is loyal to him but shows signs of being attracted to Tancred/Bailey.

When big rancher Hampton (John Dehner) brings in his herd with fifty trail hands, he drives it across the land of a local farmer, destroying fences and crops (for which he is willing to pay, but he gives no choice).  The hands are mostly just barely under control, but that night one of them shoots the farmer and puts a gun in the farmer’s hand to make it look like self-defense.  The sheriff and Tancred/Bailey are witnesses, though.  In court the next day, the sheriff tries to back out, but Tancred/Bailey testifies straight, including his real name.  It’s a turning point for both Tancred and the sheriff.  Hampton threatens to come back the next day and get his man, and Kirk arranges for a gunfighter to take out the sheriff. 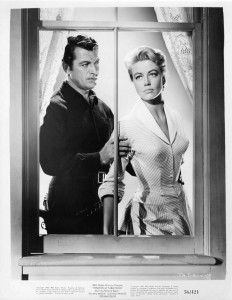 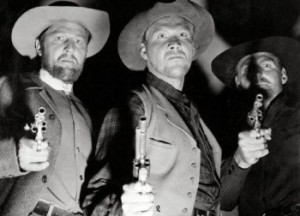 Gunfighter Jim Breck (DeForest Kelley) arrives the next day and turns out to be an old friend of Tancred.  Tancred asks him not to call out the sheriff, and it looks like he might accede.  But Kirk’s $2000 is too much for Breck, and Tancred and Breck have a classic showdown in the street.  Tancred wins, and Kirk is about to shoot him in the back when the sheriff takes down Kirk.  When Hampton and his fifty men ride in, they face the sheriff and Tancred—and the town’s populace with guns from the windows.  And Tancred leaves town so as not to threaten the sheriff’s marriage.

It sounds like a standard western tale from the 1950s, but the execution of it is better than average, even though it was from bargain studio RKO.  Egan, Mitchell, Chapin, Dano, Dehner, Kelley and Edwards are all good; Dorothy Malone is also good but is largely wasted in a small part here.  Kelley was in several westerns about this time, usually as some form of bad guy (The Law and Jake Wade, Warlock), as he bounced back and forth between movies and television before finding his greatest fame in Star Trek.  The development of the moral crises of Tancred and the sheriff is nicely done.  The story is slightly understated but mostly convincing.  This is better than you’d expect from the relative lack of star power and low budget. 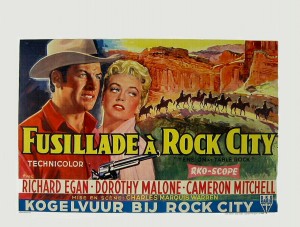 Charles Marquis Warren was a screenwriter, director and producer who made ten low-profile westerns as a director in the 1950s.  His best were probably this and Trooper Hook (1957), with Joel McCrea.  He even directed Charro!, Elvis Presley’s western in 1969.  The screenwriter here was Winston Miller, based on a story by western writer Frank Gruber, with music by Dimitri Tiomkin.  In color, at 93 minutes.

For a similarly good story about a man on the run who rides into town under an assumed name and comes to the aid of a beleaguered sheriff, see Face of a Fugitive, with Fred MacMurray (1959).