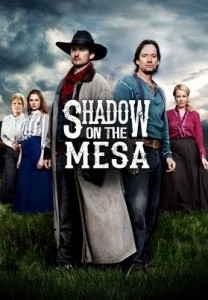 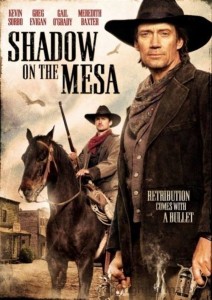 This was made for the Hallmark Channel, so you know some of what you’ll find here: a certain kind of beautiful nature cinematography in establishing the mood and setting, the triumph of right over evil (could be a given in most westerns anyway), some kind of affirmation of the value of human relationships.  Not bad stuff, really.  And that’s all here.

Wes Rawlins (Wes Brown) is a bounty hunter, and a proficient one.  As he returns from his latest trip, he receives the news that his mother has been murdered—beaten to death.  She had been rescured from Comancheros thirty years previously, taken in by the kindly Rawlinses (Barry Corbin and Meredith Baxter), and, when her son Wes was born seven months later, they raised him as part of their family. Now Wes hears that not only was his mother killed, but not long before her death she had finally found Ray Eastman, Wes’ father, “down Palo Duro way,” and had written him a letter. Wes decides to pay him a visit and find out why he abandoned his family and what he had to do with his mother’s death. 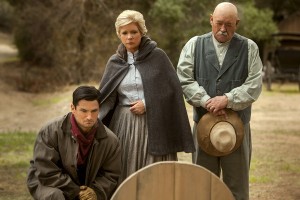 So Wes comes to town as the Mysterious Stanger with a Gun.  As Wes enters the local saloon, a loud-mouthed young man is causing trouble and Wes backs him off.  Turns out that both the loudmouth and the local sheriff are sons of Peter Dowdy (Greg Evigan), a neighboring rancher who wants Eastman’s land.  He is in fact conspiring with Eastman’s wife Mona (Gail O’Grady), and it was she who gave Dowdy the letter leading to the death of Wes’ mother.  Dowdy’s men killed her.

Wes rides in to the Eastman ranch, where Ray (Kevin Sorbo) has a bad leg and is on crutches.  He gives Eastman the news that Mary Rawlins has died, and from Eastman’s reaction is inclined to leave it at that and ride on.  The next morning as he leaves he encounters Eastman’s headstrong daughter Rosalie (Shannon Lucio), and they further have an encounter with Dowdy and two of his gunmen.  When the gunmen try to kill Wes, he takes them out and returns with Rosalie to the Eastman ranch. 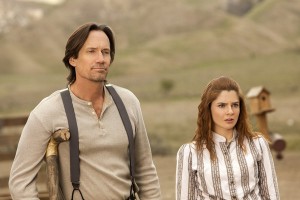 The Dowdy sheriff son keeps driving off Eastman cowboys and throws one in jail to lure Wes into town.  Wes breaks him out, and things get more violent.  Wes breaks the news to Eastman that he, Wes, is Eastman’s son, and he bonds with the existing Eastman son (Micah Alberti) and daughter.  Rosalie overhears her mother talking with Dowdy and discovers what’s been going on between them. Wes orchestrates the defense of the Eastman headquarters and goes looking for missing cowboys.  In the course of rescuing one, Wes and his new brother kill four Dowdy gunmen, including the loudmouth son.

Back at the Eastman ranch, Dowdy, having killed Mona as she pleaded for more time to work something out, is attacking the few defenders.  Eastman and his few remaining men take out some of them but things are going badly. Then Wes and his brother ride in and even the odds.  With some well-placed dynamite and good shooting, all but the Dowdy father are taken care of.  At the end, Dowdy tries a hidden gun on Wes, but that’s not going to work.  Eastman forgives the deceased Mona, Wes has a new family, and he rides off into the sunset. 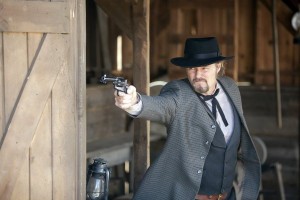 Greedy and corrupt Dowdy (Greg Evigan) attempts to take the ranch by force.

Kevin Sorbo is the best-known name in the cast, but he is not the main character.  That would be Wes Brown as the bounty hunter Wes Rawlins.  The writing is a bit clunky, but it’s not that bad.  Wes seems impossibly invincilble, but that can be okay in a western.  (See any of Clint Eastwood’s characters, for example, especially in spaghetti westerns.)  At least he doesn’t talk too much.  There’s lots of killing for a Hallmark Channel western.  In terms of production design, Wes’ hat and facial hair seem too modern.  A pleasant enough western, but not terribly memorable.  Short, at 79 minutes.