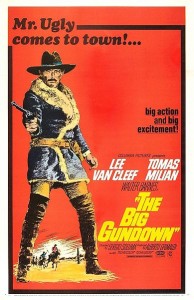 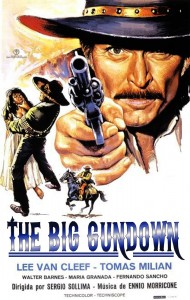 Broxton then sets Corbett on the trail of Cuchillo Sanchez (Tomas Milian), a scapegrace Mexican very good with a knife who supposedly raped and murdered a 12-year-old girl.  After several scrapes with Mormons, an isolated female ranch owner and a Mexican whorehouse, Corbett finds Broxton (with his German bodyguard) in Mexico; he also discovers that Broxton’s son-in-law Chet committed the crimes of which Cuchillo is accused.

In the manhunt, starting in a cane field and moving to rocky, mountainous terrain, Corbett sets up a showdown between Cuchillo with a knife and the Broxton son-in-law with a gun.  Then comes the big showdown between Corbett and everybody, including the German.  (Chennault’s Variation on a famous dictum of Chekhov:  “If a German gunman shows up in the first act, he will be firing before the end.”  See Vera Cruz and The Wild Bunch, for example.)  And Corbett and Cuchillo ride off into the sunset, one (Corbett) to the north and the other to the south.

Among aficionados of spaghetti westerns, Sergio Soliima enjoys a reputation as one of the three Sergios, behind only the great Sergio Leone and Sergio Corbucci as a director.  The Big Gundown is often reckoned one of the top ten spaghetti westerns.  Of course, it still has the limitations of its subgenre, and it’s not as good as Leone’s best work.  Cuchillo reappears, again played by Tomas Milian, in Sollima’s Run, Man, Run in 1968; it’s probably better, although this isn’t bad, as spaghetti westerns go.  The score by Ennio Morricone features kind of a shrieking theme song as well as “Chorus of the Mormons.”  This was released the year after Leone’s For a Few Dollars More and the same year as The Good, the Bad and the Ugly.  The version usually seen in the U.S. is a poorly-cut 84-minutes long.  Supposedly a 114-minute version exists. 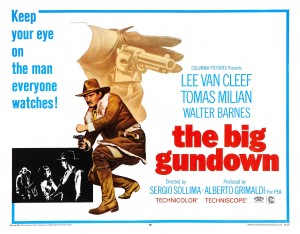