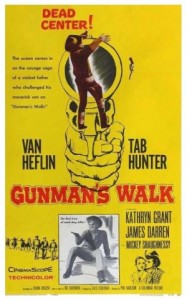 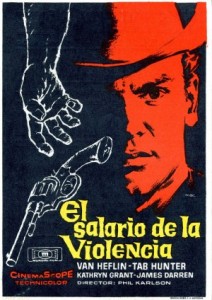 This is a son-goes-bad movie, a big-budget western, with Van Heflin (Shane, 3:10 to Yuma) as Lee Hackett, a prosperous and much-respected rancher with the largest spread in the state.  Sons Ed (Tab Hunter) and Davy (James Darren) are starting to differentiate themselves, but there are signs that one of them is going bad.

Ed, the blond older son and his father’s favorite, rides a half-breed wrangler (an uncredited Bert Convy) off a cliff while chasing a white mare on a horse drive.  Things look bad for Ed, who chafes under his father’s shadow.  But Ed is surprisingly exonerated at a hearing based on perjured testimony by itinerant horse trader Jensen Sieverts (Ray Teal).  Sieverts hopes to get some form of payoff from Lee Hackett in exchange for testifying.  Ed increasingly listens to neither his brother nor his father, nor even the local sheriff.  Younger brother Davy, who is dark and is said to look like his deceased mother, tries to strike up a relationship with Clee Chouard (Kathryn Grant), the half-Sioux sister of the dead wrangler.  Lee Hackett, who spent his younger years fighting the Sioux, finds the relationship highly unsuitable and expresses those feelings in intemperate words.

Meanwhile, brother Ed becomes less and less controllable and more apt to rely on his skill with a gun. He rejects the attempts of both his father and his brother to reason with him.  Finally, Ed shoots the horse trader Sieverts and is thrown in jail.  The trader lives, and Lee buys him off yet again.  Ed escapes from the jail, killing an unarmed deputy, and his father tries to find him before a posse does.  There is the inevitable confrontation and shoot-out.  In the wake of Ed’s death, Lee is reconciled with his only remaining son and with the mixed-race young lady.

James Darren has the thankless role of the the underappreciated good brother, who is romantically interested in the half-breed’s sister.  Heflin is good as the father.  Ray Teal is very good as the sleazy horse trader who perjures himself to get Ed off the hook and to get himself a payoff from Lee.  However, this is a clunky story, fairly predictable.  Even worse, there is clunky acting by Hunter and Darren, who don’t look at all like they might be brothers.  Saddle the Wind, from about the same time, does this story better.  Written by Frank Nugent.  Song “I’m a Runaway” is sung by Tab Hunter.  In color, at 97 minutes. 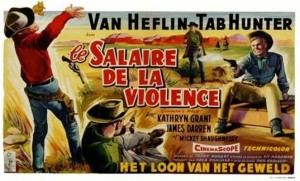