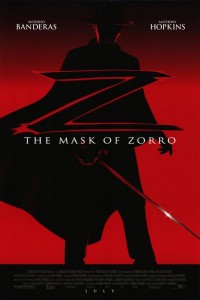 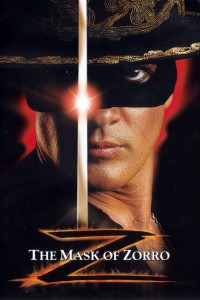 This overlong and overcomplicated revisit to the Zorro story differs from the source material (a 1919 novel by Johnston McCulley) in several ways.  One is the title.  Earlier versions with Douglas Fairbanks (1920) and Tyrone Power (1940) shared the title of the novel, The Mark of Zorro, referring to the Z that the sword-bearing bandit often carved into walls, draperies and unfortunate corrupt local officials.  Perhaps this new title emphasizes the transferability of the Zorro identity with the mask and other accoutrements.  In general, the movie is constructed as a series of set pieces and action segments, loosely held together by an erratic story.

This story has not one but two Zorros, one a dashing but untrained young outlaw (Antonio Banderas) and the other an aging former Zorro (Anthony Hopkins) seeking revenge for wrongs now a generation past.  As the movie starts in 1821, the Spanish are taking their leave of Alta California as the Mexicans under Santa Anna take possession of the Mexican realms.  The corrupt Spanish governor Don Rafael Montero (Stuart Wilson) makes one last attempt to capture his nemesis Zorro by excecuting three innocent peasants.  Zorro indeed makes one last appearance and rescues the three but gives away his identity to Montero.  Making a raid on the De la Vega mansion (very computer-generated in appearance), Montera’s men kill Diego’s wife Esperanza; Montero throws Diego into a dungeon and makes off with Diego’s infant daughter Elena to Spain.

Twenty years later, Montero returns, hoping to enlist those dons he had given land grants to join him in a gold-mining enterprise and takeover of California.  Diego escapes from his prison and encounters a drunken outlaw (Banderas) he recognizes as one of two Murrieta brothers who as children had helped Zorro escape during his final adventure.  The other brother, Joaquin Murrieta, has been killed by vicious American Captain Harrison Love (Matt Letscher), who turns out to be in league with Montero.

Recognizing that his age prevents him from being Zorro still, Diego trains the hot-headed Alejandro Murrieta as a younger Zorro—in swordplay, in manners, in riding and other skills he will need.  His initial foray in the role is nearly disastrous, but through luck and the assistance of the lovely Elena Montero (Catherine Zeta-Jones), he escapes.  Together, Diego and Alejandro plot to discover Montero’s plans and thwart them.

Don Diego de la Vega:  [Indicating the sword Alejandro is holding.]  “Do you know how to use that thing?”
Alejandro Murrieta:  “Yes.  The pointy end goes into the other man.”
Diego de la Vega [Sighs.]:  “This is going to take a lot of work.” 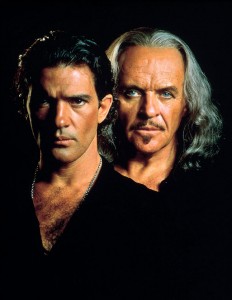 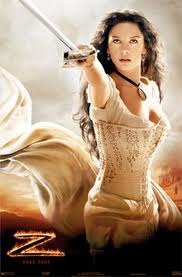 Alejandro arrives at the large estate where Montero is hosting a party for the local dons whom he hopes will support his plan.  Diego masquerades as his servant Bernardo.  In the course of the evening, Alejandro engages in a passionate dance with Elena, discovers where Montero is hiding his plans and maps, and is invited to join the larger conspiracy to take California.  Diego also meets Elena without revealing his identity as her father.  Capt. Love thinks he knows who Alejandro is, although the cultured young man bears little resemblance to the hairy outlaw he had been.

Alejandro makes a return visit to the Montero hacienda as Zorro, looking for the map to the gold.  He finds it.  In a stable, he also encounters Elena again, and they engage in swordplay and banter, in which Elena loses most of her clothing while confirming the attraction between them.

At the mine, which is run with slave labor, Capt. Love kills Three-Finger Jack (L.Q. Jones), who had been in the Murrieta brothers’ gang.  Alejandro puts on his Zorro garb and engages Love in battle.  Meanwhile, Diego, who had said he would no longer be engaged in Zorro’s exploits, shows up and fights Montero.  Predictably enough, Diego beats Montero with swords, but Montero cheats and shoots Diego while using Elena for cover.  These acrobatic battles center around a wooden crane for lifting gold out of the canyon where it is mined.  In the end, Alejandro vanquishes Capt. Love, who is crushed by a falling gold wagon which also pulls Montero to his doom.  Zorro and Elena rescue locked-up slaves from a complicated explosion, and Diego dies of his wound, surrounded by his regained family–Elena and Alejandro.

Anthony Hopkins is not convincing as the 35-40-year-old Zorro, but he does fine as Diego de la Vega at 60.  Antonio Banderas and Catherine Zeta-Jones make an enormously attractive couple, although they’re both playing at least ten years younger than their actual ages.  Stuart Wilson is a suitably serpentine villain.  The Capt. Harrison Love character, as he is played by Matt Letscher, is neither interesting nor necessary.  He seems to be a sort of pseudo-Custer character (a vain and venal American military commander with long blond hair) who has arisen sometimes in westerns now that Custer is no longer seen as much of a hero.  (See Barry Pepper in The Lone Ranger for another example.) 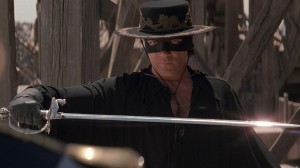 A lot of money was spent on this movie, and technically it’s very well done.  There are some nice comedic touches in the dialogue.  Since this doesn’t use much of the traditional Zorro story, it seems to partake more of the episodic nature of the Disney television series from the late 1950s starring Guy Williams—yet another example, perhaps, of a movie driven by nostalgia for a past television series (e.g., The Wild Wild West, Maverick, The Lone Ranger).  One trick is to keep the moviegoer from asking the Indiana Jones question (see the first Indiana Jones movie for one approach to this question):  The essence of Zorro is the use of the sword and perhaps a whip, but, especially by 1840, how much chance does a sword-wielder actually have against firearms?  That’s why the movie almost has to be set earlier.  Zorro’s beautiful black horse Tornado (Toronado?) is said to be a black Andalusian stallion, but horse fanciers claim that he is really a Friesian.  If the Joaquin Murrieta in this movie is intended to be the notorious California outlaw from gold rush times, he is placed about fifteen years too early here; the real Murrieta was killed in 1853, after California had become a state.

The film was a commercial success.  If you don’t look for much coherence to the story, this one works well enough, although its 2005 sequel (also directed by Martin Campbell), The Legend of Zorro, is worse.  The Fairbanks and Power movies from decades earlier are still better as movies, though.  In color, at 136 minutes. 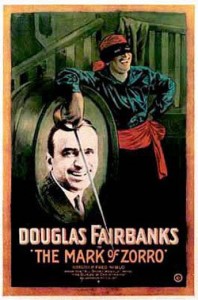 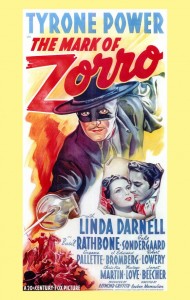 The first Zorro movie (1920, the year after the novel was published), with Douglas Fairbanks in the title role.  And a later (1940) version, with Tyrone Power as the dashing masked bandit avenging wrongs.  The character Zorro was a fictional creation, not an actual historical person.