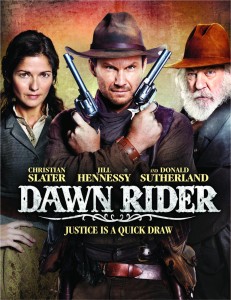 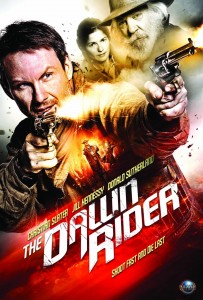 By the time of this movie’s release in 2012, Christian Slater was getting a bit long in the tooth and lower in the Hollywood pecking order than he had been twenty years earlier. Looking at the cast here, one concludes that this the modern equivalent of a B movie, which is only appropriate, considering that it is a remake of 1935’s The Dawn Rider with John Wayne, made at a period when Wayne was not yet a star and was only making B westerns.  Except for Slater, this appears to be a largely Canadian production.

John Mason (Christian Slater) is in Gray Falls, Montana, in 1883, when he rescues Ben McClure (Ben Cotton) in a card game that turns bad.  We hear that Mason is referred to as Cincinnati John Mason, although he has a recurring line about never having been in Cincinnati.  However, he has been the sheriff in Dodge City, a Texas Ranger, a Pinkerton man, and a prisoner in a Mexican jail.  He is hunted by bounty hunters from Missouri, led by U.S. Marshal Cochrane (a white-bearded Donald Sutherland in a brief but talkative role).  McClure works in the express office in Promise, Wyoming, with Mason’s father Dad Mason (Ken Yanko).  Father and son are not on great terms, but when a gang of hooded outlaws robs the express office and kills Dad, John wants revenge. 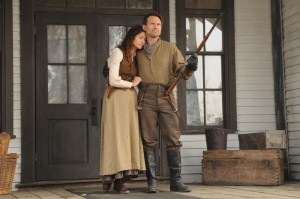 Also wounded in the attack on the express office, Mason is nursed back to health by his old girlfriend Alice Gordon (Jill Hennessy), who lives on the XX (Doublecross) Ranch with her brother Rudd Gordon (Lochlyn Munro), John’s childhood best friend.  Cochrane catches up to Mason and agrees to give him a couple more days to hunt for his father’s killers if he will surrender peaceably and without further resistance at the end of that time.  (This seems unlikely, given how hard a time Cochrane has had finding and capturing Mason.)  McClure wants Alice to marry him, but Alice and Mason have resumed an intimate relationship.

We see early on that the hooded outlaws are led by Rudd Gordon, who is about to lose the XX unless he can come up with $5000 in cash.  Gordon’s gang ambushes Cochrane and his men, leaving them for dead and planting hoods on them.  Mason is not persuaded.  He sets a trap for the gang, and they take the bait, killing the local sheriff as the trap is sprung.   As a final showdown looms, McClure takes the bullets out of Mason’s guns out of jealousy.  But when Mason meets Rudd and the surviving gang members, he notes that guns without bullets feel lighter, and he has reloaded them.  Rudd reveals his low character by his willingness to kill his own sister. 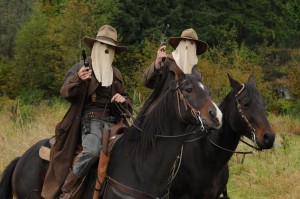 Finally, Cochrane shows up, revealing that Mason saved him after he was ambushed, and he takes Rudd into custody.  He also produces documents exonerating Mason and rides off into the sunset.  Mason, who blew up the express office money during the showdown, reveals that somehow $5000 of it has ended up at the XX Ranch, where he and Alice will presumably retire.

This isn’t absolutely terrible, but it’s not really good, either.  Slater is not a strong choice as the leading man.  The best performance here is probably by Jill Hennessy as Alice Gordon; she seems lively and a bit like a younger Charlotte Rampling.  The original movie was only 53 minutes long, and this is 40 minutes longer; the plot feels like it meanders a fair amount.  The film looks good, shot with a lot of gray and brown tones.  Everybody wears dusters, which look nicely western.  Although cowboys and others did wear dusters occasionally, if you look at old photographs of the west from that period, you don’t see them as often as they are worn in westerns since, say, The Long Riders made them cinematically fashionable in 1980.  They look great flying out behind a rider racing along, but they probably weren’t actually worn as much as movies like to show (e.g., The Lone Ranger, 2013). 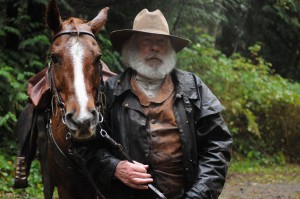 Shot in color in Vancouver, British Columbia, at 94 minutes.  It’s rated R for violence and a lot of unnecessarily bad language, which gets in the way.