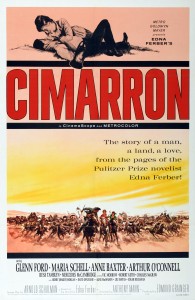 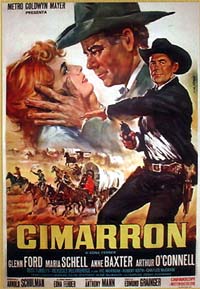 As a word, “Cimarron” is very evocative of the west.  Cimarron County, Oklahoma, is at the very tip of Oklahoma’s panhandle, neighboring New Mexico, southern Colorado, southwestern Kansas and the Texas panhandle.  It was named for the Cimarron River, which flows through the area and was crossed by the Cimarron Cutoff on the legendary Santa Fe Trail.  It was a remote area, late to be settled and brought under regular law—the area where Comanches killed mountain man Jedediah Smith in 1831 and not far from where the gunman Clay Allison had a ranch in the 1880s.  It is farther west than the area dealt with in this movie.

Edna Ferber’s large-scale 1929 best-seller was made into a 1931 movie that won the Academy Award for Best Picture, the first and, for 60 years, the only western to win that accolade.  Add to this previously successful mix Anthony Mann, one of the best directors of westerns from the 1950s, and a good cast for a modern update, and you should have a winner.  But it didn’t turn out quite that way.

Sooners in 1889. Yancey Cravat is among them.

The improbably-named Yancey Cravat (Glenn Ford) gets married at the start of the film in 1889. A lawyer at the time of his marriage, he has a bit of a backstory, some pieces of which emerge bit by bit. He has been a gunman and a cowboy, for example; he seems well acquainted with outlaws and prostitutes who refer to him as “Cim,” short for Cimarron. He insists that his new wife Sabra (Austrian actress Maria Schell) join him in the Oklahoma land rush. As they come to the starting line, they meet a string of Cravat acquaintances, notably Sam Pegler (Robert Keith); an itinerant newspaper editor and publisher; and his printer Jesse (Harry Morgan); the large but poor Wyatt family from Missouri (Arthur O’Connell and Mercedes McCambridge); a few outlaws, including the Cherokee Kid (Russ Tamblyn); a wagon of soiled doves, especially Dixie Lee (Anne Baxter); and Jewish tinker Sol Levy (David Opatoshu).

In the race Yancey loses the piece of property he wanted to Dixie, who seems to be trying to get it to spite him.  When he finds the Pegler wagon overturned and Sam dead in the wreck, he decides to try being a newspaperman instead of a rancher.  As the town of Osage develops, Yancey reveals that he has strong sympathies with underdogs (Indians and other minorities, the Cherokee Kid) and a tendency to take on responsibility in stressful situations.  When an innocent Indian is lynched, Yancey takes in the widow and daughter after taking out the ringleader Bob Yountis.  He has a son, whom he insists on naming Cimarron.  When the Cherokee Kid and his gang come to rob the local bank and take refuge in the local school, it’s Yancey who rescues the kids, if not the Kid.  He urges Tom Wyatt to drill for oil on his property, which Wyatt eventually discovers. 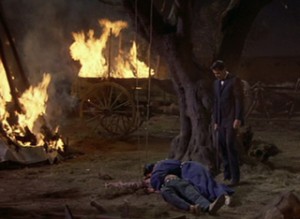 Yancey (Glenn Ford) is too late to stop a lynching.

Yancey is also a man who is always looking beyond his current horizon.  When Sabra refuses to join him in the rush to the Cherokee Strip farther to the west in 1893, Yancey nevertheless goes and disappears for five years.  He doesn’t write, but Sabra hears hints that he is in Alaska and then has joined the Rough Riders during the Spanish-American War.  At the conclusion of the war, he shows up in Osage again and is taken back by his family.  The newspaper prospers modestly, and in 1904 Yancey is offered the post of territorial governor, which he turns down because he’d be indebted to the oil interests led by Tom Wyatt.  (Presumably he would have been the last territorial governor; Oklahoma became a state in 1907.)

When he turns down the governorship, Sabra blows up at him and Yancey disappears again, for good this time.  When their son marries an Indian, Sabra drives the young couple away.  They go to Oregon and she never sees them.  Obviously, she doesn’t share Yancey’s sensitivity to minorities.  In the ten years after Yancey’s departure, the newspaper prospers with financial help from Sol Levy, who would like to marry Sabra.  In 1914, Sabra hears that Yancey has joined the British army during World War I.  The movie ends the next year when Sabra gets word from the British army that Yancey has been killed in France.

In the earlier film version, Yancey survives the war, only to die in the 1920s in an oilfield accident.  Sabra becomes a Congresswoman.  But this film is already two and a half hours long and forgoes that extended ending.  In the first version, Yancey comes and goes inexplicably.  This version focuses more on the personalities and relationship of Yancey and Sabra, and finally it’s an unsuccessful relationship.  In the 25 years covered by the movie, Yancey and Sabra are together maybe ten of those years, and little of the second five-year period is shown.  Sabra spends most of her time being unhappy with Yancey even when they are together.  We don’t really get Yancey, either.  It makes for kind of a glum film, especially in the long second half, when Yancey has disappeared much of the time.  And Glenn Ford often has distractingly bad hair.  Maria Schell is a decent actress, but she’s not as good as Sabra as Irene Dunne had been in 1931.  She seems excessively weepy, especially in the second half as the film moves into more melodramatic territory and just camps there.  All in all, it’s just not all that compelling.  And it did not do well at the box office upon its release. 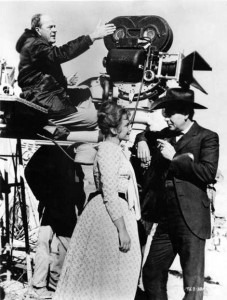 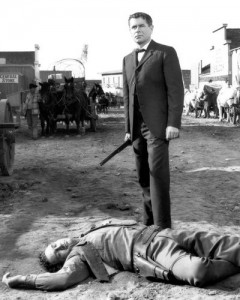 Maria Schell had appeared in one other western, Delbert Daves’ The Hanging Tree.  After this her career moved back into mostly European movies.  Anne Baxter is very good although underused here.  The land rush sequence is good, featuring several crashes and other mishaps.

This was Director Anthony Mann’s last western, and not among his better ones.  Mann was moving from westerns into the final stage of his career, when he focused more on epics like El Cid.  This had been a troubled production, with Mann being fired toward the end.  Reportedly producer Edmund Grainger filled in the editing of the last part without Mann’s participation or consent, which may account for why that part seems dull.  This version was written by Arnold Shulman and shot in color by the excellent cinematographer Robert Surtees.  There is good music by Franz Waxman, so the film looks and sounds good.  Long, at 147 minutes.