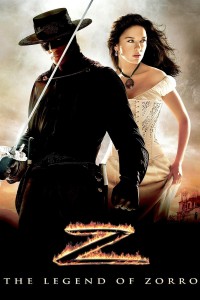 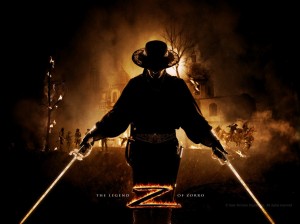 The 1998 recasting of the Zorro story (Two Zorros! The passing of the mask and sword!) in The Mask of Zorro was a hit with audiences, so a sequel was inevitable.  Anthony Hopkins’ Diego de la Vega died at the end of Mask, so he doesn’t return for the sequel.  But the attractive Catherine Zeta-Jones and Antonio Banderas return as Diego’s daughter and the replacement Zorro Diego trained before his death.

Now it’s 1850, and Alejandro (Antonio Banderas) has taken the De la Vega name (you’ll recall his original name was Murrieta).  He and Elena have been married for almost ten years, with a son named Joaquin (after Alejandro’s long-deceased outlaw brother).  Spanish California is American territory in the wake of the Mexican War and is now voting on statehood.  Although the Zorro story is traditionally set in southern California around Los Angeles, this one seems to be set in San Mateo, not far from San Francisco in northern California.  The De la Vega marriage is stressed; Elena wants Alejandro to throw in the cape and retire from the business of righting wrongs and fighting evil, while Alejandro thinks there is still a need for Zorro and resists retirement.

There are still villains, almost more than the viewer can keep track of.  The initial one is Jacob McGivens (Nick Chinlund), a nasty, scarred American religious fanatic trying to steal the statehood elections until Zorro leads him and his men on a merry chase.  During the chase, Zorro’s identity is momentarily revealed to a couple of other Americans (Shuler Hensley and Michael Emerson).  After this exploit, Alejandro and Elena argue and separate.  Alejandro seeks solace in strong drink.

Elena takes up with a French count Armand (Rufus Sewell) she had known in school back in Spain.  He seems charming enough, but the De la Vegas don’t agree about him.  Elena serves Alejandro with divorce papers, despite the fact that they are both presumably Catholic.

The De la Vegas are still attracted to each other (Catherine Zeta-Jones and Antonio Banderas).

As matters develop, during his brief unmasking Alejandro was identied by the two Americans, who turn out to be Pinkerton agents.  They use that knowledge to blackmail Elena into doing some spying on Armand for them, and that’s why she has broken with Alejandro.  However, they would view her demise as unfortunate but perhaps necessary to their enterprise.  The De la Vega son Joaquin thinks his father is a coward, unlike Zorro, so he’s clearly not in on the secret, and he constantly gets in trouble at school.  The nasty McGivens is working for Armand, who in turn is part of an international conspiracy (the Knights of Aragon, whose Latin motto is “Orbis Unum”—One World) which plans to weaken the U.S. before it can attain international prominence.  They plan to do that with strategic use of nitroglycerin made from soap.

Elena’s spying is discovered (she’s not very subtle about it), and she and Joaquin are taken prisoner on Armand’s train carrying the nitroglycerin to a rendezvous.  Alejandro rides as Zorro, both to stop the train and to rescue his loved ones.  He starts by defeating and killing McGivens and his minions.  He finds himself and his horse atop Armand’s train but manages not to get killed when it goes through a tunnel.  (The mounted rider atop a moving train is a sign the things are out of hand with the movie, as in 2013’s The Lone Ranger.)   Alejandro as Zorro manages to get Joaquin off the train, and he plays an active role in the rescue.  Eventually, Alejandro and Elena escape the train as it barrels toward the end of the track with Armand on the cowcatcher at the front and a car-load of nitroglycerin in bottles.  The De la Vegas are reconciled and remarried.

As with most sequels, this is not as good as the original—in this case, significantly worse.  The plot is incoherent and, with all the squabbling between Elena and Alejandro, uninteresting.  In the improbably prominent role for child Joaquin (Adrian Alonso) in the last part of the movie, he proves to be irritating, too.  There are too many villains, and consequently too many loose ends.  With a greater role for Elena than in the first movie, we can hear that Catherine Zeta-Jones’ Spanish accent is inconsistent and unpersuasive.

The story of Zorro is rooted in a particular historical place and time, and this film moves it farther from that place and time.  It seems to take place in northern California rather than in southern California.  It is quite cavalier about anachronisms:  The Pinkertons as an agency (or any agency like them) did not exist until the Civil War, about fifteen years later than 1850.  Nitroglycerin was not invented until the end of the 1860s, at least twenty years later than this film takes place.  It is unlikely that American bad guys in California in 1850 carried swords at all, let alone carrying them rather than repeating pistols.  That would place Zorro at a considerable weapons disadvantage, since he is primarily a swordsman.

On top of all that, there are many movie-making problems with the film, starting with a poor story and bad writing.  Although Zorro is acrobatic, much of the stunt work (and the editing related to the stunts) seems over the top and completely unrealistic.  This may not be quite as epically bad as, say, The Wild Wild West, but it belongs in the same category.  It had a budget of $75 million, but only made back just over $45 million, so apparently the movie-going public agreed in 2005.  It’s in color, and at 129 minutes it seems much longer than that.