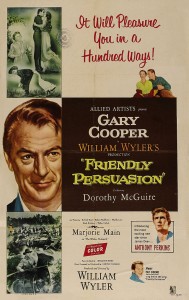 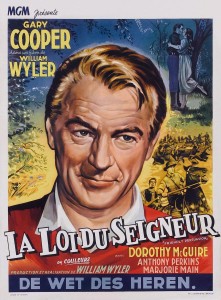 Not much of a western, this slow-moving story of a family of Quakers during the Civil War is set in southern Indiana.  The father is Jess Birdwell (Gary Cooper, looking pretty old for the part at 55 but a good actor; even at his age he didn’t want to play the father of grown-up children as he does here).  The mother and authority figure is Eliza Birdwell (Dorothy McGuire, effective in an unusually sedate role for her), a frequent preacher in the local Quaker congregation.  The Quakers are determined pacifists in a world spinning toward conflict in the Civil War.

“I want you to know, sir, I honor your prejudices–um, uh, convictions.”

Most of the tension, such as there is, comes from the non-conflict between hyper-religious Eliza and slightly more worldly Jess, who likes fast horses and buys a showy (to Eliza) small home organ.  Any potential conflict is muted, since it is made clear that the two are united more by their affection for each other, even when arguing, than they are divided by their different interpretations of what their religion requires.  The implication is that the two occasionally even, well, you know ….  It is a given that their religion sets them apart from their neighbors and is not understood by others. 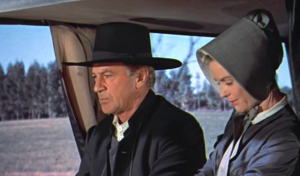 Meanwhile, their two older children Joshua (Anthony Perkins) and Mattie (Phyllis Love, a weak spot in the cast) are more affected by the Civil War than the parents are—Joshua by the necessity to fight when Confederate raiders under John Hunt Morgan approach, and Mattie because she is romantically attracted to a young local officer (Mark Richman, who seems too old for her even by 19th century standards).  Jess confronts violence when a Confederate raider kills his friend (Robert Middleton); he lets the soldier go.  Eliza confronts the raiders when they approach the family farm. Jess has to go off to the fighting in search of Joshua eventually.  They both come back.

The reticent but sly chemistry between Cooper and McGuire works.  The movie seems designed more to be heart-warming than anything else.  It was put together from stories by Jessamyn West, who also worked (uncredited) on the screenplay with the director’s brother Robert Wyler.  Music is by veteran composer Dimitri Tiomkin, the theme song sung by Pat Boone.  It is expertly directed by William Wyler, who would soon make the epics Ben Hur and The Big Country.  It also features the most effective cinematic use of a goose in the last 70 years. 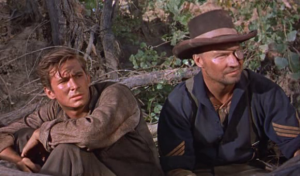 Son Joshua Birdwell (Anthony Perkins) does not fare well in the war.

Modern audiences may have forgotten what an effective character actor Robert Middleton was.  He was always reliably good (see him in a small part in The Law and Jake Wade and in Big Hand for the Little Lady, for example), and he’s excellent here.

The film was nominated for Best Picture, Best Directing, Best Supporting Actor, Best Sound Recording and Best Song Oscars.  This movie is still surprisingly effective at what it’s trying to do. It’s said to have been the favorite film of Ronald Reagan. In clear and beautiful color if you’re watching a good print or decent DVD transfer.  137 minutes long. 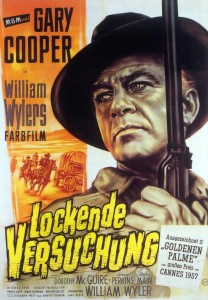 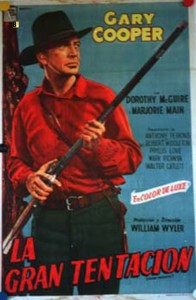 The marketing of this movie overseas clearly rested more on Cooper’s image from prior films than it did on the pacifist plot of the actual movie.  For another story about Quakers on the frontier, see them trying to convert John Wayne in 1947’s Angel and the Badman.