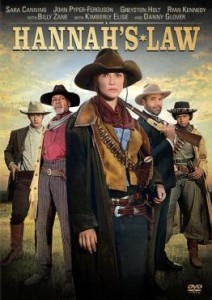 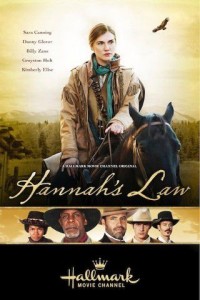 This made-for-television movie was produced for the Hallmark Channel and shows its awareness of its audience (largely female and older, but reaching for younger viewers, too) by embracing anachronistic attitudes toward feminism, killing, ethnic diversity and sex.  It is part of a line of female revenge fantasies going back at least to Hannie Caulder in the early 1970s and extending to the present through The Quick and the Dead (the one directed by Sam Raimi, not the one based on a Louis L’Amour novel) and 6 Guns (also made for television).  Although it attempts to introduce actual historical characters into its story, it takes some of them (Isom Dart, Stagecoach Mary) out of their actual times and locations.  This appears to be set in Dodge City when Wyatt Earp (Greyston Holt) was a deputy there, making it the late 1870s.  Doc Holiday (Ryan Kennedy) is also a character (relying heavily on Val Kilmer’s performance in Tombstone for inspiration), but Doc and Wyatt do not yet appear to be friends.

Hannah Beaumont’s family was killed by ruthless post-Civil War outlaws twelve years ago.  She (Sarah Canning) was raised in the orphanage in Dodge City and tutored in bounty hunting by Isom Dart (Danny Glover).  Now, one by one, she’s bringing in members of the gang that killed her family, without killing any of them.  Physically, she’s attractive but fairly small.  Wyatt would like to advance his relationship with her, but she’s not paying attention.  At least once, she sleeps recreationally with Doc.  She has carefully interracial relationships with Dart and with Stagecoach Mary. 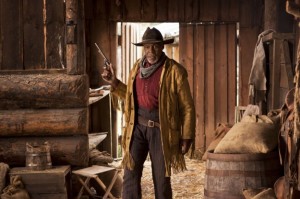 Frank McMurphy (John Pyper-Ferguson), head of the outlaw gang, finally figures out his men are disappearing and decides to get Hannah before she gets any more of them.  Isom Dart, now wanted himself, has returned to Kansas, and McMurphy thinks Hannah will be looking for him.  (She’s actually plenty easy to find herself in Dodge, so this subterfuge isn’t necessary.)

As McMurphy and his gang come to town, everybody appears to desert her at the instigation of the town boss (Billy Zane), even her friends Earp, Isom, Holliday and Mary.  Predictably, they haven’t really deserted her, but she (not terribly believably) bears the brunt of the fight.  As Wyatt is forced to shoot McMurphy, the bad guy has just revealed to Hannah that her brother is still alive but did not say where he is or what name he is using, clearly setting up a potential sequel. 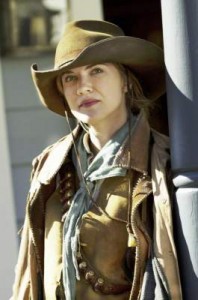 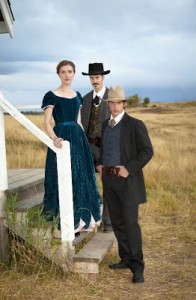 Stagecoach Mary (real name:  Mary Fields) was actually significantly older than Isom Dart.  She would have been around 45 at the time of this story, a former slave living in Florida.  Around 1883 she moved to Montana, where she became known by her nickname.  Isom Dart would have been about 25-30 years old at the time of this story, not the 60-ish shown.  A rustler, he was killed around the turn of the century by Tom Horn in Brown’s Hole, where Wyoming, Utah and Colorado come together.

Uses of minorities in westerns are welcome, but one would like to see them used more authentically and less anachronistically than this.  Similarly, it would be good to see more female directors of westerns like Rachel Talalay–especially of good westerns.  This was kind of a low-budget production ($5,000,000), and it’s short at 88 minutes.  Shot in Alberta, Canada.