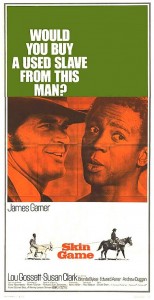 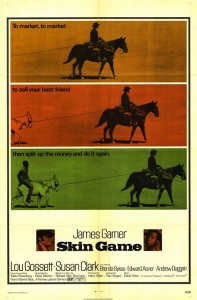 This was the third and last of the three good western comedies starring James Garner in his amiable con-man persona.  Some might also consider Sunset and Maverick from late in Garner’s career to belong in the same category, but this is Garner in his prime.  Here he is ably joined by Louis Gossett and Susan Clark.

Not long before the Civil War, Quincy Drew (Garner) and his friend and partner Jason Rourke (Gossett) are running a con in Missouri.  Jason is a free black man from New Jersey; the two met in a Pennsylvania jail and started working together.  The two of them ride into a town in a border state, with Quincy pretending to be an impoverished slave owner reduced to selling his favorite slave.  He conducts an impromptu auction, usually in a bar, and rides out of town with the proceeds.  Jason later escapes at an opportune moment and rejoins Quincy, to repeat the con in another town.

They find themselves in Kansas, which is voting on whether to adopt slavery amid high political feelings on both sides.  Quincy puts Jason in a larger slave auction, but things don’t run smoothly this time.  Jason becomes enamored of Naomi (Brenda Sykes), another young slave up for sale.  Quincy is attracted to Ginger (Susan Clark), with whom he strikes up a liaison.  Matters are further complicated when fiery abolitionist John Brown (played by Royal Dano) shows up and violently liberates the slaves, and Quincy finds that Ginger has liberated him from his stash of money.

Jason and Quincy manage to find each other again, but matters still do not run smoothly.  Trying the con just one last time, Quincy’s con is exposed by Plunkett (Ed Asner), a nasty slave trader who has already bought Jason once.  Plunkett takes Jason south and sells him down the river, and Quincy is tossed in jail.  To Quincy’s surprise, Ginger manages to spring him from jail and volunteers to help him rescue Jason.

Quincy (James Garner) is taken with (and by) Ginger (Susan Clark).

They pose as medical missionaries seeking a slave with leprosy, as they look for wherever Jason may have been sold.  They find him at the Calloway plantation in Texas, with Naomi and several African recent arrivals who don’t speak English but have a way with horses.  The Africans have adopted Jason as their leader, and he refuses to leave without them.  Quincy is exposed while plotting their getaway, and is given a taste of the whip.  But the group manages to escape and head for Mexico.  It looks like Quincy and Ginger will stick together, although they still have issues about who’s in control and who holds the money.

As a western comedy, this is fairly successful.  It seems unlikely that a comedy with slavery as one of its central elements would be made today.  Among filmmakers, the current sensibility is not to see slavery as an element of history, but to portray it as so unrelievedly evil and patently wrong that no comedy can exist in its presence.  But in the late 1960s and early 1970s there were two good western comedies involving slavery: this, and 1968’s The Scalphunters, with Burt Lancaster and Ossie Davis.  Django Unchained (2012) also comes to mind as a recent western involving slavery with some comedic elements, but it is not primarily a comedy and Quentin Tarantino is unusually strong-minded in going his own way as a director.  The slavery element will rub some viewers the wrong way, but this movie does not condone slavery in any way.  If anything, it expresses some slightly anachronistic but perhaps accurate views of how slavery affected people, as Quincy is educated in how it feels.  It’s worth watching but seldom seen.

James Garner is the principal reason to watch this, but Lou Gossett balances him nicely in a strong performance.  The friendship between them is persuasive.  To see more comedic Garner from the same period, look for Support Your Local Sheriff (1969, perhaps his very best movie and role of this kind) and its sequel of sorts, Support Your Local Gunfighter (1971, with mostly the same team but not as successfully done).  Susan Clark is surprisingly good as the amoral pickpocket-con woman Ginger, a good match for Garner’s Quincy.  To see her in another western, check her out as Burt Lancaster’s reluctant hunting companion in Valdez Is Coming, also from 1971.  Ed Asner as Plunkett also makes an excellent despicable slave trader and villain.  As another villain, see him as greedy range boss Bart Jason in El Dorado (1966), with John Wayne and Robert Mitchum. 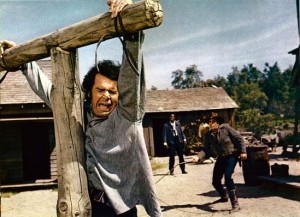 A taste of the lash for Quincy when he is discovered trying to free slaves.

In color, at 102 minutes.  As with Django Unchained, there is heavy use of the “N-word,” which is probably historically accurate.  Not to be confused with the seldom-seen Alfred Hitchcock movie from 1931, The Skin Game.  The characters from the movie later appeared in a made-for-television sequel Sidekicks (1974) directed by Burt Kennedy, with Lou Gossett reprising his role as Jason Rourke (or O’Rourke) and Larry Hagman playing the part of Quincy (or Quince) Drew.  This time the two con artists after the Civil War hatch a scheme to collect a $15,000 bounty offered for the capture of an outlaw.  For another comedy from the same period with slavery as one of its key points, see The Scalphunters from 1968.