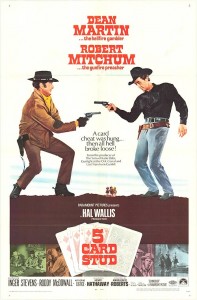 With a great production team, good cast (except for one), and decent budget, this should have been better.  The weakness is probably in the story and other aspects of the writing.  Directed by Henry Hathaway shortly before True Grit (one of his last movies), produced by Hal Wallis, with music by Maurice Jarré.

March 1, 1880:  Gambler Van Morgan (Dean Martin) is in a seven-man game of five card stud in Mama’s Place in Rincon, Colorado.  He takes a break and returns to the game minutes later, only to find that during his brief absence a stranger in the game was caught cheating and taken out to be lynched.  This is all driven by the local cattle baron’s son Nick Evers (a miscast Roddy McDowell).  When Morgan rides up to stop the hasty hanging, Nick pistol-whips him and he’s left in the street at Rincon.  Morgan leaves for Denver after paying a visit to the Evers ranch, where he says goodbye to Nick’s sister Nora (who’s clearly got a thing for him although he holds back) and punches Nick. 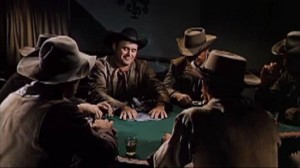 The fatal game of the title.

The Rev. Jonathan Rudd (Robert Mitchum in another of his skeevy preacher roles) shows up in town to rejuvenate the church.  He’s clearly good with a gun, too.  Those in the fatal card game start to die one by one, with various forms of smothering and strangulation.  The movie at this point becomes a whodunit–or a who’s doing it, and why.  Morgan returns to Rincon and meets Lily Langston (Inger Stevens), the new local madam at a tonsorial parlor.  The town’s nerves are on edge, and some miners start a shootout.  As matters work out, Jonathan Rudd is the brother of the card cheater, and Nick has been feeding him the names of the card players one by one.  There’s some tension as to how things will work out until Rudd goes too far by believing Nick and killing bartender George (Yaphet Kotto), who was not a participant in the game.  At least Rudd then kills Nick and has a final showdown with Morgan.  Morgan leaves town for good, but he seems to have chosen Lily over Nora.

A miscast Roddy McDowell doesn’t have enough of an edge for the role of Nick, and his accent doesn’t work.  Though this is a late western for Dean Martin (Rough Night in Jericho, Bandolero!, Showdown) and Inger Stevens (Firecreek, Hang ‘Em High), they are sometimes shot so their ages show.  That shouldn’t be the case, particularly with Stevens.  There is a good supporting cast:  Kotto, John Anderson (the local marshal), Denver Pyle (Sig Evers, father of Nick and Nora), Ruth Springford (Mama Malone, saloon proprietor).  The script has a flavor of late 1960s anti-establishment feeling about it, and a lot of people get killed.  There are several occasions when people seem conveniently not to hear gunshots. 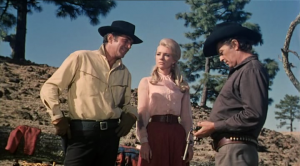 Van Morgan:  “You’ve preached a lot of funerals around here lately.  You got something new for this one?”

The Rev. Jonathan Rudd:  “The funeral is for the living, Mr. Morgan.  I’ll say what his folks want to hear:  that Nick Evers was a good son, a good brother, a loyal friend and a respected citizen.”

Morgan:  “You think you won’t gag on all that?”

Robert Mitchum narrowly escaped being crushed by a falling camera during shooting on this film.  The theme song (written by Jarré) is sung by Martin.  Screenwriter Marguerite Roberts also did True Grit.  This is a possible remake of 1950’s noir-ish Dark City (Charlton Heston’s screen debut).  Shot in color in Durango, Mexico.  103 minutes long.