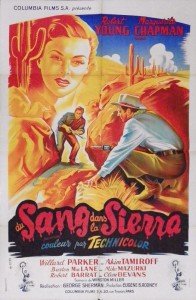 In the early 1940s, Robert Young was being groomed to be a major star.  He appeared in primary roles in two big-budget movies with western connections:  1940’s epic tale of the French and Indian War, Northwest Passage, with Spencer Tracy, and 1941’s tale of Manifest Destiny and technological expansion in Western Union, with Randolph Scott and Dean Jagger.  He was outshown by Tracy and by Scott in each of these.  After the war he didn’t make many westerns, but he made this one.

The title refers to Nick Buckley’s pursuit of the man who can clear his name.  Nick Buckley (Robert Young) is a drifter with a thoroughbred horse that has just foaled.  The horse is stolen and ridden to death; when Nick catches up with the thief, they shoot it out and Nick kills him.  A witness to the confrontation (Barton MacLane) says he’ll tell the sheriff about the shooting and that Buckley shot in self defense; instead he tells the sheriff Nick killed three miners for their claim, and Nick now has a price on his head.  The only way to clear his name is to find the witness, Tex Brandow (MacLane), and get him to tell authorities the truth. 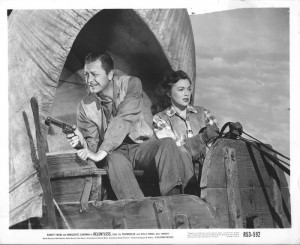 While trying to escape a posse and keep the foal alive, Nick falls in with Luella Purdy (Marguerite Chapman), a young woman with a wagon who intends to return east now that her father is dead.  She helps Nick escape twice, and Nick finally tracks down Brandow at the disputed claim, only to see him shot down by gambler Joe Faringo (Akim Tamaroff) and his henchman Jake (Mike Mazurki), who want to kill Nick and take the claim.  Luckily the sheriff Jeff Moyer (Willard Parker), who hasn’t believed Nick up to this point, is a witness to Brandow’s dying confession, and Nick and Luella ride off together, presumably to quit drifting.  There’s a soulful burro named Sappho that fosters the foal.  Pleasant enough but unremarkable; not much seen these days.

Young didn’t catch on as a major star after the war, but in the television age he did become a significant star in that new medium.  He is remembered now principally for his roles as the ultra-competent father in Father Knows Best from the 1950s, and as the kindly and omniscient Dr. Welby from Marcus Welby, M.D., in the 1970s.  He’s not bad here, but the spunky Marguerite Chapman tends to be who you remember from this movie.  She was in Coroner Creek with Randolph Scott the same year as this film was released.

More than twenty years in the future, director George Sherman would still be making the occasional western, even some good ones like Dawn at Socorro and Big Jake, although many were B movies, especially in the 1950s.  This one was shot in color in Simi Valley, California, at 93 minutes.