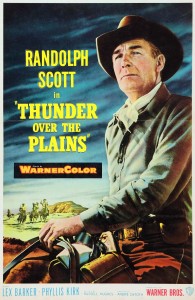 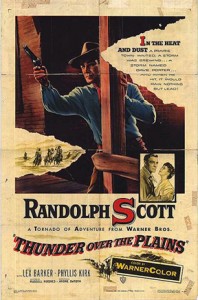 Cavalry, carpetbaggers and quasi-vigilantes clash in 1869 Texas, before the state was re-admitted to the Union following the Civil War.  Captain (and native Texan) Dave Porter (Randolph Scott) and wife Norah (Phyllis Kirk) are finding Texas not entirely comfortable after he fought for the Union in the late unpleasantness between the states.  In part Norah’s discomfort is not only because she isn’t a native Texan like her husband, but perhaps also because she seems much younger than he—30 years, maybe?

Porter’s commanding officer Lt. Col. Chandler (the fussy Henry Hull) is mildly sympathetic to Porter’s concerns, but mostly he doesn’t want to mess up with the brass in the two years before he can retire with his pension.  Porter doesn’t really want to exterminate the local vigilantes led by Ben Westman (Charles McGraw, with the subtle name for his character) because he sympathizes with them to some extent.  Elisha Cook, Jr., is Joseph Standish, a corrupt tax assessor, being run by the more corrupt developer and cotton broker Balfour (Hugh Sanders). 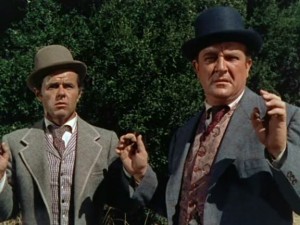 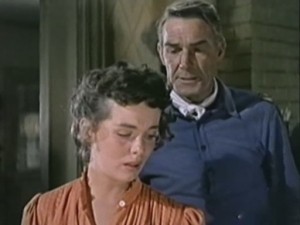 Dave Porter (Randolph Scott) tries to talk things out with wife Norah (Phyllis Kirk), but she’s having trouble seeing it his way.

Matters are further complicated when cavalry reinforcements arrive, led by handsome young Capt. Bill Hodges (Lex Barker, fresh off several performances as Tarzan), who knew Norah in a former life.  He’s a smug, by-the-book type who cares nothing about the locals but only about black-and-white orders.  Westman is falsely accused of the murder of Henley, a Balfour informer, and Porter tries to buy time to find the real guilty party (Balfour).  But Hodges starts shooting prematurely and also dishonorably makes a play for Norah, and Porter finds himself a wanted man for having released Westman from custody.  Fortunately, things work out as they should, after some angst for the Porters.

Capt. Bill Hodges (Lex Barker):  “I don’t know.  She married a colonel, I think.  Maybe it was a general.  At any rate, she outranks all of us.”

Norah Porter:  “But that’s wonderful!  Now she’ll have her lifelong ambition to lead the cotillion.  Well, I guess that’s what I always wanted too.”

Hodges:  “You don’t have anything like that around here, do you, Captain?”

Capt. David Porter (Randolph Scott):  “Oh, I don’t know.  The Indians come down once a month and dance for us.” 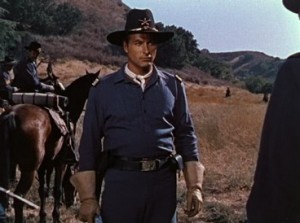 Westman’s friends abduct the corrupt Standish, intending to trade him for Westman before he can hang, but Col. Chandler is having none of that.  Dave Porter is about to get Standish to provide written proof that Balfour killed Henley when the increasingly sleazy Hodges raids the camp and shoots Standish, apparently trying to get Porter.  When he brings in Westman’s men and Porter, they manage to escape.  While Porter finds Standish’s evidence, Balfour and three henchmen try to kill him.  Of course they fail.  He is, after all, played by Randolph Scott.  And Hodges gets sent either (a) back to Washington in disgrace, or (b) to an assignment in dangerous Indian territory–Chandler gives conflicting signals about which it is.  And a little voice-over narration neatly wraps up Reconstruction in Texas and returns its government to the locals much more congenially than it actually happened.

The title has no apparent relationship with the movie’s content.  Randolph Scott always looked good in a cavalry uniform, with his straight-backed bearing and obvious rectitude.  Fess Parker has a brief part here (and in The Bounty Hunter) before becoming more widely known as Davy Crockett on television.  There is heavy-handed voice-over narration at the start and end.  In all, this is a decent job by one-eyed Hungarian director Andre de Toth, although it’s not his very best work.  That would be Ramrod (his first western, with Joel McCrea) and Day of the Outlaw (his last western, with Robert Ryan).  But this is one of the better efforts from his Randolph Scott period in the early 1950s, when De Toth and Scott made six westerns together.

Screenwriter Russell Hughes also did Anthony Mann’s The Last Frontier and Delmer Daves’ Jubal, as well as giant bug movie Them.  Cinematography was by Bert Glennon.  In color, at 82 minutes. 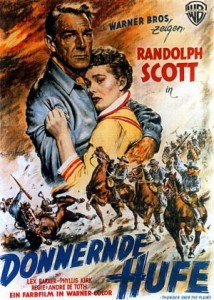 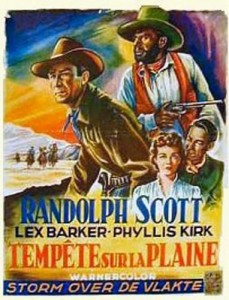 For another movie about Texas during the carpetbagger Civil War aftermath, see Three Violent People, with Charlton Heston and Anne Baxter (1956).