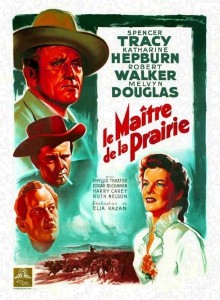 Spencer Tracy and Katharine Hepburn were one of the great pairs from Hollywood’s golden age, appearing in nine films together.  This one is based on a 1936 novel by Conrad Richter, reckoned a considerable literary light in his time.  The director, on only his second movie, was Elia Kazan, who turned out to be one of the greats.  There’s a terrific supporting cast, and an excellent screenwriter in Marguerite Roberts (Ambush, True Grit).  A superb cinematographer is on board in Harry Stradling.  Should have been a recipe for a classic, right?  Well, it’s probably one of the two least-watched of the Tracy-Hepburn collaborations, along with Keeper of the Flame.  This is a family saga-range war story, albeit one with more literary roots than is normal for such tales, and it’s also an easterner-comes-west-and-doesn’t-get-it melodrama.

In 1880, Lutie Cameron (Katharine Hepburn) of St. Louis decides to marry Col. James B. Brewton (Spencer Tracy) of Salt Fork, New Mexico Territory after a short courtship in St. Louis.  He’s the biggest rancher in the Salt Fork area, consisting of high (7,000 feet) plains he calls “the sea of grass.”  Brewton owns the water holes in the sea of grass, but he does not have title to the thousands upon thousands of acres he uses as grazing land for his many cattle. 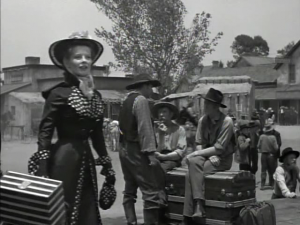 Brewton was unable to come to St. Louis for the wedding because he’s embroiled in a trial with Brice Chamberlain (Melvyn Douglas) as opposing counsel.  A homesteader was shot and driven off his 160 acres, and Chamberlain’s representing him in suing the supposed assailants.  As Lutie arrives, she meets Chamberlain in the local hotel while looking for Brewton.  He is obviously taken with her.  As he returns to court, the jury finds that the homesteader was attacked by “parties unknown.”  Brewton reiterates his view that the high sea of grass won’t work for farming (much as John Wayne’s G.W. McClintock would put it in the comedy McLintock! twenty years later).

Lutie and Jim are married in town, and Jim takes her out to the ranch, where the nearest neighbor is fifteen miles away.  She doesn’t get Jim’s insistence on keeping the land as grassy range, but she wins over Jeff, the ranch’s crusty cook (Edgar Buchanan).  The Brewtons have a daughter, Sarah Beth, and Lutie talks Jim into allowing her friend Selina (Ruth Nelson) and husband Paul to homestead, although he says they will only last six months.  During a winter blizzard, the Brewton cattle knock down Paul’s fences; he shoots one and is beaten by Brewton riders.  Selina loses her baby and terminates her relationship with Lutie.  Chamberlain tries to talk Lutie into running away with him. 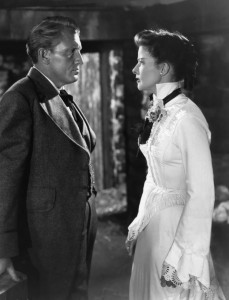 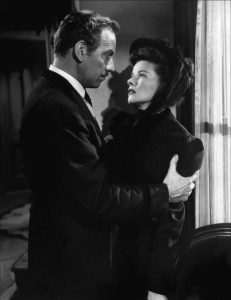 After a couple of years (one character or another frequently announces that it’s been two years since the previous scene), Lutie takes off to Denver to shop and perhaps to take an extended break.  While there, she encounters Chamberlain at the historic Brown Palace Hotel where she’s staying, and they indulge in a night of passion.  But Lutie discovers that she loves Brewton and goes back to Salt Fork, only to realize that she’s pregnant with Chamberlain’s child.  When she gives birth to a boy, she tells Doc (Harry Carey) and Jim the truth while she’s apparently out of her head.  Things are never the same between them again.  She goes back to St. Louis after another two years; Brewton keeps the children.

Chamberlain is appointed a federal judge and sees that the range is opened to homesteaders with the support of the cavalry.  At first they do all right, when there’s a lot of rain.  But after two or three years of drought, their farms blow away and there’s no longer grass to hold the soil down.  The Brewton children grow up; Sarah Beth (Phyllis Thaxter) goes east to school, and son Brock (Robert Walker) becomes a wild hand, good with a gun.

When Sarah Beth comes home, she finds that Brock is largely out of control.  His birth circumstances are an open secret in Salt Fork, and when another gambler brings it up during a card game, Brock shoots him.  He jumps bail despite Jim’s asking him not to, and a posse finally hunts him down about the time Lutie comes back to Salt Fork.  After fighting it out with the posse, Brock dies in Jim’s arms, and Jim and Lutie are finally reconciled.  Presumably the settlers did not survive the drought on the sea of grass. 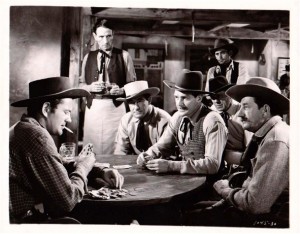 Brock Brewton (Robert Taylor) gets into a dangerous game.

For a couple whom we know to have been romantically involved for years, including while this movie was made, and who had superb chemistry in other films, the relationship of Tracy and Hepburn is curiously flat throughout this one.  We never see what brought the Brewtons together; they have few interests in common and disagree on a big one that affects Col. Brewton.  There are several occasions when it seems like these people could resolve matters between them if they would just talk to each other about them.  When they don’t, that tends to be frustrating in a movie.  Tracy, who was a superb actor, doesn’t show much range in this film.  Hepburn, as Lutie, is not terribly sympathetic, in part because the writing doesn’t play to her usual strengths and independence.  If you like melodrama, this may be your cup of tea, though.

This was director Elia Kazan’s only western.  In his autobiography, his comment on it was, “It’s the only picture I’ve ever made that I’m ashamed of.  Don’t see it.”  And in the 65 years since it was made, viewers have largely followed that advice.  It’s not terrible, but it doesn’t really come to life.  This is not the best work for either the fledgling director or the writer.  At the time this was made, Kazan was a talented stage director and nobody knew then that he would turn out to be a great screen director.  He didn’t really demonstrate that with this film, and he went back to the stage for a few years. 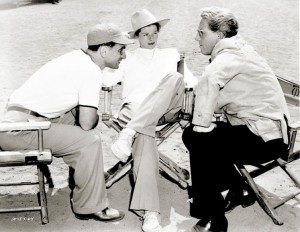 Director Elia Kazan confers with Hepburn and Tracy behind the scenes.

During filming, director Kazan complained that Kate kept changing her character’s outfit in every scene.  Costume designer Walter Plunkett, who had been dressing Hepburn and her characters since 1933, explained, “It’s because of Spence.  He’s the love of her life, and she wants him to think she’s prettier than any other girl.”  Kazan explained, “I mean in the movie.”   Plunkett responded, “The movie!  I mean in real life.  That’s what matters.”  We don’t see that chemistry in this film, though.

For Harry Carey, this was the next-to-last of his movies, made just before Red River was released.  He carries kind of a folksy authenticity, as he always did, in playing Doc Reid.  A long-time giant of the screen, he had made 132 westerns, many of which from the silent era are now lost.  Melvyn Douglas is good in a role that calls for him to be both self-righteous (about the homesteaders) and a bit slimy in trying to make off with another man’s wife.  He’s hard to like, but it’s believable that there could be a character like that.  Edgar Buchanan is excellent as the cook-cum-nursemaid Jeff.  Both Ray Teal and Hank Worden have small, uncredited roles in this, too.  Robert Walker would play a similar role again in 1951’s Vengeance Valley, with Burt Lancaster as the good brother to Walker’s wild, amoral brother. 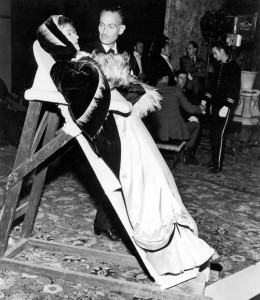 Brice Chamberlain: “Why do women insist on loving men for what they want them to be instead of what they are?”  [Seems like this ought to be a line for Jim Brewton, but he never says anything this vulnerable, so Chamberlain says it for him.]

For Tracy in better westerns, check him out in Northwest Passage (1940, set during the French and Indian War of the 1750s) and Bad Day at Black Rock (1955, set in a modern west).  Hepburn made no other westerns for another 25 years until she made Rooster Cogburn with John Wayne, a sequel of sorts to True Gritor and/or a remake of The African Queen, depending on how you want to look at it. 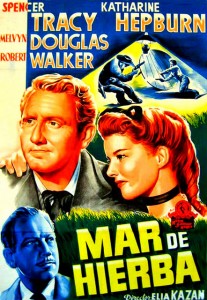 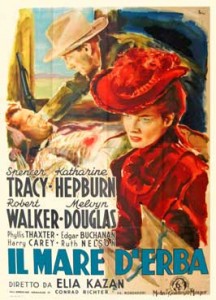 Watching this movie, the cinematography is occasionally dazzling, with small wagons against immense, brightly lit rock formations.  Even the shots of the sea of grass are persuasive.  This is one of those that, if made just a few years later, would have been shot in color and in widescreen format, which would have made it better.   Although Harry Spradling was a superb cinematographer, nominated thirteen times for Academy Awards, he’s known much more for shooting large scale musicals, including My Fair Lady, Hello Dolly and Funny Girl, as well as A Streetcar Named Desire and many others.

Music is by Hubert Stodhart.   Excellently shot in black and white, at 123 minutes.

For multi-generational ranch family melodramas from about the same time, see The Furies (with Walter Huston and Barbara Stanwyck) and Duel in the Sun (Joseph Cotten, Gregory Peck and Jennifer Jones).  For another spoiled son/brother gunman named Brock, see Forty Guns.