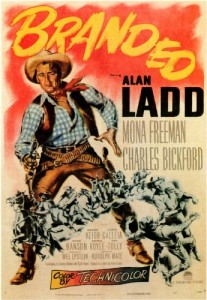 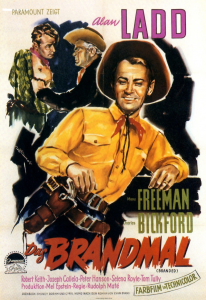 Alan Ladd made this one just before he revived his career by playing Shane, perhaps his biggest role ever and certainly his best western.  He had been in movies for almost ten years at this point and was not quite as big a star as he had been after his breakthrough roles in This Gun for Hire (1942) and The Blue Dahlia (1946).  After Whispering Smith (1948), he moved more into westerns and made several good ones, including this.

When we first see Choya (Ladd’s character), he is besieged by the men of a town where he has just killed someone who drew first on him.  He wears two guns in the kind of fancy rig often seen in the 1950s, which mark him as a gunman, and he escapes from his predicament resourcefully.  He is followed, however, by T. Jefferson Leffingwell (Robert Keith) and his partner Tattoo, who want to make him a business proposition.  Leffingwell knows of a south Texas ranching family whose son Richard was kidnapped 25 years previously.  The son had a birthmark on his left shoulder, and Leffingwell proposes that Tattoo give Choya the birthmark.  He will then pretend to be Richard Lavery to win over the ranching family and take over their ranch.  The story’s title refers to him after the tattoo. 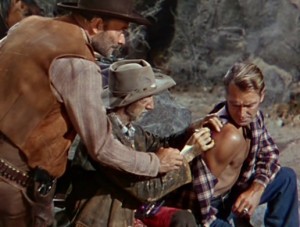 Choya (Alan Ladd) receives the tattoo that leads to the title.

Choya (Cholla?) is Spanish for a type of cactus, and Choya shares the plant’s prickliness.  That’s the only name he has, along with a spotted and murky past, and he agrees to Leffingwell’s plan, with certain provisos.  After receiving the tattoo, he heads for for the Laverys’ Bar O Ranch and starts by getting a job there.  Leffingwell, meanwhile, has killed Tattoo so as not to share the gains from this con, and has been told by Choya to lay low.

[Spoilers follow from this point.]  Choya gets a job on the ranch, despite suspicious foreman Ransome (Tom Tully), who doesn’t like him.  While fighting with the owner (Charles Bickford), his tattoo/supposed birthmark is spotted.  The family accepts him, including daughter Ruth (Mona Freeman), and he plays along, slowly and apparently reluctantly.  Leffingwell shows up to press the matter.  Choya/Richard is trusted to head a cattle drive to El Paso with Ruth, and he has second thoughts about this con.  Finally he sells the cattle for more than $180,000 and makes sure that it goes back to the family.  He has it out with Leffingwell, discovering that Leffingwell was the baby’s kidnapper and that Mexican bandit chieftain Mateo Rubriz (Joseph Calleia) has raised the child as his own son Antonio. 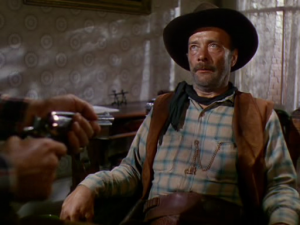 Choya negotiates with the sleazy Leffingwell (Robert Keith) from a position of strength.

After warning Leffingwell not to set foot in Texas again, Choya heads south over the Rio Grande toward the mountain retreat of Rubriz.  Somehow he charms Rubriz and, while Rubriz is called away, manages to make off with Rubriz’s son Antonio (Peter Hansen), the Laverys’ real long-lost son, who doesn’t really want to go to Texas.  Life is fine for him where he is.

Rubriz was called away to see Leffingwell (we knew he’d show up again), who tells him what Choya’s up to, and Rubriz and his men give chase.  It’s a long way to the Rio Grande, and Choya doesn’t know the shortest paths.  Antonio was wounded in their getaway, and they are trapped in a cave while Rubriz’s men unknowingly camp below.  Choya has taken good enough care of Antonio, and told him enough stories of the Laverys, that Antonio is beginning to trust him and helps him steal horses to sprint for the river, stampeding the rest.  As Leffingwell takes a bead on Choya to shoot him down with a Winchester, the stampeding horses push him off a cliff.  Once on the other side of the river, Antonio faints from his wound and Choya passes out from exhaustion.  They are found there by Lavery and his foreman Ransome. 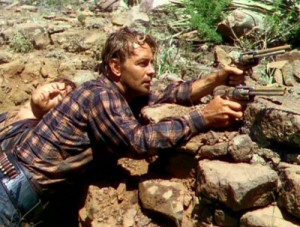 Having barely made it back across the Rio Grande, Choya (Alan Ladd, with Peter Hansen) prepares to shoot it out.

As Antonio wakes in a bed on the Lavery ranch, Choya explains things to him.  But Rubriz and his bandit band have found him, and Rubriz plans to kill both Choya and Antonio, whom he views as a traitor.  Choya manages to talk him around, though, and it looks like Antonio will have a family on both sides of the border.  As Choya makes yet another escape, he is caught by Ruth, and it looks like this time he will not get away so easily.

Based on a story by Max Brand, the outline of this plot seems a bit contrived.  But it works in part because Ladd manages to be convincing (if short) as the irascible Choya.  The supporting cast is strong, too, especially Robert Keith as the delightfully loathsome and unprincipled Leffingwell, Joseph Calleia as the bandit chieftain and family man Rubriz, and Peter Hansen as Antonio. Calleia, who was of Maltese origin, often played heavies and Mexicans, but he was particularly good when the role called for some ambiguity, as his does here.  He could give his roles an enigmatic humanity, when in other hands they might just be stereotypes.  Charles Bickford, said to be as irascible as Choya and hard to work with on other film sets (see The Big Country, for example), is fine here, as he was in Four Faces West with Calleia a couple of years earlier.  Mona Freeman always played younger than she was in movies, and doesn’t have many nuances to her performance, but she’s fine here. 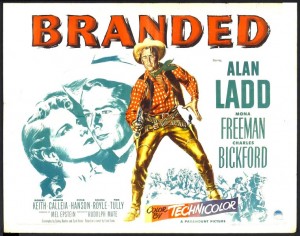 This isn’t really what his two-gun rig looks like.

Shot on location in Arizona and southern Utah, with Charles Lang doing the cinematography in color in “academy aspect,” full-screen.  Not terribly long, at 104 minutes, it nevertheless moves at what sometimes seems a leisurely pace.  The movie was recently released on DVD by Warner Archive (Sept. 2013).