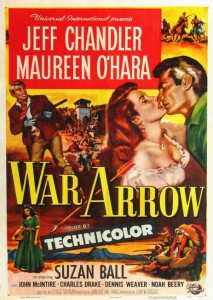 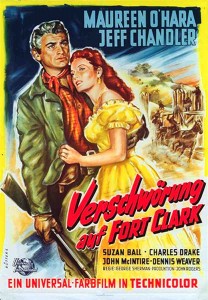 Major Howell Brady (Jeff Chandler) is a war hero from the Civil War, now trying to recruit Seminoles in Texas to fight Kiowas led by Satanta (Jay Silverheels) and a mysterious white man.  When he arrives at his new post, Fort Clark, he finds that his new superior, Col. Jackson Meade (John McIntire), is dubious about his enterprise.  And he also finds a romantic interest in recent widow Elaine Corwin (Maureen O’Hara).  Meade seems to be interested in her, too.

Brady succeeds in recruiting the reluctant Seminoles led by Maygro (Henry Brandon, the German actor who played Scar in The Searchers and Comanche chief Quanah Parker in Two Rode Together), but there are undercurrents.  Meade is not supportive of the effort, even when it turns out to be quite successful.  And Maygro’s daughter Avis (Suzan Ball) has adopted white values and is interested in Brady.  The mysterious white man helping the Kiowas turns out to be the not-so-dead Corwin (James Bannon).  The conflict between Brady and Meade over strategy and use of the Seminoles leads to Brady being tossed in the brig. 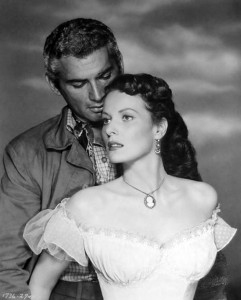 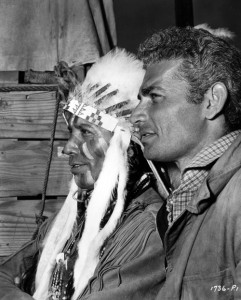 He nevertheless manages to save the post from destruction, and Corwin and Satanta are killed.  Meade is wounded and, of course, comes to a new appreciation of Brady—as does the now-widowed Corwin.  Avis turns her attentions to Seminole warrior Pico (Dennis Weaver).

The Corwin character is not very fleshed out, and the end, with Meade’s immediate conversion, doesn’t seem entirely believable.  The final battle at the post is not well done.  But this is fairly watchable anyway.  Shot in color by William Daniels (The Far Country, Night Passage), at only 78 minutes. 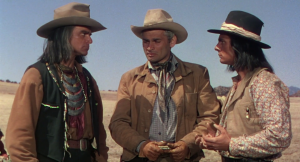 For another movie of Jeff Chandler commanding cavalry out west and fighting Kiowas, see Two Flags West.  In that one, he plays the unreasonable commander rather than the fighting hero.  But it’s a good movie.  Chandler and Silverheels had played Cochise and Geronimo, respectively, in Broken Arrow, another good western, which had made Chandler’s reputation.  Dennis Weaver shows up again as an Indian, this time a Navajo, the same year (1953) in Column South, an Audie Murphy movie.