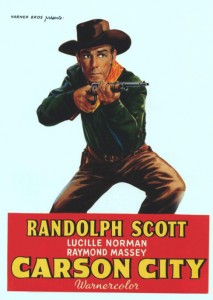 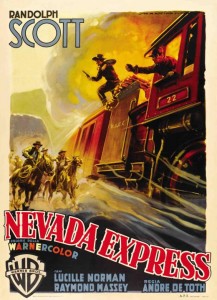 Despite the name, this is not a mining western but a railroading western.  (Carson City and Virginia City were in the heart of the fabled Comstock Lode silver-mining country.)  It is not the very best work in the genre by one-eyed Hungarian director Andre de Toth (see Ramrod and Day of the Outlaw) or by star Randolph Scott during the early 1950s (see maybe Hangman’s Knot), but it is an above-average western with a reputable star and director.

Silent Jeff Kincaid (a not-so-silent Randolph Scott) has developed a reputation as a railroad construction engineer able to deal with tough terrain.  San Francisco banker William Sharon (Larry Keating) wants to build a railroad line in the mountains between between Virginia City and Carson City on the Nevada side of the Sierra Nevada range.  Kincaid knows the territory well because he grew up there.  His half brother Alan is still there, although Kincaid hasn’t been back in a dozen years or more. 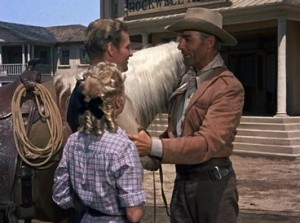 As Kincaid rides back into town, he is greeted by Susan Mitchell (Lucille Norman), daughter of the local newspaper publisher.   She was only thirteen when Jeff left town, but she had a crush on him.  Working with the Mitchells is brother Alan Kincaid (Richard Webb), who has a relationship of sorts with Susan.  Banker Sharon wants the new line to avoid bandits who’ve been robbing stages, but newspaperman Mitchell and most of the rest of the town like it the way it is and don’t want the riotous changes railroaders will bring.

The bandits are led by mine owner Big Jack Davis (Raymond Massey), whose mine is played out, and by his henchman Squires (James Millican).  They try to sabotage the new line at every turn, smashing up a wagon load of equipment and killing the driver, then engineering a landslide that kills three others and traps Kincaid and several others in a blocked tunnel.  They are rescued by a joint town-railroad effort that punches through the tunnel from the other side.  Davis kills Susan’s father when he thinks he knows too much.  Some suspect Kincaid of having had a hand in Mitchell’s murder to silence opposition, and Susan isn’t sure.  Alan becomes hostile because he thinks Susan is becoming too fond of Jeff. 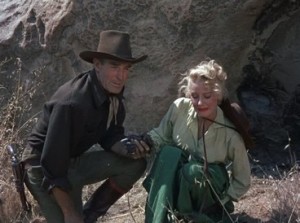 On the line’s opening run, there is a big celebration, but Davis plans to rob the train as it returns from Virginia City to Carson City.  Jeff gets wind of these plans and rides with miners to the site of the robbery.  As Davis and Squires are getting away with the gold bullion, Davis shoots Squires in the back and heads into the rocks.  In an extended shootout, Alan is killed but Jeff gets Davis.  In the end, it looks like Jeff gets Susan and is about to be talked into taking on the building of another tricky line of railroad.

Most of Randolph Scott’s westerns in the early 1950s were made for Columbia and Warner Bros.  They tended to be made with comparatively low budgets, and this showed up principally in the writing, the hiring of the director and the supporting players.  Here the director is better than in most, but the weaknesses are in the supporting cast.  Raymond Massey could usually do a pretty juicy villain pretending to respectability (see Dallas, for example), and he does it well here.  But Richard Webb, playing blond brother Alan, is not very memorable, nor is Warners starlet Lucille Norman—another in a string of forgettable romantic interests in Scott westerns.  The assumption seems to be that if Jeff Kincaid left Carson City twelve years ago, maybe he’s about 35 years old; but Randolph Scott, although he is aging very well, is closer to 55.  That’s about 30 years older than Lucille Norman.  During the shootout in the rocks, the figure in black leaping around the rocks with great agility is clearly not a Randolph Scott in his mid-fifties.  One co-star worth looking for:  Scott’s beautiful dark palomino Stardust. 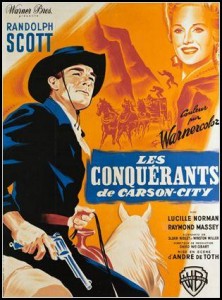 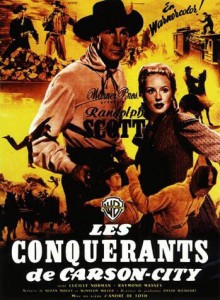 With those grumbles, this film moves right along, and if you’re a Randolph Scott fan, it’s worth watching.  This is the second of six Randolph Scott westerns directed by Andre de Toth.  After two or three more years and four more westerns, De Toth would tire of the restrictions of low budgets and other frustrations that came with Scott westerns, and would decide to make no more of them.  But this is a pretty good one.  According to Robert Knott, author of The Films of Randolph Scott, it is “the absolute best Warner Bros. Scott western of the period.”  (Hangman’s Knot was a Columbia production.)  In color, at 86 minutes.