Billy the Kid on Film

It is hard to explain the continuing notoriety and charisma, even popularity, of youthful New Mexico outlaw William Bonney—Billy the Kid.  Young, wild and illiterate, he was only 21 when he was killed by Sheriff Pat Garrett in a darkened room; he was said to have killed a man for each year of his life, although the real total seems likely to be less than that.  Jesse James had an extended period of successful outlawry and a genius for public relations in his letters to Kansas City and other Missouri newspapers.  Butch Cassidy had a magnetic personality and a modern-day Robin Hood streak, and was never known actually to shoot anyone before heading for South America.  Billy, caught up in New Mexico’s Lincoln County War, was a killer.  One sees various photographs on the internet said to be of Billy, but there is only one that is known to be an authentic image. 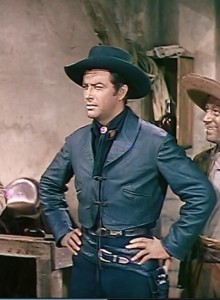 The authentic scruffy-looking William Bonney (Billy the Kid); and a much smoother (and older) leather-clad cinematic Billy–Robert Taylor in 1941.

The Kid showed up in movies a little later than Jesse James did, beginning around 1930, when he had been dead almost 50 years.  He was especially prominent in the early 1940s, in a series of B movies with Bob Steele and Buster Crabbe.  Billy has been played by such cowboy stars as Johnny Mack Brown, Roy Rogers, Bob Steele and Audie Murphy, as well as bigger mainstream stars like Robert Taylor and Paul Newman.  Like many prominent western figures, Billy has been subjected to revisionist treatment (see Dirty Little Billy, 1972) in the movies.  The most notorious movie about Billy may have been Howard Hughes’ The Outlaw, in which the most prominent character was not Billy, but fictitious romantic interest Rio, played by Jane Russell.  Certainly Russell figured more prominently on the posters. Billy had a cinematic resurgence about 25 years ago, in the two Young Guns movies, in which he was played by Emilio Estevez.

There are a number of biographies and other works on the historical Billy. For historical reliability, you might start with Robert Utley’s Billy the Kid: A Short and Violent Life (1991) and High Noon in Lincoln: Violence on the Western Frontier (1990).  For readability, try Billy the Kid: The Endless Ride, by Michael Wallis (2007). 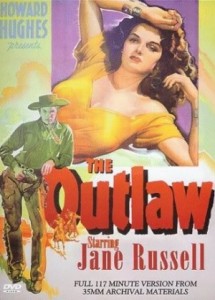 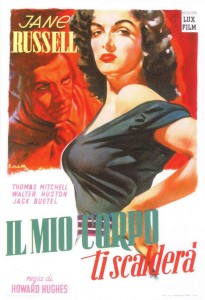 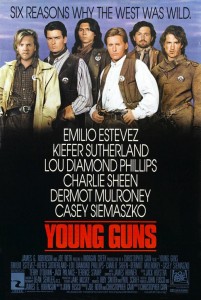 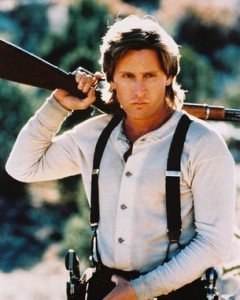 Billy the Kid for a new generation:  Young Guns, 1988; and Emilio Estevez as Billy.