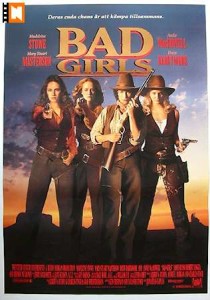 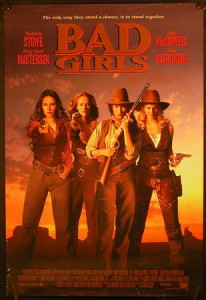 This is a modern feminist fantasy set in the southwest in 1891, with a few anachronistic touches.  Despite what one might expect from that description, it is (a) directed by a male and (b) fairly successful as a western.

The four women of the title are “bad” because they meet while working as prostitutes in a saloon in Echo City, Colorado.  When a socially-prominent customer referred to as “the Colonel” becomes abusive to Anita Crown (Mary Stuart Masterson), Cody Zamora (Madeleine Stowe, who may have been the most beautiful woman in the movies in the early 1990s) gives him a warning, and, when he pulls a gun and starts shooting, she coolly shoots him.  She is about to be lynched for the shooting, when her three compatriots, Anita, Lilly Laronette (Drew Barrymore) and Eileen Spenser (Andie MacDowell), rescue her and they all ride out of town.  The Colonel’s widow hires Pinkertons to go after them. 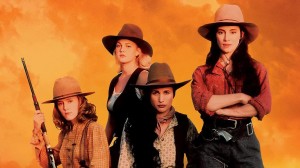 Anita, who is a young widow, still has her husband’s homestead claim in Oregon, where she proposes to start a sawmill.  Cody has more than $12,000 in savings to help start the venture.  They head for Agua Dulce, a town not far from the Rio Grande in south Texas, where Cody’s money is in a local bank.  While trying to withdraw her money, Cody encounters a bank robbery being conducted by Kid Jarrett (James Russo) and his gang, with whom she has history.  The Kid makes off with her money, too, which she takes as an invitation to visit.  Eileen, who is not good with horses, is captured.  While in jail, she strikes up a conversation with modest rancher William Tucker (James LeGros), who eventually allows her to escape.

Cody heads south of the border to the Jarrett gang’s retreat.  The Kid’s father Frank (Robert Loggia), once head of the gang, had taken Cody in when she was fourteen.  Although he says he’ll give her back her money, the Kid beats her badly for leaving them years ago.  She is found barely able to ride by Joshua McCoy (Dermot Mulroney), who smuggles her back into Agua Dulce and gets her injuries tended.  He has been hunting the Jarrett gang because Frank Jarrett killed his father, stole their claim and caused his mother to fall into prostitution and an early death. 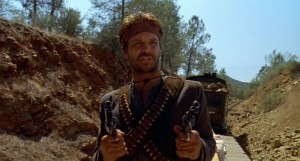 Cody knows that Kid Jarrett plans to hit a train to get gold and a gatling gun.  She, the three other girls and McCoy and Tucker, using dynamite, instead interrupt the robbery and take the gun and Frank Jarrett, while the Kid makes off with Lily.  Although they plan to trade Frank for Lily, Frank taunts McCoy into killing him, and Cody forces McCoy to leave.  He goes back to the Jarretts’ retreat and kills several of them, helping Lilly escape.

When Cody, Anita, Lilly and Eileen bring the gatling gun to trade for Cody’s money, the Kid agrees but kills McCoy, precipitating a general gunfight.  The girls are surprisingly good with guns.  Finally it comes down to the Kid against Cody, and she wins.  They bury McCoy, Eileen stays with William, and Cody, Anita and Lilly head off for the Klondike.  They ride off into the sunset as the now-bumbling Pinkertons question a rancher in the foreground. 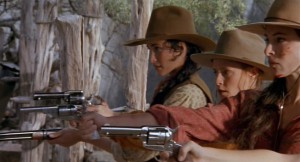 With a large cast like this, and only 99 minutes, some elements of character and plot are bound to be underdeveloped.  Lilly, in particular, although there is the implication of a lesbian relationship with Eileen, seems not fleshed out enough.  Andie MacDowell never is very convincing with guns.  The real women of the west, obviously, were not this glamorous.  The four female leads are good in their roles generally, and, surprisingly enough, so are three of the male characters:  Dermot Mulroney as McCoy, James LeGros as the low-key William Tucker, and James Russo as Kid Jarrett, who nevertheless seems a bit over the top in his loathsomeness.  (Apparently being a bad guy in westerns was a good fit.  See him also as a talkative white slaver in Broken Trail, and as a corrupt marshal in Open Range.)  The excellent music is by Jerry Goldsmith and occasionally elegant cinematography by Ralf Bode.  The “extended cut” of the movie available on DVD is not much longer than the theatrical release version (100-104 minutes), but is said to include an additional nude shot or two.  Both versions are rated R.

Tamra Davis started as director of this film, with a script written by Yolande Turner and Becky Johnston.  A few weeks into filming, the production company became unhappy with the direction the film was taking.  They shut down production, replaced Davis with Jonathan Kaplan, had the script completely rewritten and sent the four main actresses off to “cowboy camp” to learn how to shoot, rope and ride.  Drew Barrymore, in particular, was unhappy with the sacking of Davis.  The new writing is nothing remarkable.  The set used for Kid Jarrett’s hideout was built for Alamo: The Price of Freedom (1988).  Kid Jarrett’s room is the Alamo set interior, designed by Roger Ragland.  The town is on location in Alamo Village, Bracketville, Texas, designed by Alfred Ybarra for John Wayne’s production of The Alamo (1960). 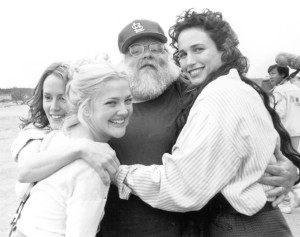 Three of the stars (Masterson, Barrymore and MacDowell) with director Kaplan.

So what’s anachronistic here?  The women often wear pants and attire of other sorts that weren’t worn in the 1890s, at least by women in public.  The use of “Cody” as a first name is fairly recent, and even then is almost always male.  The Klondike references are about seven years too early in 1891.  The women’s social attitudes are obviously more 1990s than 1890s.  For earlier westerns focusing on women, see William Wellman’s Westward the Women (1951) and George Marshall’s Guns of Fort Petticoat (1957), both of which feature Hope Emerson.  For Madeleine Stowe in another western, see her in Last of the Mohicans (1992).  For another variation on the female buddy western, see Salma Hayek and Penelope Cruz in Bandidas (2003).