The fact that The Virginian is one of the oldest of western stories reminds us of how recent the history of the west is.  Owen Wister’s 1902 novel was the first western bestseller, and it has been made as a movie several times, most recently in 2014.  The best one is generally thought to be the 1929 early sound version with Gary Cooper as the Virginian, which can be very difficult to find now, since it has never been made available on DVD.  This 2000 made-for-television version is at least the second best on film; it may be the best. 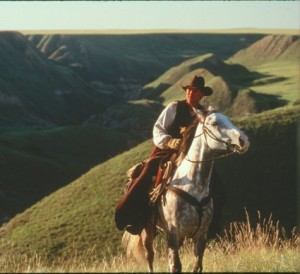 Like some of the older western stories that have been remade multiple times from the early days of movies, the story in many of the versions of The Virginian has not aged well.  Modern viewers may have trouble understanding the motivations of the characters and sometimes even the dialogue.  This effort, directed by its star, Bill Pullman, is a mostly successful attempt to update the characters in terms of making them intelligible to modern viewers while retaining the flavor of a bygone era in the dialogue and interactions of the characters.  It is one of the classic western tales: an easterner goes west, leaves civilization and must learn new ways.  In this case, the easterner is schoolmarm Molly Stark (Diane Lane) from Bennington, Vermont, who comes to Medicine Bow in Wyoming Territory in 1885.

Arriving in Medicine Bow, Molly is taken to the remote ranch of Judge Henry (Harris Yulin in long hair).  When the wagon she’s riding in has problems, she’s rescued by the Virginian (Bill Pullman), one of Judge Henry’s riders.  He appears to be taken with her and is more direct about his interest than a well-brought-up easterner would be.  Judge Henry and other ranchers are having trouble with rustlers who seem to have some connection with rancher Sam Balaam (Dennis Weaver).  When the Judge promotes the Virginian to be his foreman, Trampas (Colm Feore) quits rather than work for the Virginian, and the Virginian’s good friend Steve (John Savage) unexpectedly leaves as well.  While rounding up horses, the badly outnumbered Virginian has to shoot it out with several rustlers and is gravely wounded.  He lies bleeding on the ground, where Molly eventually finds him by following his horse Monty, and she nurses him back to health.  They grow closer in the process. 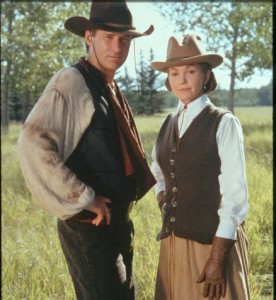 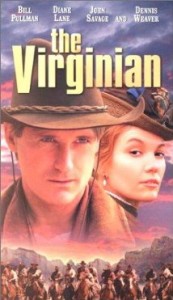 As soon as the Virginian can ride, he is called upon to lead a band of riders against the rustlers.  They capture two of them, one of whom is the Virginian’s friend Steve and, according to the code of their time and place, must hang the two.  Molly is horrified to learn of the Virginian’s role in this, but they talk it out and continue with their plans to marry.  On the day of the wedding, a rider (James Drury, who played the Virginian in the 1960s television series) delivers a message that Trampas has killed two federal officers who were trying to deal with the rustlers and is now waiting for the Virginian in the Medicine Bow saloon.  Molly insists that the Virginian not go, but a man’s gotta do … well, you know.  As later stories would put it (John Wayne in Stagecoach, Randolph Scott in The Tall T), some things a man can’t ride around.

The Virginian rides into Medicine Bow, and we can see men, presumably with guns, on top of two or three buildings.  Leaving his own men outside, he walks straight in, leaving it up to Trampas.  Facing off, they agree to have the piano player play the Battle Hymn of the Republic and both draw when he comes to the phrase “His truth is marching on.”  The result should surprise no one, but it’s effective.  The Virginian grabs Sam Balaam, who’s behind it all, and forces him to call off the men stationed on the buildings.  The Judge’s wife tells the Virginian that Molly has gone back to Vermont, not on to Oregon as she has threatened for most of the movie.  In the closing scene, the Virginian, hat and all, appears in Bennington, Vermont, and there is an appropriate, if belated, rapprochement between him and Molly.  Presumably they live happily ever after.  In Wyoming Territory.  (Note that in the final scene, just before the credits, Molly appears to be riding the Virginian’s horse Monty, while he rides another horse, and we know how he feels about Monty.  So his commitment to Molly must be pretty high, too.) 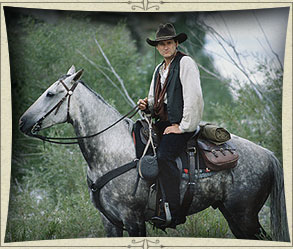 Bill Pullman is good with the Virginian’s little hesitances in speech and old-fashioned dialogue.  Unlike other versions of the story, he is not already Judge Henry’s foreman, previously having come to be held in high regard, and his experiences with a gun are limited.  Diane Lane is decent, if occasionally a little stiff, as Molly Stark; but she’s better than the wooden Barbara Britton, who played Molly in the 1946 version with Joel McCrea.  Colm Feore makes a little more intelligible Trampas’ antipathy for the Virginian.  Partly it’s pride and personal dislike of the Virginian, and partly it’s goading from Sam Balaam.  John Savage is not as warm and friendly as Steve is usually portrayed. Harris Yulin is remote and not terribly avuncular as Judge Henry.  Dennis Weaver does well as the weaselly Sam Balaam.

The production design is good, particularly Molly Stark’s riding hat.  While the film does not always flow entirely smoothly, there are a lot of good small touches, too.  The saloon in Medicine Bow has a bobcat and a peregrine falcon as live parts of the decor.  As the Virginian strides toward the saloon with his life in turmoil, his future in doubt and his relationship with Molly perhaps gone forever, he nevertheless notes Balaam’s men with rifles on the roofs of surrounding buildings.  When he gets closer, he thinks he sees Steve around one corner nod and smile in approval for what he’s doing, although he knows Steve is dead.  The use of the Battle Hymn of the Republic as the device for timing the draw works well.

As has become common for westerns over the last couple of decades, this was filmed in Alberta, with good cinematography and frequent shots from above, giving a flavor of the remoteness and wildness of the land.  Since Molly Stark’s school house and cabin are remote even from from Judge Henry’s ranch, it’s surprising that she might not have found herself to be in danger in such a wild and lawless country.  In all, this is worth watching, a worthy update of a western story that some might consider old-fashioned.  It even has a high degree of re-watchability.  Perhaps we can hope for equally worthy updates of Whispering Smith or The Spoilers.  In color, at 95 minutes. 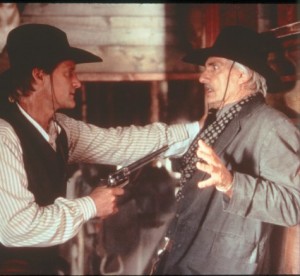 For Bill Pullman in another western, he has a brief role as Ed Masterson (Bat’s brother) in Wyatt Earp.  Diane Lane, of course, had a prominent role in Lonesome Dove.  Gary Farmer, who plays the heavy cowboy Buster, was Johnny Depp’s Indian guide Nobody in Dead Man.  For another decent TNT production of an older western story, see Ed Harris and Amy Madigan in Zane Grey’s story Riders of the Purple Sage.