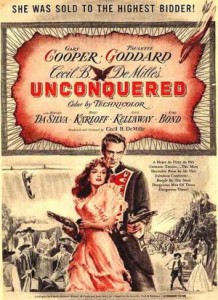 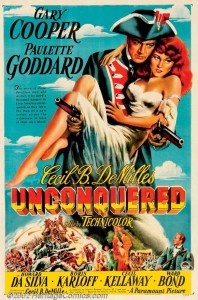 Gary Cooper had made a reputation in a variety of film genres in the 1920s and 1930s, including upscale westerns.  By the 1940s he was among the biggest stars in Hollywood, and he only made four westerns during the decade:  The Westerner and North West Mounted Police in 1940, Along Came Jones in 1945 and Unconquered in 1947.  North West Mounted Police and Unconquered were not the low-budget productions typical of the genre then.  They were directed by Cecil B. DeMille, and Unconquered was DeMille’s usual self-conscious epic, made with a large budget, in color and with a long playing time of 146 minutes.

Unconquered begins in 1763, the time of Pontiac’s Uprising in the northwest frontier of Britain’s American colonies, more than a decade before the Revolution.  Comely young English woman Abigail Hale (Paulette Goddard) is sentenced to death or transportation to the colonies in indentured servitude for helping her dying brother resist impressment into the Royal Navy.  She chooses transportation.  As the ship carrying her and other convicts nears the colonies, Abby attracts the interest of smooth but nefarious Indian trader Martin Garth (Howard Da Silva), who bullies the slave trader on the ship into auctioning her prematurely.  Unexpectedly, she is bought by Virginia militia Capt. Christopher Holden (Gary Cooper, not young at 46), who distrusts and wants to frustrate Garth.  Holden arranges for her to receive her freedom when he leaves the ship the next day, since he’s meeting his fiancée. 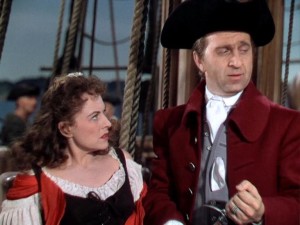 Holden’s plans go astray.  His fiancée Diana (Virginia Grey) reveals that she has married Holden’s brother, and Garth bullies the slave trader into giving him Abby’s freedom papers and reselling her to his henchman Bone (Mike Mazurki).  Holden ends up inland at the Peaketown Fair, where he meets his blacksmith friend John Fraser (Ward Bond), sees Abby again, meets with Col. George Washington (Richard Gaines) and Sir William Johnson, the King’s premier Indian agent.  They hear of Pontiac’s plans to inflame the northwestern tribes (western Senecas, Shawnees, Ottawas) in the western Pennsylvania, Ohio and Michigan areas.  Holden agrees to carry wampum belts inviting the chiefs to a meeting, although he knows Garth’s Indian allies will be trying to kill him.  They do get his two scout comrades, but Holden makes it to Fort Pitt in western Pennsylvania.

There he finds the garrison is both depleted and reluctant to believe him.  He also finds Abby working in Bone’s tavern, and he abducts her to use as bait for Garth.  At a ball, Holden manages to challenge Garth to a duel, but Garth and Bone make off with Abby to the camp of Guyasuta (Boris Karloff), chief of the western Senecas and Garth’s father-in-law.  They leave Abby with Guyasuta, but his warriors and women begin to torture her.  Holden finds her and uses apparent magic (gunpowder explosions, a compass) get her released.  Pursued by Guyasuta’s warriors, they head downriver in a canoe, shooting rapids and going over a waterfall where Holden arranges a wildly improbable grab of a conveniently overhanging tree branch just in time. 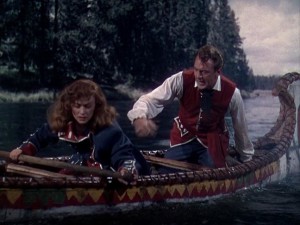 As they make their way to the fort at Venango, Holden and Abby find evidence of Indian raids and slaughtered settlers.  At Venango, evidence suggests that the fort surrendered when given promises of mercy but the inhabitants were slaughtered by the Indians anyway.  However, the garrison at Fort Pitt refuses to believe them, and Holden is court-martialed and imprisoned.  Abby promises Garth she’ll stay with him if he’ll arrange for Holden’s escape.  He does, but also arranges for sharpshooters to ambush Holden during the escape.  Garth’s spurned Seneca wife Hannah (Katherine DeMille, Cecil’s daughter) re-directs Holden but is shot herself.

Holden makes it to Col Henry Bouquet at Bushy Run looking for reinforcements for Fort Pitt, but finds Bouquet’s ranks depleted, too.  He arranges to borrow Bouquet’s drummers and pipers and a hundred dead men, using them to feign a relief column to chase off the Senecas now besieging Fort Pitt just as Fort Pitt is on the verge of surrendering as Venango did.  As Garth and Bone try to escape with Abby, Holden catches them in a stable and finally shoots it out with Garth. 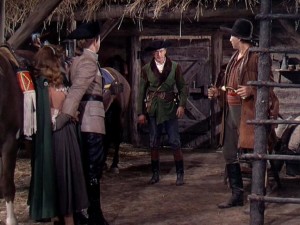 Holden (Gary Cooper) has it out with Garth (Howard Da Silva), as Bone (Mike Mazurki) and Abby (Paulette Goddard) look on.

Although this is watchable, it has a few elements that don’t work well with modern audiences.  The color cinematography by Ray Rennahan is excellent.  The heavy-handed introductory narration and the dialogue can be clunky, and the Indians are mostly evil stereotypes, as one might guess from the casting of Karloff.  Some critics at the time referred to this as “The Perils of Paulette,” because of the way she seems to move from crisis to crisis.  The production design is good; DeMille gets the uniforms, forts and firearms right.  Cooper and Goddard are both a little old for their roles, but they work well enough.  Goddard had several fights with DeMille during filming, and he would never cast her again in one of his movies.  Her accent in this film is decidedly not English.  This was also the last of Cooper’s four films with DeMille.  Howard Da Silva makes an excellent villain.  In his memoirs, DeMille said that he was not completely satisfied with the ending and thought it needed to be stronger.

By this time, Cecil B. DeMille had been making westerns for more than thirty years, since The Squaw Man in 1914, the first feature-length movie of any kind.  This was his last western, but not his best.  Both The Plainsman (1936) and Union Pacific (1941) are watched more than North West Mounted Police (1940) and this.  Unconquered was based on Neil Swanson’s novel The Judas Tree; he also wrote Allegheny Uprising, another colonial-period western starring John Wayne and Clair Trevor.  The river scenes were shot on the Snake River in Idaho, and look very good.  Iron Eyes Cody is both in the cast and listed as an Indian language consultant, but we now know that Cody, despite making a career as a cinematic, advertising and television Indian, was in fact the son of Sicilian immigrants. 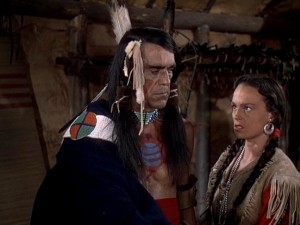 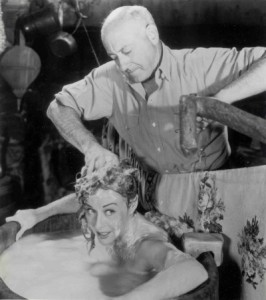 Although Pontiac never actually shows up in this film, the traditional historical work on his wars is Francis Parkman’s The Conspiracy of Pontiac, first published in 1851 but still readable.  Guyasuta was not the unrelievedly evil character depicted here although he consistently opposed the expansion of American settlement in the Ohio country.  For a recent biography see Brady Crytzer’s Guyasuta and the Fall of Indian America (2013), which not only describes his role in Braddock’s defeat, Pontiac’s uprising and the Battle of Bushy Run as mentioned in this film, but takes him all the way up through the American Revolution and the Battle of Oriskany (see Drums Along the Mohawk) to his participation in the Indian defeat at the Battle of Fallen Timbers in 1794 by Mad Anthony Wayne.  For a description of the situation on the American frontier in 1763, see Colin Callaway’s The Scratch of a Pen: 1763 and the Transformation of North America (2006).