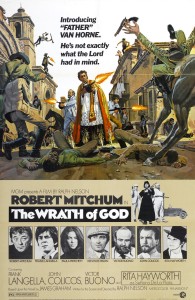 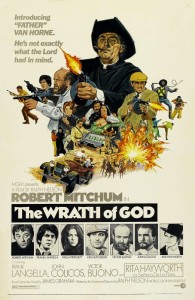 Directed by Ralph Nelson, like Duel at Diablo and Soldier Blue; some think this is a parody, but it probably isn’t.  In 1922 in an unnamed central American country (it might even be in Mexico), Tomas de la Plata (a young Frank Langella) and his personal army of gunmen (led by Gregory Sierra) have taken over a town and the surrounding area for the last couple of years.  De la Plata has a strong anti-clerical streak, and a record of killing priests.  The authorities coerce Jennings, a British gunrunner (Victor Buono), Emmet Keogh, an IRA gunman (Ken Hutchison), and Van Horne, a bank-robbing, corrupt priest (Robert Mitchum) into an assassination attempt on de la Plata.

There follows kind of a muddled plot as the three, especially Van Horne, help the townspeople and form a relationship with each other, while the IRA man becomes attached romantically to an unlikely mute Indian princess (Paula Pritchett).  Van Horne takes up priestly activities, but it’s unclear how real or strong his conversion is.  Jennings and maybe Van Horne are killed in the assassination attempt, as are De la Plata and most of his men.  This was 52-year-old Rita Hayworth’s last movie (she plays De la Plata’s mother), and she had trouble remembering her lines because she was already beginning to show evidence of Alzheimer’s disease.  Langella and Mitchum took to abducting her to get her to the set on time.  Written by Jack Higgins, filmed around Cuernavaca, Mexico, and the old silver-mining ghost town of La Luz.  In color, at 111 minutes.  Art on the posters is by Frank McCarthy.

De la Plata (Frank Langella) has his suspicions about Father Van Horne (Robert Mitchum), as well as a hatred of all priests.

Father Oliver Van Horne: “We three faced the firing squad together. Everything else is just borrowed time.”
Jennings: “God protects fools and drunks, not idiots.”

There’s a certain amount of 1970s-style iconoclasm about the film, with more humor and action than was usual.  The plot leaves a number of unanswered questions, but film critic Roger Ebert found that they didn’t hurt the finished cinematic product.  Mitchum played questionable or corrupt priests with guns in several movies; see The Night of the Hunter and Five Card Stud in addition to this.  It’s not entirely clear here whether he is a priest good with guns and booze, or a bank-robber good at playing a priest.  Mitchum was good in westerns generally, but this isn’t one of his best.  Rita Hayworth only made a couple of westerns, but she was better (and almost fifteen years younger) in They Came to Cordura.  Despite being hailed by Ebert as the “American Sophia Loren,” this was Pritchett’s last movie and only one of any note.  It was for Ken Hutchison as well.