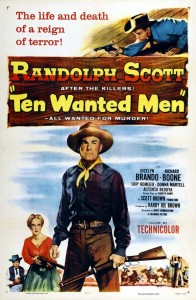 Adam Stewart [seeing Campbell standing over a dead Grinnel]:  “I thought Grinnel was your friend?”
Wick Campbell:  “That’s what makes it so sad.  I’ve known him for years.  First time I was ever forced to kill a man, and it had to be a friend of mine.”

In Ocatilla, Arizona Territory, saloon owner Wick Campbell (Richard Boone) has romantic/material interests in his young female ward Maria Segura (Donna Martell).  When she defects to the protection (and romantic attentions) of young Howie Stewart (Skip Homeier, playing a good guy for a change), Campbell hires ten outlaws (including Leo Gordon and Lee Van Cleef) to start a range war, take over the town and take care of both Howie Stewart and his uncle John (Randolph Scott).  The ten are clearly too much for young local sheriff Clyde Gibbons (Dennis Weaver).  Howie is goaded into a gunfight with one of Campbell’s men, and he surprisingly wins.  Despite the fact that he shot in self-defense, false testimony forces the sheriff to put Howie in jail, but he breaks out.  John Stewart’s brother, peaceable lawyer Adam Stewart (Howie’s father) is killed by Campbell when he refuses to divulge Howie and Maria’s secret location.  Howie blames John for his father’s death. 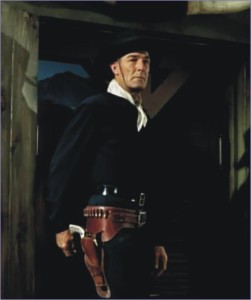 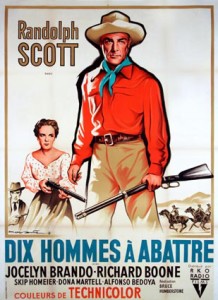 John Stewart:  “You know, Campbell, you’re not thinking straight.  Since you became a big man, you have the idea that everything should be done the way you want it, and that’s dangerous.  Better straighten yourself out before someone does it for you.”
Wick Campbell:  “You, Stewart?”
John Stewart:  “Possibly.”

The malevolent Campbell succeeds to some degree in his war before losing control of his outlaws and being killed by John Stewart.  Then it’s up to Stewart to get rid of the ten.  Stewart discovers Frank Scavo, formerly Campbell’s chief thug, robbing the safe in Campbell’s burning saloon.  During a vicious fight between Stewart and Scavo, a wall falls on Scavo and kills him.  A double marriage follows–John Stewart and Corinne Michaels, and Howie and Maria. 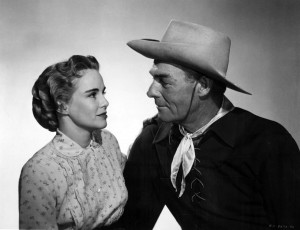 Jocelyn Brando (Marlon’s sister) plays Corinne Michaels, John Stewart’s love interest.  Neither Scott nor Boone shows a glimmer of humor here.  Although Richard Boone was an excellent actor and could be particularly effective at playing a villain (The Tall T, Hombre, Big Jake), this is not his best work.  Boone wears a gun in a shoulder holster under his vest, in an unconventional rig for a western (but see Tyrone Power in 1939’s Jesse James for another example).  Leo Gordon is good as Frank Scavo, the chief thug among the ten wanted men.  There’s a fighting-with-dynamite scene, as in Rio Bravo four years later.  There is some overheated dialogue, and an unnecessarily twisted plot.  Slightly better than average, maybe, but not quite as good as Scott’s best work.  In color, at 80 minutes.  Two years later, Randolph Scott, Richard Boone and Skip Homeier would all reunite in The Tall T, directed by Budd Boetticher.