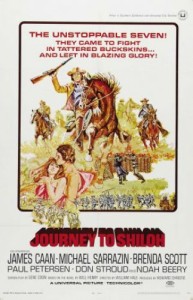 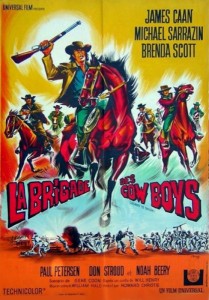 As the title may suggest, this is a Civil War story.  Buck Burnett (James Caan in a bad wig, following El Dorado) is the leader of a band of seven rough-hewn young Texans from Concho County on their way to fight for the south in the Civil War.  It starts out as a road-trip movie for about two-thirds of its length, as the seven make their way from Texas toward the war.  Along the way, hot-tempered gunman J.C. Sutton (Paul Peterson, overplaying his role) is killed in a crooked gambling game.  They try to help a runaway slave make his escape in Louisiana, but he’s caught and hung.  Buck forms a relationship with charming prostitute Gabrielle DuPrey (Brenda Scott) in Vicksburg.

The “Concho Comanches” were originally headed to Richmond, the Confederate capital.  They end up under Gen. Braxton Bragg (John Doucette) at Shiloh, where the last part of the film becomes a “war is hell” story.  Five of the remaining six (Michael Sarrazin, Don Stroud, Harrison Ford, Jan-Michael Vincent, etc.) are killed in various ways, and Burnett loses an arm (although it is rather obviously tucked inside his jacket).  Pretty much everybody dies.  Presumably Burnett heads back to Texas, or to Gabrielle. 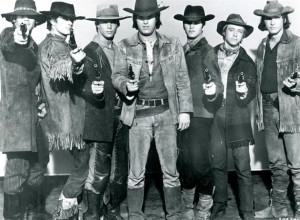 The Concho Comanches, with leader Buck Burnett (James Caan) in the center. On the right end is Harrison Ford in long hair.

Noah Beery and a young James Gammon are Confederate regulars who survive the battle.  The film is based on a story by western writer Will Henry.  Director William Hale only made a couple of movies, spending the rest of his career in television; the same is true of Brenda Scott.  This features very early appearances by Harrison Ford and Jan-Michael Vincent.  Paul Peterson, from television’s Donna Reed Show, also showed up as a young soldier in another Civil War story, A Time for Killing, about this time; his career wouldn’t go much farther.  This features late 1960s pro-civil rights, anti-war themes, not terribly well executed.  In color.