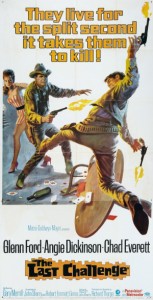 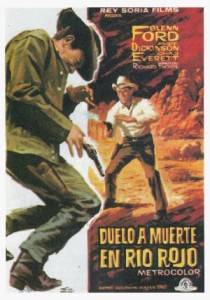 This is a late Glenn Ford variation on the old gunfighter-young gunfighter theme.  Ford is Marshal Dan Blaine, who has a nice life a small western town.  He is the live-in romantic interest of Lisa Denton (Angie Dickinson), local saloon proprietress and madam.  He is a former convict and has a justly earned reputation as being very good with a gun.

Lot McGuire (Chad Everett) is a young man good with a gun himself, and is seeking out Blaine to test their comparative skills.  He encounters Blaine fishing outside of town, and Blaine takes a liking to him, trying unsuccessfully to dissuade him from his plan.  Outside of town Blaine also rescues lowlife Ernie Scarnes (Jack Elam), whom he knew in prison.

Marshal Dan Blaine to Ernie Scarnes:  “Of all the people I know who ain’t worth saving, you’re the first one to come to my mind.”

Scarnes plans to blackmail Lisa with knowledge of Blaine’s past, but she already knows it.  She hires Scarnes to drygulch McGuire; he kills McGuire’s horse, but McGuire gets him.  Blaine finds out and ends up having to kill McGuire anyway.  As he rides out of town and out of Lisa’s life, he tosses his own gunbelt into McGuire’s grave.  This time the old gunfighter has won, but it gives him no satisfaction.

Marshal Blaine (Glenn Ford) has it out with Lisa (Angie Dickinson).

Excellent character actor Royal Dano plays Pretty Horse, a local Indian leader of indeterminate tribe.  This was director Richard Thorpe’s last movie.  Not really bad, but a bit unsatisfying.  This was Glenn Ford’s twentieth western.  He’d been making them for 25 years (see The Desperadoes for one of his earliest efforts), and wore the same hat that he had adopted in the 1950s and wore to the end of his career if given his choice.  Chad Everett was an up-and-coming young star, cast as a young gun in this and Return of the Gunfighter with Robert Taylor, before he moved into television for good.  Compare the gun in the grave touch with Ford’s similar ending to The Fastest Gun Alive ten years earlier (1956), or with the end of High Noon, for that matter, in which Gary Cooper throws his badge in the dust.  In color, at 105 minutes.