Probably an interesting movie could be made about Charlie Siringo, but this isn’t it.  The contents of this short, made-for-television piece are completely fictional.  The real Charlie Siringo was not part Kiowa, as this would have it (his father was Italian and his mother Irish, both immigrants).  He spent most of his career as a Pinkerton agent, not an actual lawman, and he was not exceptionally sympathetic to Indians.  Much of his time was spent undercover working against labor (as in Coeur D’Alene, Idaho, in the 1890s) or in unsuccessfully chasing Butch Cassidy.  He became known principally because he wrote a memoir describing his adventures. 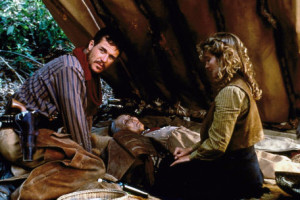 In this slight effort, Siringo (Brad Johnson) lives in Arizona at the San Carlos Apache reservation.  After capturing Texas bad guy Wade Lewis (Steven Macht) who was selling guns to Indians and assassinating their leaders, Siringo is put on leave while he recovers from a leg wound.  Lewis escapes while being shipped to the Yuma prison, and Siringo is sent north after him, accompanied by talkative young deputy U.S. marshal Winton Powell (Chad Lowe).

In Wyoming they find Kaitlin Mullane (Crystal Bernard), a former girlfriend of one of Lewis’s fellow escapees.  Kaitlin has used the proceeds of a long-ago robbery to start a ranch there and go straight.  Meanwhile, Siringo befriends an aging Sioux couple with health problems.  When the outlaws and their gang arrive, the young deputy marshal is killed and Siringo almost is as well. 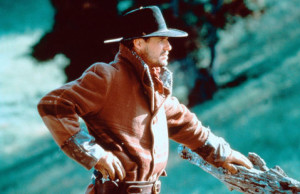 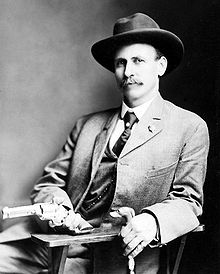 Nursed back to health by the Sioux, he finds and attacks the outlaws Indian-style (bow and flaming arrows, stealth).  In the final shoot-out Kaitlin is killed, and Siringo hauls the despicable Lewis back to Arizona instead of killing him as he really wants to, thus establishing himself as a real lawman.  If it wants us to care what’s going on, this needs to do a better job of developing story and characters, especially Siringo.  Short, at 90 minutes.

For Brad Johnson in another western, see him as bad guy and assassin Beau Dorn in Crossfire Trail (2001), trying to get Tom Selleck. 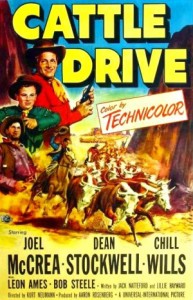 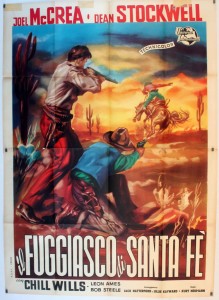 Neglected poor little rich boy Chester Graham, Jr., is the son of a railroad owner who never has time for him.  In a western desert, spoiled young Chester (Dean Stockwell) manages to get left by a train at a watering stop, and he wanders until found by Dan Matthews (Joel McCrea), who’s chasing wild stallion Midnight while on a cattle drive to Santa Fe.

It’s a fairly conventional story in which Chet learns about people, responsibility, fairness and such while growing up a little bit on the trail.  Color is lent by loquacious chuckwagon cook Dallas (Chill Wills) and responsibility by trail boss Cap (Howard Petrie) as well as Dan.  Periodically, Dan and Chet pursue Midnight again, so Dan can start his own horse herd.  They actually catch him once, but he gets away.

By trail’s end, not only has Chet grown up some, but father Chester Sr. (Leon Ames) is trying to turn over a new leaf as a parent, too.  Father and son go off with Dan to pursue Midnight yet again.  There’s not one female role, although Dan shows a picture of a girl he hopes to marry in Santa Fe (the photo is McCrea’s real life wife Frances Dee, who never shows up in person).  Even the bad-ish guy Curry isn’t very bad, so much as contrary. 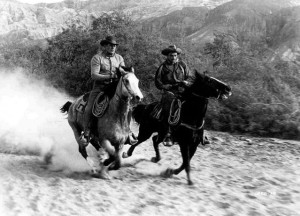 Shot In color, mostly in Death Valley.  Pretty short at 77 minutes.  Kind of like Cowboy, with an Easterner being taught western ways on the drive, and a lot like Captains Courageous, with a boy learning the ways of men.  Not as complex as either, though.  McCrea and Stockwell had worked together the previous year in Stars in My Crown.