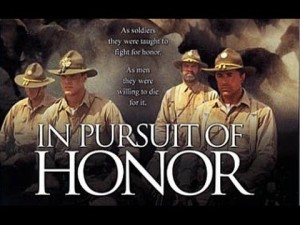 This is a cavalry movie but an unusual one, in the sense that it is set in the 1930s and deals with the death of the cavalry as the army moved from horses to more mechanized forms of equipment.  As it did so, the move affected cavalry veterans who had spent their careers (and perhaps lives) in partnership with horses.  This is one of those films “based on a true story,” which usually means there’s a strong element of fiction to it.  Here, it’s almost all fictional.

Some of these cavalry veterans are part of the unit under the command of Major John Hardesty (Bob Gunton), given the responsibility in 1932 to deal with Hoover’s Bonus Marchers in Washington, D.C.  Many of these marchers were veterans of World War I, who had set up an encampment for the homeless to draw attention to their plight in the midst of the Great Depression.  Under orders from Army Chief of Staff Douglas MacArthur (James Sikking), Hardesty’s cavalry approaches them with drawn sabers to sweep them from the encampment.  [This part about using cavalry against the Bonus Marchers at MacArthur’s orders is factual.]  Several long-time cavalrymen, including Sgt. John Libbey (Don Johnson) and Sgt. Thomas Mulcahey (John Dennis Johnston) return to their barracks rather than participate in such an action against their fellow veterans, and are thereafter exiled to a remote Texas base. 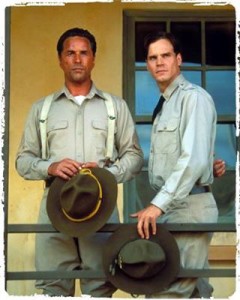 Cut to two years later in Texas, where young Jessica Stuart (Gabrielle Anwar), on her way to the army base commanded by her father, Col. Owen Stuart, almost drives over a young man in the middle of a sandstorm.  He turns out to be Lt. Marshall Buxton (Craig Sheffer), a West Point graduate and son of a former cavalry general, who is in disgrace for punching a superior officer who was mistreating a horse.  Stuart is retiring to Tucson, Arizona, and is being replaced by now-Col. Hardesty.  Hardesty has orders from MacArthur to modernize the unit, which involves getting rid of 500 cavalry mounts.  Specifically, Lt. Buxton is in charge of the men ordered to drive the horses into northern Mexico, where machine gun emplacements and riflemen are set up to slaughter the horses.

After the first hundred horses are driven into a pit and gunned down, Buxton rebels.  Supported by Libbey, Mulcahey and two other long-time cavalry sergeants, they disobey orders and drive the horses north into Arizona–stealing them, in effect, as well as disobeying orders.  Buxton rides to Tucson, where he gets maps and support from the Stuarts.  Jessica Stuart is a reporter, but no U.S. newspaper will tell the story of this incident.  She uses her contacts with a British publication to get the story out.  Col. Stuart, now retired, goes to Washington to try to get MacArthur to change his orders. 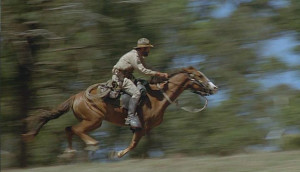 Sgt. Mulcahey (John Dennis Johnston) makes a break for it.

The cavalrymen take their herd of the remaining 400 horses northward into the White Mountains to try to figure out what to do with them.  Their half-baked plan is to take them to Montana onto Indian lands near the Canadian border, where the army can’t go.  Meanwhile, Hardesty pursues with two units:  a mechanized column that has to stick to actual roads, and a horse-mounted unit that Buxton and his group have to keep avoiding.

Stuart hasn’t much luck even getting to see MacArthur.  He is mostly shown working with a map that delineates the progress of the horses as they move northward, pursued by Hardesty.  Buxton is inexperienced, but he is supported by the sergeants, especially Libbey, often referred to as “top,” as in top sergeant.  Although they maintain their military organization, it is clear that everything is done by consent, and they all buy in. 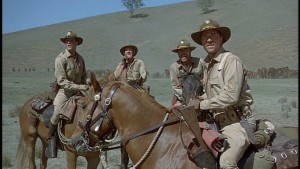 Buxton (Craig Sheffer, left) and his sergeants try to figure how to get into Canada.

[Spoilers follow.]  Finally in Montana, they are accidentally discovered by Hardesty’s cavalry.  That unit has orders to shoot to kill, and Mulcahey gets a bullet in the back as he tries to escape. The sergeant of the cavalry unit stops them to bury Mulcahey with full field honors, to the consternation of the officer who had shot him.  It becomes obvious the fleeing horses won’t make it to Indian land without being cut off, and Buxton and his herd head for Canada instead.  At the border they encounter (a) the pursuing cavalry with artillery, with their orders to shoot to kill, (b) Hardesty and his mechanized unit, accompanied by Jessica Stuart, and (c) a unit of Canadian Mounties facing them across the border.  As they make a final sprint for the border, the cavalry unit arranges artillery to fire at them, but the sergeant makes sure the artillery fires high and wide.  Hardesty divulges that he has tried to get MacArthur to change his orders, to no effect.  He receives word that Pres. Franklin Roosevelt has pardoned Buxton and his men.  As Buxton and his remaining sergeants cross the border, the Mounties seem to accept them.  Libbey goes on the the Klondike, and Buxton says he’s going back to face court martial, and perhaps Jessica Stuart.

Craig Sheffer (A River Runs Through It, The Desperate Trail) is decent as Lt. Buxton, but the performance that makes this work is Don Johnson as Sgt. John Libbey, hard-bitten, flinty, tough and motivated by his notions of military and personal honor.  John Dennis Johnston is very good as Sgt. Mulcahey as well.  Bob Gunton makes Col. Hardesty seem like an officious military bureaucrat with no heart, until the very end.  Rod Steiger’s Col. Owen Stuart has an unexplained faux-Irish accent, and Gabrielle Anwer seems too young for the independent reporter she’s supposed to be.  She is not yet the actress she will become later in her career.  Douglas MacArthur and the order-following leader of the pursuing cavalry are the villains, to the extent there are villains. 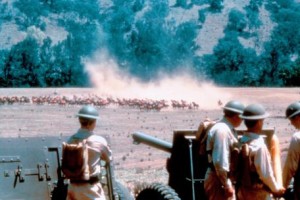 Artillery sets up to blast the horses as they near the Canadian border.

This is better than one would expect, but it’s not perfect.  The pursuit from the White Mountains of Arizona to Montana seems like it takes place in one day, although it would have taken weeks.  The filmmakers needed to find a more effective way to depict the sheer length and effort of such a drive northward.  Sheffer’s Buxton sometimes seems confused (as a real young lieutenant would have been) but strangely confident at other times.  Still, it’s worth watching, although it raises questions about the factual background.  Filmed in color in Australia, at 111 minutes.