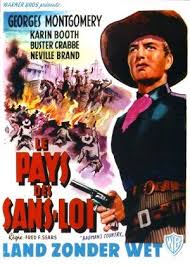 Ten years before Paul Newman and Robert Redford made Butch Cassidy and the Sundance Kid two of the west’s most charming outlaws, there was this reaction to the popularity of television westerns, throwing almost all the lawman and outlaw names they could think of into one not-terribly-coherent western hash.  Butch Cassidy (Neville Brand) is a well-organized but thoroughly bad Butch Cassidy; his Wild Bunch gang includes the Sundance Kid and Kid Curry, but also Black Jack Ketchum and is here operating near Abilene, Kansas.  The principal good guy is Pat Garrett (George Montgomery, wearing his gun quite low and a his characteristic hat with a low crown and broad brim), with backup from Wyatt Earp (Buster Crabbe), Bat Masterson (Gregory Walcott) and a strange, aging Buffalo Bill Cody (Malcolm Atterbury).  Loma Pardee (Karin Booth), the local doctor’s daughter, is Garrett’s romantic interest.

Apparently five members of the Wild Bunch are looking for Garrett, who’s trying to get out of the lawman business.  He kills two of them and puts the other three in jail and wires for help from Earp and Masterson.  In the end, just a few of the good guys overcome and capture about 40 outlaws, including Butch. 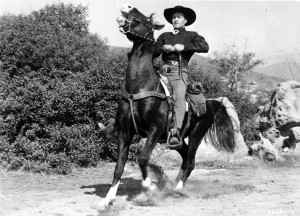 Geographically and timewise, this is one of the most mixed up westerns ever made; the only way it could have been worse is to throw in Davy Crockett (from The Alamo) and Hawkeye (from Last of the Mohicans).  In reality by the time Cassidy had gathered his now-famous Hole-in-the-Wall Gang, Garrett was long retired, Buffalo Bill was touring in his Wild West show, Earp was refereeing prize fights and prospecting for gold in Alaska, and Masterson was a sportswriter for a newspaper in New York City. The low, burning hay bales used at the end to block off the street wouldn’t have stopped any horseback rider who wanted to get over them.  In black and white, at only 68 minutes. 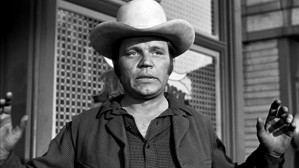