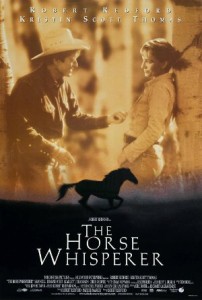 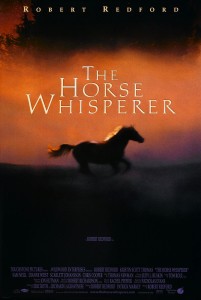 In broad outline, this is a slow-moving easterner-goes-west, collision-of-values story set in modern Montana.  It is also a sort of romance based on a best-selling novel by Englishman Nicholas Evans.

The story is set up in New York.  Two well-to-do thirteen-year-old girls go riding, and there is an accident on an icy road with a truck.  One girl and horse are killed; Grace MacLean (Scarlett Johansson), the survivor, loses her lower right leg and her horse Pilgrim is badly hurt.  Both horse and rider are gravely injured in spirit as well as body, and Grace becomes more alienated from her high-powered parents Robert MacLean (Sam Neill), a lawyer, and English-born Annie (Kristin Scott Thomas), a magazine editor.  Distance seems to be developing between the parents as well.

As Annie researches healing for the horse (as a way of healing her own relationship with Grace), she runs across references to “horse whisperer” Tom Booker of Montana, who has miraculous results with injured animals.  Booker declines to come to New York for consultation, and on an impulse Annie decides to haul Pilgrim and Grace west to Montana, somewhat against Grace’s wishes. 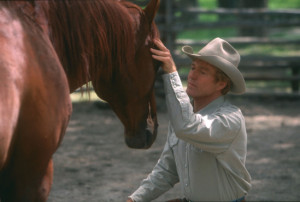 The bulk of the story develops as Annie, Grace and Pilgrim spend time at the Booker ranch, which Tom (Robert Redford) runs with his brother Frank (Chris Cooper) and Frank’s family.  Tom is divorced, having once married a cello player he met while studying engineering in Chicago but who found there was “too much space” in Montana.  Results come slowly, both with Pilgrim and with Grace.  As they are exposed to ranch life and Booker family relationships, both Annie and Grace also start to come out of their shells.  Frank’s wife Diane (Diane Wiest) is a practical, earthy type, who helps hold the emotional life of the extended family together.  Annie loses her editor’s job in New York, and finds herself being drawn to the taciturn Booker in his own world.  She also finds different rhythms in ranch life than she has been used to in New York.

Annie:  “I haven’t ridden Western before.”
Tom Booker:  “Yeah, but he doesn’t know that.  Just sit on the horse.” 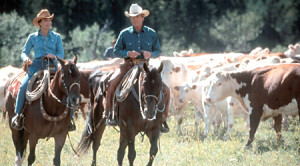 As Annie and Tom draw closer, time passes, and eventually Robert comes from New York to see what’s going on and if he can reclaim his family.  Pilgrim is doing better, but it’s very slow going.  Finally, Grace does ride Pilgrim as a kind of healing milestone for both of them.  She flies back to New York with her father, while Annie wrestles with when, and whether, to go back.  Of course, Booker being the kind of man he is, she has to go back.

One could say that there are pacing problems with this movie.  After all, the unrushed set-up takes 45 minutes to tell what could have been done in fifteen or fewer, and the entire film is almost three hours long (170 minutes).  But that’s part of the point of the whole enterprise:  healing and finding yourself take time, patience and honesty, which are all in short supply in the modern world.  In the end, you have to approach this willing to go with its flow, but it works well on that basis.  Time, as well as the land itself, seems to be different in western Montana. 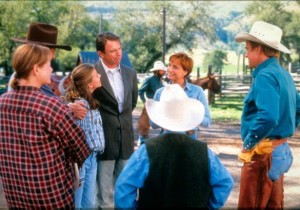 Robert MacLean (Sam Neill, center) comes west to see about getting his family back.

The depiction of ranch family life through Frank’s family and partnership with his brother Tom are very successful.  The casting is excellent.  Chris Cooper is perfect as Frank Booker, and Diane Wiest, who seems a very New Yorky sort of actor from her other roles, is also very good as Frank’s wife.  Young Ty Hillman as Frank’s son Joe is very good, too, although he hasn’t been seen much since this film.  Sam Neill does well in the thankless role of the underappreciated good husband, and Scarlett Johansson’s performance as Grace is mostly persuasive and helped propel her toward her current success in movies.  This was Kate Bosworth’s first movie; she plays Grace’s friend who doesn’t survive the accident.  Jeanette Nolan (often a mother-figure, as in Hangman’s Knot, 7th Cavalry, Saddle Tramp, The Man Who Shot Liberty Valance) plays the mother of the Booker brothers; it was her final film appearance.

Redford as Booker is the spiritual center of the movie, and this casting is perfect.  He bought the movie rights to the book before it was published, so he cast himself.  Despite the fact that he was then 62 and Scott Thomas was 24 years younger, Redford looks great and the relationship is believable.  Scott Thomas does well, although she doesn’t seem as unique in this role as the weathered Redford does in his.  It’s hard to see this without wanting more of Redford in westerns, but he shows up mostly in them when he was much younger:  Butch Cassidy and the Sundance Kid and Jeremiah Johnson are the most notable, of course, and then there’s The Electric Horseman with Jane Fonda, another modern western.  Most similar in spirit to this is another beautiful Redford-directed film set in western Montana of the 1920s and 1930s:  A River Runs Through It, with Craig Sheffer and Brad Pitt (1992). 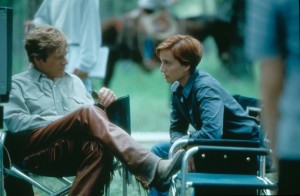 Overall, this is primarily a romance, but it has a very western spirit and look about it.  The romanticized landscape is very Redfordian.  Part of the leisurely pacing is given to spectacular cinematography by Robert Richardson (a number of well-integrated aerial shots), with a good, but spare, screenplay by Eric Roth and Richard LaGravenese.  Shot on location in western Montana, near Livingston and Big Timber.

The credits list as an “equine technical adviser” Buck Brannaman.  An actual horse whisperer in real life, Brannaman is also the subject of a 2011 documentary entitled simply Buck.