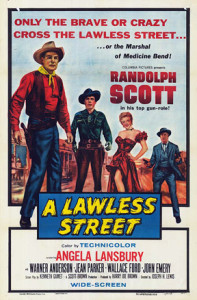 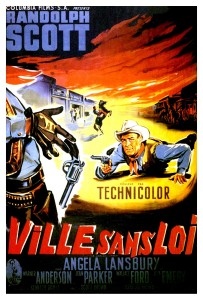 The lawless streets in question are in the town of Medicine Bend.  Calem Ware (Randolph Scott) has been brought in as marshal by large rancher Asaph Dean (James Bell), founder of the town of Medicine Bend.  (See Randolph Scott in another Medicine Bend the next year, in Shoot-Out at Medicine Bend.)  Ware is good with a gun and demonstrates that he doesn’t mind using it, but he seems a bit haunted by something.  When Dingo Brion tries to kill him as he’s getting a shave, he finds five $20-dollar gold pieces in Dingo’s pocket, meaning that somebody’s paying to get Ware killed.

There is little hiding that one of the prime candidates as this paymaster is saloon owner Cody Clark (John Emery), who thinks he’d do better business in a more open town. His silent partner is businessman Hamer Thorne (Warner Anderson), who similarly hopes to prosper when a mining boom hits. The sleazy Thorne has been carrying on an affair with Dean’s wife Cora (Jean Parker), but plans to throw her over for Tally Dickinson (Angela Lansbury), a stage performer he’s just brought into town. 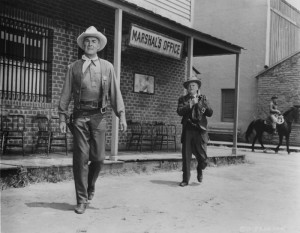 However, Tally is still married to Calem Ware, although they haven’t been together in eight years.  When he was the marshal in Apache Wells, she couldn’t take worrying about the violence of his profession.  When they meet again, it seems they still have feelings for each other, but neither changes the attitudes that drove them apart.  Thorne and Cody bring in a gunfighter with a special enmity for Ware, Harley Bascomb (the saturnine Michael Pate).  Intrigued by the high price they’re offering, Bascomb demands a third of their operation.

Unaware that Ware has injured his gun hand in a fight, Bascomb calls him out and creases his skull when Ware can’t handle his gun as well as usual.  As Ware falls, his friend Doc Amos Wyatt (Wallace Ford) pronounces him dead and removes the body to where he can recuperate in private while everybody thinks he’s dead.  Meanwhile, the town blows wide open, and Thorne and Cody challenge Dean.  Seeing what’s happening, both Tally and Dean’s wife desert Thorne.  When Ware recuperates enough, he has it out with Bascomb again, this time winning by a stratagem.  As Thorne and Cody prepare to leave town, Thorne kills Cody thinking he’s Ware, and Ware captures Thorne.  Turning both Thorne and his marshal’s badge over to the newly-invigorated forces of good in the town, Ware heads off to his ranch with Tally, leaving his career as a marshal in Medicine Bend and giving his gun to Doc Wyatt. 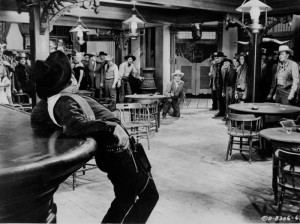 This is a fairly complicated plot for a movie of only 78 minutes, with lots of coming and going.  Scott seems a little too sunny of disposition for a man who kills several people in the course of the film and has several large-scale personal problems.  Angela Lansbury is a step up from the usual female lead in a Scott movie, but there doesn’t seem to be a lot of actual chemistry between them.  Still, this is a better-than-average Scott western from the early 1950s, made just about the time he was starting his association with Budd Boetticher.

Screenplay by Kenneth Gamet, who wrote eight Scott westerns in all.  In color.