Many westerns include saloons, gambling and sometimes a card game for high stakes.  Among those where card games or tournaments are central to the plot are the following movies. 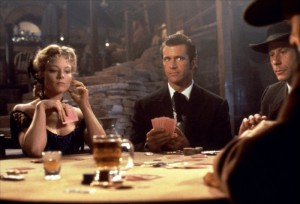 The Virginian, in various versions of the 1902 novel (most recently in 2000):  A card game includes the story’s most famous line, delivered by the Virginian to Trampas: “When you call me that, smile.”
The Iron Mistress (1952):  In this fanciful biopic, land speculator and knife fighter Jim Bowie (Alan Ladd) participates in a couple of big games.
Dawn at Socorro (1954):  A Doc Holliday-figure (Rory Calhoun) plays for the future of a dance-hall innocent.
The Mississippi Gambler (1953):  Before the Civil War, a riverboat gambler (Tyrone Power) defies the odds and crooked gamblers to play an honest game, amid romantic complications and duels.
The Gambler from Natchez (1954):  An army veteran (Dale Robertson) in the 1840s seeks answers about the death of his gambler father.
Scalplock (MfTV, 1966): A gambler (Dale Robertson) wins an unfinished railroad in a card game.
Big Hand for the Little Lady (1966): A compulsive gambler’s wife (Joanne Woodward) finishes the big card game.
Five Card Stud (1968): A card game leads to a lynching and a series of murders by parties unknown.
A Thousand Pieces of Gold (1991): The fate of a young Chinese woman in an Idaho mining camp is decided by a card game.
Maverick (1994):  In this reboot of the 1950s television series, Mel Gibson spends most of the movie trying to raise a stake for the big game, and then plays in it.
Triggerman (2009, direct to video):  A legendary gambling outlaw (Terence Hill) enters a wild tournament.

According to western legend, Wild Bill Hickok was holding a hand of black aces and eights in a saloon in Deadwood, Dakota Territory, when Jack McCall killed him from behind in 1876.  Since then, that hand has been known as the “Dead Man’s Hand,” a token or predictor of death. 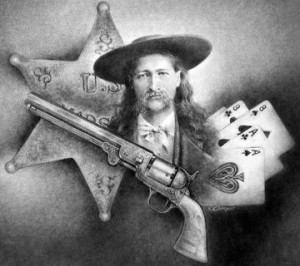 Aces and Eights (1936):  Col. Tim McCoy plays for high stakes to save a Mexican family.
The Plainsman (1936):  This highly fictionalized story of Bill Hickok (Gary Cooper) ends with his death in Deadwood.
Stagecoach (Luke Plummer, 1939):  When the Ringo Kid (John Wayne) arrives in Lordsburg seeking revenge for the killing of his family by the Plummer brothers, Luke Plummer is holding the Dead Man’s Hand.
The Man Who Shot Liberty Valance (1962):  Loathsome outlaw Liberty Valance (Lee Marvin) holds the deadly cards in this John Ford film.
Wild Bill (1995):  Wild Bill’s last days in Deadwood include the famous card game in this version from director Walter Hill. 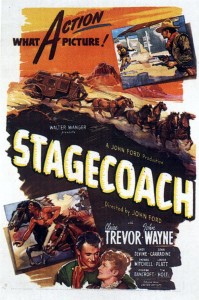 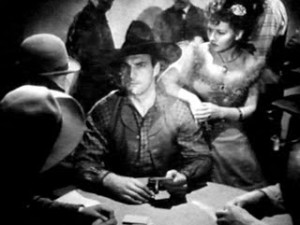 Claire Trevor in The Desperadoes (1943)