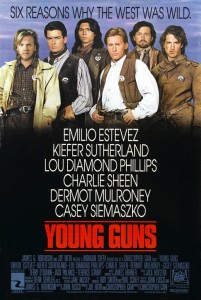 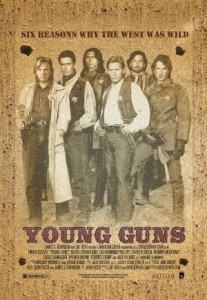 This was an attempt to combine the youth movies of the 1980s (e.g., The Breakfast Club, Ferris Bueller’s Day Off) with the western genre and the story of Billy the Kid.  The result was surprisingly successful at the box office.  Many historical elements of The Kid’s story are here:  the murder of John Tunstall (Terence Stamp), the background of the Lincoln County War, the siege at the house of Alexander McSween (Terry O’Quinn), and the role of L.G. Murphy (Jack Palance) and the Santa Fe Ring in New Mexico Territory of the time.  But the details are not particularly accurate and the story is not complete, leading to the eventual sequel Young Guns II (1990).

In 1878 transplanted Englishman John Tunstall owns a ranch outside of Lincoln.  He collects ne’er-do-well young men, not for immoral purposes (despite an accusation by the obnoxious Murphy) but to give them jobs and civilize them, teaching them basic manners and to read and write.  His most recent acquisition is wild young William Bonney (Emilio Estevez).  As tensions rise between Tunstall and the Murphy-Dolan ring that runs Lincoln County, Murphy’s men, including the Lincoln County sheriff, blatantly murder Tunstall on the road to his ranch.  In reaction to the killing, his young men become “regulators”—a traditional word used by vigilantes in range wars to give themselves an air of real authority.  Led by Tunstall’s foreman Dick Brewer (Charlie Sheen), who tries to keep them respectable, they include:  Billy, who is wild, good with guns, bad with authority and erratic; Doc Scurlock (Kiefer Sutherland), who is more educated than the others. writes bad poetry and is infatuated with Murphy’s young Chinese captive; José Chavez y Chavez (Lou Diamond Phillips), half Navajo and half Mexican, good with knives; Charley Bowdre (Casey Siemaszko), whose skills are pugilistic and who would like to get married; Dirty Steve Stephens (Dermot Mulroney), the least interesting and articulate (and filthiest) member of the group; and J. McCloskey (Geoffrey Blake), who may be a spy for Murphy.

Billy [after shooting a Texan in a bar who was boasting that he would kill Billy the Kid]:  “How many does that make, Doc?  25?”

After Billy kills Henry Hill and starts a gun battle that results in other deaths, the gang loses any vestige of respectability.  Billy kills McCloskey.  Bounty hunter Buckshot Roberts (Brian Keith) comes after them.  Dick is killed by Roberts, and several others are wounded in a wild shootout.  Historically Roberts was killed by Billy and his friends, but it’s not clear that happens here.  Billy becomes the de facto leader of the group and kills the corrupt Sheriff Brady, telling him, “Reap the whirlwind, Brady!  Reap it!”–a Biblical reference.  Pat Garrett (Patrick Wayne) warns the Kid about a plot to kill Tunstall’s partner and lawyer Alex McSween (Terry O’Quinn) in Lincoln.  Garrett says he’s the Kid’s friend (historically, he may have been), but it’s not clear whether he’s giving a real warning or setting up the Kid and his gang for an ambush.

They take the bait, though, and go to Lincoln to warn McSween.  They’re barely inside McSween house when it is surrounded by Murphy’s men, bounty hunter John Kinney and his men and eventually a cavalry unit.  The siege carries on into the next day (historically the siege lasted five days), and the besiegers set fire to the house.  The gang tries to break out, and they are all at least wounded.  Billy is shot a couple of times but kills several, including Murphy (not historical) and gets away.  Scurlock escapes with a young Chinese woman who had been held captive by Murphy.  Chavez y Chavez makes his getaway and heads west.  Stephens dies, as does the newly-married Bowdrie, but not before killing Kinney.  (Historically, Bowdre did not die at the siege.)  McSween tries to surrender but is cut down by a gatling gun.  The seige ended the Lincoln County War, but not the Kid’s career, which had another three colorful years to go.  Although there is narration telling what became of the three who lived, matters are now set up for a sequel with another director. 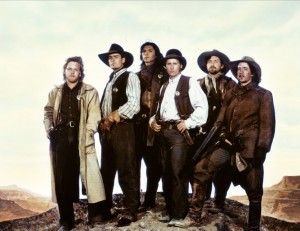 Billy:  “Alex, if you stay they’re gonna kill you.  And then I’m gonna have to to go around and kill all the guys who killed you.  That’s a lot of killing.”

Billy and his friends (real historical characters) are depicted as juvenile delinquents with a grievance, and Billy as played by Emilio Estevez has a wild, psychotic edge to him (with a bowler hat).  As Dirty Steve puts it, “He ain’t all there, is he?”  Estevez’ Billy is more literate than the historical Billy probably was.  Doc Scurlock and Chavez y Chavez are the most notable of the gang.  Dermot Mulroney’s character is not very interesting, but he can do much better; see him in Bad Girls, for example.  Casey Siemaszko is good as Charley Bowdre.  Terence Stamp is excellent as Tunstall, and Palance plays bad-guy Murphy broadly.  The cameos with Brian Keith (as Buckshot Roberts) and Patrick Wayne (soon-to-be-sheriff Pat Garrett) are fun, but Wayne would be replaced by William Peterson in the sequel.

If you look quickly, you can catch an uncredited cameo by Tom Cruise, who was visiting the set and put on a mustache and costume.  He’s the first man shot by Charlie Bowdre during the siege at the McSween house.  This was probably the peak of the career of director Christopher Cain (born Bruce Doggett in South Dakota), who also directed The Next Karate Kid and the execrable western September Dawn (a version of the Mountain Meadows massacre).  Filmed in New Mexico, in color, at 107 minutes. Rated R for violence and lots of killing. 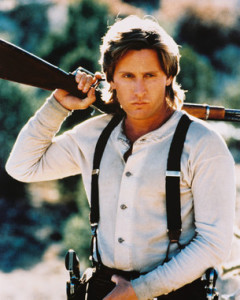 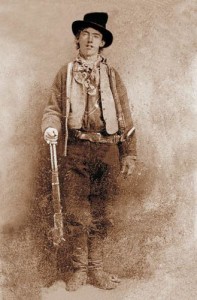 Emilio Estevez is somewhat glitzier than the real historical Kid, as is usually the case in movies about Billy.  He joins a black-leather clad Robert Taylor and blue-eyed Paul Newman as cinematic Billys.  For historical Billy, you might start with Robert Utley’s Billy the Kid: A Short and Violent Life (1991) and High Noon in Lincoln: Violence on the Western Frontier (1990).  For readability, try Billy the Kid: The Endless Ride, by Michael Wallis (2007).  He was said to have killed 21 men, one for each year of his life, but the best count is around eight, more or less.